This wasn’t a one time phenomena, but carefully orchestrated event with decades of involvement and planning. June 11th’s Convocation became a vital part of a week dedicated to ridding the world of nuclear weapons a week put together by scores of organizers coalescing, many under the banner Mobilization for Survival (MFS) founded in 1977 by long experienced activists, and the Freeze campaign (morphed from SANE of the 1960’s), and other movements dedicated to end both nuclear power and nuclear weapons, and war.

The single most highly qualified person to lead The Religious Task Force, organizers of June 11th, a specific arm of MFS, was the Reverend Paul Mayer. In early 1978, one by one he began writing and calling faith leaders the country over. Over decades of activism he had trust built with allies from other causes. No faith was left out, and all became part of this beautiful team that carries on within our hearts today.

Rev. Mayer was a true natural, born into this selfless service, having been a Jewish refugee from Nazi Germany. As a 6 year old child he witnessed his synagogue burned down. This would re-inforced in him early on the dedication to co-found Children of War, helping teens cope with the survival of wars.

After his death in 2013, Felton Davis of the NYC Catholic Worker recorded and posted one of Rev. Paul Mayer’s consistent anti-nuke speeches, here on March 28th, 1981, the second anniversary of Three Mile Island at a demonstration. Listen to his voice:

To get a sense of the build up by the Religious Task Force for the June 11th event, this is taken from their 1979 flyer: “In spite of the declaration of the recent U.N. Special Session on Disarmament [1979] that it’s discussions would “provide and powerful impetus for the use of disarmament.” the arms race continues and escalates. The development of new first strike strategic weapons makes a nuclear war an imminent danger as never before…… Nor have the six thousand limitation and disarmament talks between the U.S. and the U.S.S.R since WW II dismantled even one nuclear weapon…..

This deadly radioactive legacy will be handed down to the children of coming generations, a legacy posed by force and without the option of reversibility ….

Thus by a a new king of demonic counter-creation the very eco-system — that earth with God called “good” and “very good” — would be turned into a radioactive wasteland.”

The 1979 Religious Task Force flyer then calls in much the exact language of today’s new international law, the Treaty on the Prohibition of Nuclear Weapons.

“STOP THE TESTING, RESEARCH, DEVELOPMENT AND PRODUCTION OF NUCLEAR WEAPONS.
…. CEASE THE TRANSPORT OF NUCLEAR MATERIALS EXCEPT THOSE CLEARLY INTENDED TO PROTECT HEALTH.”

This straightforward Religious Task Force flyer, one of several, three years before the great June 11th Convocation opens with, “In the name of the world’s survival we say Stop! In the name of the Spirit of Life we call on all people of good will to demand that our government initiate an immediate Nuclear Moratorium, as an example to other nations, and as a first step to human survival.” 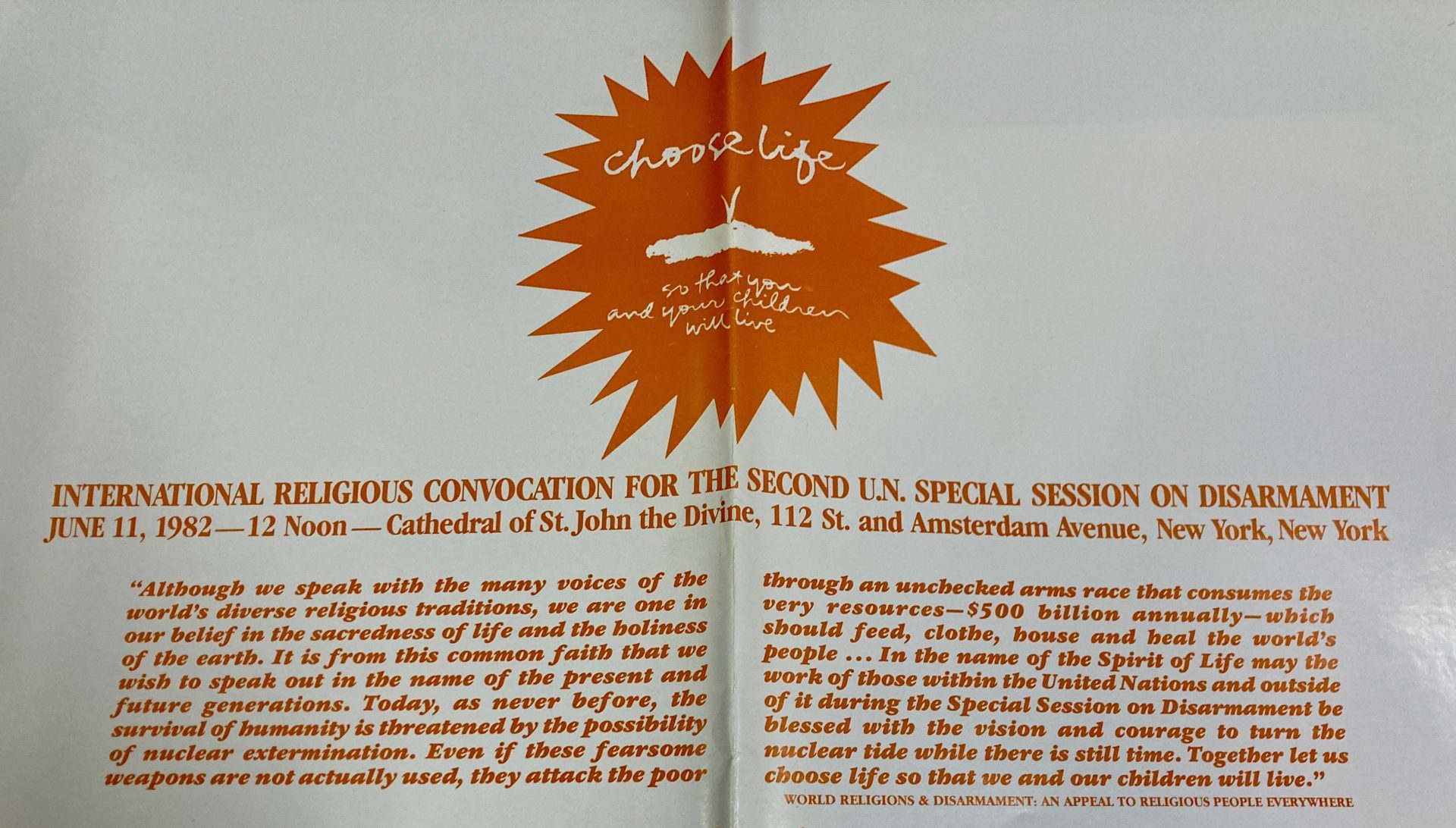 The Religious Task Force then calls for “safe, clean sources of energy “(Nuclear power is neither). And calls for” the economic conversion of the military and nuclear industry jobs toward those for humanities uplift and benefit.”

But naturally our empire has not proven to be a leader of a state “of, by, for the People”. The nations of the earth have had to again and again rise up to protect the whole, this time with the TPNW, which includes the protection of our own USA, in spite of ourselves, and the gravely irresponsible other nuclear states an allies that support the industry.

The TPNW is a grand echo of the Convocation on June 11th, 1982, pulled together the many decades of direct evidence from those who know best around the world of the the realities and consequences of the nuclear weapon industry on humanity. The new Treaty has been the answer to this Convocation, this most profound prayer and plea of humanity since awakening to the first weaponized atomic explosion on Aug. 6th, 1945.

The signers listed here are only a very partial list of members of the Religious Task Force gathered since 1978 by Rev. Mayers and others. They gathered not only in manifesting the Convocation at the Cathedral on June 11th 1982 but had gathered and put out numerous public statements leading up to it, such as their three years earlier, 1979 “Religious Call for a Nuclear Moratorium”

Many below were at this work for decades before the June 1982 achievement, and continued until they left the world. In his last decade of life Rev. Paul Mayer who headed up this Religious Task Force was till the end, devoted to earth justice, climate and a sustainable planet. He co-founded the Climate Crisis Coalition in 2003. Just months before his death he was arrested in 2012 again advocating for fair housing for the homeless. These souls knew the connection of militarism and the health of humanity and our biosphere:

The New York Times in 1979 quotes the message of The Religious Task Force in one of the interfaith meetings: “A call for a nuclear moratorium is a radical expression of our hope that there is still time for a deep spiritual conversion from our present values to something new.”

The faith leaders then urged marching on Washington DC that following Sunday in protest of nuclear power and weaponry.

The article goes on with Rev. Paul Mayer, “The greatest moral and ethical problem that confronts religious people is undoubtedly the nuclear crisis. It is symbolic of the entire spiritual crisis of our century. With the threat of nuclear energy and weaponry it has become clear that we are now in the realm of the demonic.”

Bishop Paul Moore of the Cathedral of St. John the Divine stepped up and continued saying a drive by religious groups must concentrate on “a peace movement so profound as to touch the source of the evil of the arms race.” He decried that, “the use of billions and billions of dollars on defense spending is raping and killing the poor.”

In the years leading up to the June 1982 events, it was clear to the various organizers that there would be a series of events to answer the different needs and styles, not simply one. All would plan to participate in the June 12th rally together, but a Religious Convocation beforehand, June 11th. For those who believed that the decades of negotiating and talks were going nowhere as the omicidal weaponry only escalated, a day of non-violent civil disobedience, Blockading the Bombmakers, was called for on June 14th. Those involved in civil disobedience would be required to undergo non-violent trainings beforehand.

There were vigils and actions from the eve of the Special Session of the UN June 7th, and workshops and teach ins the weeks before. The year long Peace March would end, arriving at the gates of the U.N. that June 7th, for the opening of this Second Special Session on Disarmament. The March’s inspirer Fuji Guru would participate in the Cathedral’s Convocation June 11th, and address the crowd in Central Park on the 12th. These monks would attend and pray during the civil disobedience on June 14th along with other faith leaders.

After the June 11th Convocation at the Cathedral, the thousands all processed to Central Park together. They planted a tree, and held a sacred blessing of the tree and life on earth. The Religious Task Force also organized an all night vigil of prayer outside the United Nations. Each hour through the night had a different faith organization responsible. All and any were welcome at anytime to participate in this vigil that entered us into the famed June 12th historic gathering to end nuclear weapons.

The Cathedral of St. John the Divine in preparation also held a series of ten consecutive weeks of keynote speakers around the issue of disarmament, titled “Disarmament or Nuclear Holocaust?”:

Some of the notable keynote speakers were: 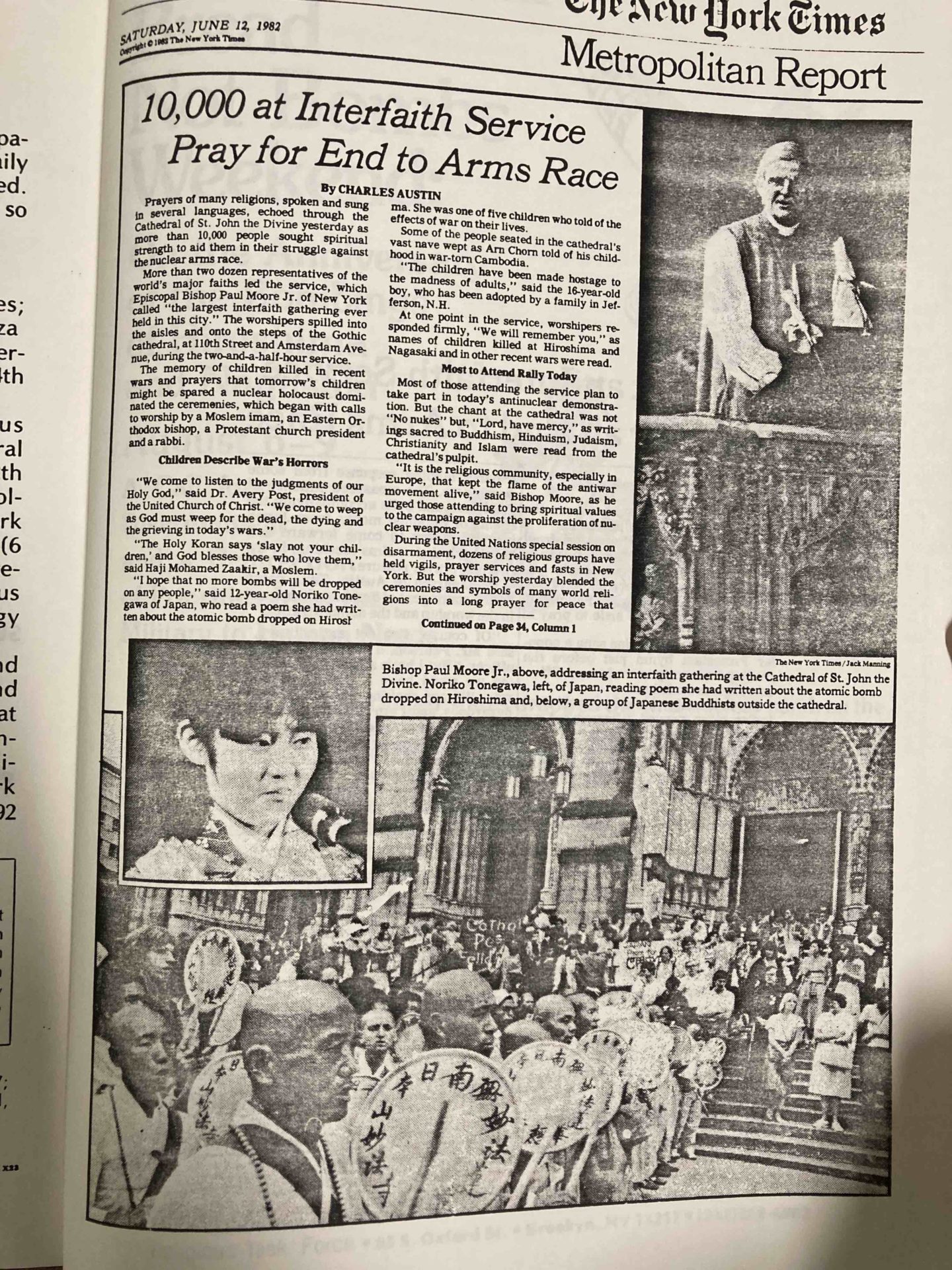 Anthony Donovan
A political campaigner and activist from the age of 12, ending up in jail three times for Vietnam War nonviolent civil disobedience. Donovan is the producer of several documentaries, including: “Dialogues: A more effective path to deal with global terrorism" (2004), and “Good Thinking, Those Who’ve Tried To Halt Nuclear Weapons” (2015). His long time passion remains the abolition of nuclear weapons.