Whoever starts armed aggression is never sympathetic, but we have Putin to thank for the fact that the West has dropped its mask.

For decades, Russia has been complaining about NATO aggression by extending its borders to make Ukraine its pawn. If they wanted to know Russian firepower, they got it. On top of that, they have made a huge bargain because Ukraine mortgaged its enormous natural wealth for generations to pay for the effort to defend its fascist oligarchy.

Those who complain so much about breaking the rules of international law are the real offenders because they broke their own agreements: not only did they not dissolve NATO, but they enlarged it in the face of constant warnings from Russia.

Those who accuse the alleged genocide by the Russians (which cannot be qualified as such), not only concealed but continue to conceal the real genocide in the Donbass and the concrete criminal acts in its current defence[1], including and most especially, the atrocities in Mariupol and a few days ago in Kramatorsk. Moreover, the Western media and institutions organised without publicity the largest NATO military manoeuvres in countries bordering Russia, with Ukraine as the main protagonist given that with its contribution the number of troops concentrated there during 2022 would reach 100,000. It was no coincidence that Putin concentrated so many troops on the border. In other words, with the excuse of “manoeuvres” they would be creating a certain risk of an attack on the Russian Federation, something that the media have kept quiet until today and which Maria Müller reports in detail from Moscow [2]. It is not only her article that is worthwhile, but even more so her references. So, it is clear that the military operation undertaken by Russia was very special, an early defensive move to show that it would not be taken unawares.

Those who accuse of the alleged use of banned weapons are those who sponsor their use by the Ukrainians, and by warning of the possibility of being victims of chemical weapons, seek to divert attention from the laboratories they paid for and sponsored [3].

Those who declamatorily defend their freedom of expression ban the media of those who are not the declared enemy. One could justify the dissemination of enemy propaganda, but when did NATO declare war against Russia? And social networks, so free for white supremacist hate speech, banned Russian information. If the freedom of speech was a cherished feature of so-called Western Democracy, it was revealed for what it is, a crude mask of domination.

Those who wave international treaties (the UN is one) nevertheless sponsor those who break them (those signed in Minsk for peace in the Donbass).

The West has been exposed to the divergence between its discourse and its practice.

And I say nothing about the possible collusion of the aspiring “Leader of the Free World” with the manufacturers of weapons, including chemical and biological ones. We have seen that bats can be more lethal than missiles [4].

The pandemic exposed the disregard of Western leaders for the care of health systems and at the same time the brutal reality of neoliberal capitalism.

Putin’s own European imaginary was exposed by the reaction to his “special military operation”.

The implicit racism of the US was exposed through the militancy of black organisations (Black Lives Matter and others); Europe, now, through its discourse on the conflict in Ukraine and in particular the migration of its population to neighbouring countries. Europeans interviewed by the media did not recognise Ukrainians as migrants because they were not like black people from Africa and the Near East.[5] The Ukrainians themselves demonstrated their racism in their treatment of Africans who wanted to return to their countries of origin [6].

The Western media covered up the Nazis who took over Ukraine’s state structures since the Maidan and who, in Zelenski’s words “are what they are”; as well as the weight of their specially trained American and British battalions; and worse, the atrocities they committed in the Donbass for eight years. Now they talk about them, but they are whitewashed by presenting them as patriots among whom there are “extreme right-wing elements”[7].

What was suspected came to light: Nazism did not lose the Second World War because, although it was unable to conquer Europe militarily, it was able to dominate it economically with the generous subsidy of those who were supposed to be its enemies, the mentors of the Marshall Plan. This, at the same time as they gave refuge to the hierarchs, as in the case of Stepan Bandera, if I stick to the Ukrainians.

What seemed to be a colourful note in spy or political intrigue films, seems to emerge as the stark reality: Nazism, or the belief in the supremacy of the white race, is in the cultural substratum of the West. The media [8] have highlighted this with regard to the way the news treatment of the ‘war’ in Ukraine has been handled.

If we review the history and propaganda culture of the 20th century, we will find that, as Putin said, since the end of the 19th century the US wanted to dismember Russia. And there is a logic to it: a territory that is more than twice the size of theirs, with more natural resources and a population that is barely half their size. It couldn’t be more tempting.

That is why Wall Street and the Germans helped Lenin and Trotsky to fulfil their revolutionary dream [9]; why the Holocaust occupies its place among the monstrosities of the 20th century but not the 25 million Russians who died at the hands of the Nazi army; why the Second World War was successfully installed in the world imagination that the US won it with its decisive intervention at the last moment (as in the First), and not the Russians who defeated the bulk of the German army in the eastern campaign.

In short, the Third War began with the treaty that ended the Second, and the Nuremberg tribunals were nothing more than a staged attempt to appear to comply with Western libertarian discourse.

After all, the Cold War was a war and the US succeeded in dismembering its enemy. The rest was the fireworks of consumer capitalism that dazzled the masses, but not their leaders. Russia and China stood up and allowed themselves to be penetrated by Western corporations. The same ones that today are trembling for their investments. For if Russia once regained control of its natural resources and treats the corporations with consideration but also with firmness, they are certainly terrified of what might happen if China makes a parallel move. Suddenly the “labour” countries may cease to be “labour” countries.

The expansion of corporations was one of capital and executives, into politically alien territory even if they could dictate its leaders. The material wealth of corporations is not where their financial wealth or their heads are, so the importance of military force regains its relevance as in the days of the gunboats.

But all this is far removed from the ordinary citizens who suffer from the colonising culture, the mass information that sustains the supremacist preaching with the illusion that they are superior just because they believe they are, ignoring the diversity of the human.

There is nothing we can do to change the course of history, which is quite unfortunate from what we can see, if we allow ourselves to be taken over by this imaginary exclusion of the majorities that inhabit this planet, our world. It is clear that it is the leaderships that have the power to decide our immediate destiny.

But these leaders are sustained by the belief in this lying democracy that covers up corporate structures (the fascist states were corporatist, even if they were state corporations) that are the real holders of power.

This is where ordinary citizens can begin to take the reins by seeking and relaying the right information; by denouncing discrimination and lack of freedom of information; by exposing the violence of official discourse, mainly from the northern nations; by taking votes away from the representatives of the corporations, of course, but also by activating for a real, participatory democracy.

The war of communication, which, as Mariano Quiroga said, was never cold [10] and the prefabrication of news, are the order of the day in Ukraine [11]. This is easy to see with the massacres provoked by the Ukrainian army with two Tochka U (missiles with fragmentation bombs). On 14 March in the centre of Donetsk, silence followed the disaster. No one was accused, and Ukrainians only by the “separatists”. A few days ago, with the massacre in Kramatorsk, the Russians were immediately accused. Of course, they had seen the vein they had discovered with the civilian dead they “planted” in Bucha. Only, faced with the incontrovertible proof that it was not an Iskander, as they immediately claimed, but a Tochka U, whose number plate was shown by an Italian journalist and turned out to be from the same industrial batch as another one launched in 2015 over the Donbass. In the programme that was shown, an almost comical scene was generated by the attempt to disqualify it, which highlights the anti-Russian bias of the media [12].

This real war, waged around military actions, had already begun years ago. It is a cultural war that is not only played out in the mass media.

Culture is influenced by the media but lives in the people, in everyday communication, person to person, where the human is at stake every day. In other words, the battlefield of this Third War, which has been going on for decades, is our everyday life. 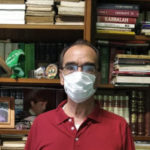