Many journalists, these days, prefer to remain anonymous in Ukraine. And from some of them now comes this story:

One of the most well-known and popular journalists in Ukraine was yesterday arrested by the officers of the Security Service of Ukraine. Unfortunately, the dramatic situation in our country is being used for “cleansing” of opponents, in gross violation of all legal and juridical procedures.

Yuriy Tkachev is a journalist from Odessa, Ukraine, editor-in-chief of the online magazine https://timer-odessa.net/.

He was very critical of the former and also the current Ukrainian government for its policies afterwards the Maidan, and especially regarding the “Odessa massacre of May 2, 2014” and “Shootings on the Maidan”, whose investigations were stalled, postponed for many years and until today not concluded, among others.

Yesterday, on 19 March 2022, he was in his flat in Odessa when, at about 7:00 a.m., he was arrested by Ukrainian Security Service (SBU) officers, who during the search found, in the words of his wife, “an explosive and a hand grenade”, allegedly belonging to Yuriy Tkachev, in the bathroom of his flat.

Yuriy Tkachev’s last message, just before he opened the door to the SBU agents, at 6:34 a.m. on his personal Telegram group, reads: “They came for me, it was a pleasure to talk”.

All claims that Yuriy Tkachev opened a new channel on Telegram afterwards after his alleged release from the SBU are false. I was able to contact Yuriy’s wife, Oksana. She said that Yuriy is being interrogated by the SBU, and she did not have the opportunity to get into her husband’s accounts, because all computers and mobile phones were in the hands of the SBU. The lawyer is not allowed to see Yuriy. Oksana said that they really need support for the dissemination of the facts”.

According to her, when Yuriy opened the door of the flat, he did not put up any resistance. Despite this, the SBU dragged him into the hallway of the portal, laying him face down. Oksana was also asked to leave the flat. No violence was used against her.

Oksana claims, that through the open entrance door she saw how one of the SBU officers entered the bathroom and stayed there for several minutes. In this same bathroom, in a few minutes the SBU would “discover” a “grenade and a TNT bomb”, Oksana said.

After this man came out of the bathroom, the SBU officers took Yuriy and Oksana back to the flat, where the register began. At the same time, they forced Yuriy to take off his clothes, only allowing him to get dressed again before they took him away. 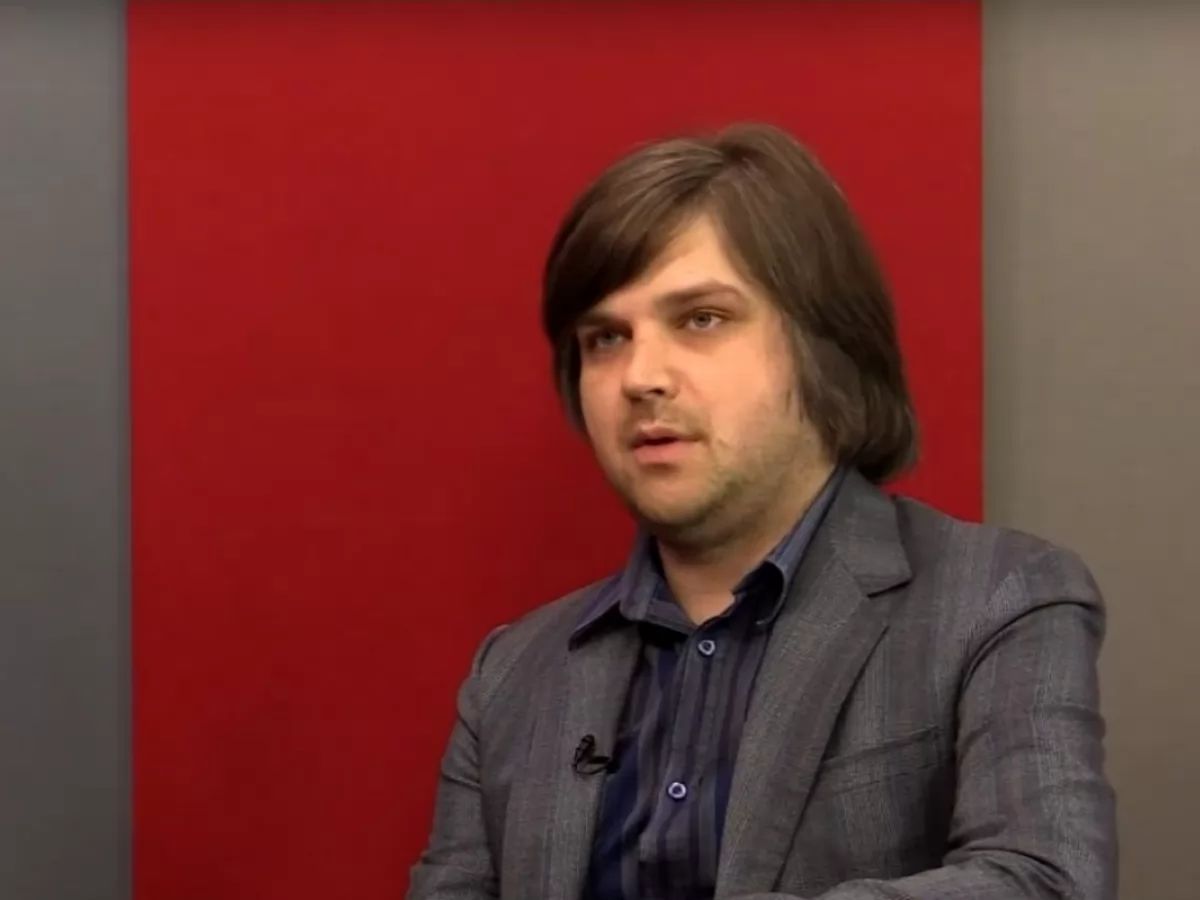 Since the beginning of the war in Ukraine, the representatives of the right wing and nationalism, including several well-known intellectuals, began to call for violence and even murder of those who publicly supported the Minsk Agreements, those who protested against “de-communisation” (the official policy of the Ukrainian state to erase any traces of communist ideology in the country) and the political settlement of the conflict in Donbass. The first targets of the attacks were left-wing groups.

Blacklists appeared. And some “left-wing activists” started to collaborate in making lists of those on the “wrong left”.

On March 3, in the city of Dnepr (former Dnepropetrovsk, from which the part “Petrovsk” was removed years ago as “Russian”, as it historically refers to the Tsar Peter the Great), the members of the SBU with the participation of the neo-Nazis of the paramilitary group “Azov” arrested the militant of the Ukrainian left-wing organisation “Livytsia”, Aleksandr Matiushenko. He was charged under article 437 of the Criminal Code of Ukraine with “participation in the aggressive war”. As the courts do not function in Ukraine at the moment, by decision of the prosecutor, he is detained for 30 days without trial. Details of the legal case are not known, because SBU only presents it to the lawyer. Most of the lawyers refuse to defend him, so as not to be accused of being “agents of the enemy” or ask for their services for US$3000, a very large sum for Ukraine today.

In Kiev, the arrests started even earlier. On 27 February, the brothers Mikhail and Aleksandr Kononovich, leaders of the Communist Youth of Ukraine, ethnically Belarusian, were arrested. Where they are and what they are accused of is unknown. All communication with them has been lost.

On 4 March, Vladimir Ivanov, a left-wing activist from the city of Zaporozhie, disappeared. His whereabouts remain unknown. His Telegram account contains posts that are clearly not his.

They arrest political opponents, representatives of the Church who have been fighting for peace all these years and anyone with critical opinions.

On 4 March in the city of Lutsk, SBU arrested Oleg Smetanin, violinist of the Volyñ regional philharmonic, accusing him of handing over to Russia information about the Lutsk airport.

On 7 March in Kiev, the well-known journalist Dmitry Dzhanguirov, a member of the “Novyi Sotcialism” (“New Socialism”) party, Vasily Volga, former leader of the Union of Left Forces, journalist Yury Dudkiny, writer Aleksandr Karevin, who wrote on his FB page: “The SBU has arrived”, were arrested. On Dzhanguirov’s FB page a video was posted, where he probably says things under torture that he would never say. Where they are and what they are accused of is not known. Where are the human rights defenders of the world, it is not known either.

On 9 March, near the town of Khmelnitsk, Oleg Pankartiev, assistant to a deputy of the opposition party “OPZZH (Opposition Platform for Life)”, was arrested. During the arrest he was brutally beaten and is still detained by SBU.

On 10 March in Kiev, Dmitry Skvortsov, a peace activist of the Ukrainian Orthodox Church, was arrested, he only managed to write on the internet that the SBU came for him. On the same day, in Kiev, 70-year-old poet Yan Taksiur, who had his programme on the youtube channel “Pervuy Kazatskuy”, dedicated to the political persecution of the Ukrainian Orthodox Church by the government, was arrested. Neither their whereabouts nor the accusations against them are known.

On 11 March in Kharkov, left-wing activist Spartak Golovachiov disappeared. The last thing he managed to write on social media was: “They are breaking down my door armed with Ukrainian uniforms. Goodbye.” Fighting continues in Kharkov, but most of the city remains under Ukrainian control.

Also on 11 March in Odessa, SBU detained Elena Viacheslavova, the daughter of Mikhail Viacheslavov, burned alive by the Nazis on 2 May 2014, in the Odessa House of Trade Unions.

The whereabouts of several members of the left-wing parties “Novyi Sotcialism” (“New Socialism”) and “Derzhava” (“Power”) are also unknown. They stopped answering calls and disappeared from the networks. It is possible that they are in hiding or are already in detention.

On 12 March SBU detained Elena Lysenko, the wife of Donetsk volunteer Andrey Lysenko. On 13 March she was released, but afterwards she was forced to record a video, where she had to slander her husband.

On 13 March in a village near Odessa, nationalist villagers burned down the house of Dmitry Lazarev, a left-wing activist.

On 15 March, SBU detained Artiom Khazan, a representative of the Shariy Party in the town of Alexandria of the Kirovograd region. During the arrest he was severely beaten. The next day, a video appeared on social networks, in which Khazan slandered the party chairman Anatoli Shariy. The current whereabouts of Artiom Khazan are unknown.

On 16 March, in the village of Tomashevka in the Kiev region, an armed commando kidnapped Guennady Batenko, a priest of the Ukrainian Orthodox Church, the next day he was released from the SBU.

On 19 March in the town of Krivoi Rog, the Ukrainian military entered the house and detained Yury Bobchenko, chairman of the trade union of Ukrainian steelworkers and miners of the Arcelor Mittal Krivoi Rog company, which belongs to a transnational group.

This information is still very incomplete. In the midst of the war and with the total power of many armed groups in the country, it is very difficult to collect information and registers of all the horror that is going on. We do not know whether there are dozens or even hundreds of detainees. But it is clear that with each new day of fighting, the repression against dissidents, pacifists and left-wing activists will continue to grow. The media show their usual complicit indifference. An urgent campaign of global solidarity is needed.

Despite the Ukrainian constitution, on 20 March President Volodymyr Zelensky banned all left-wing and opposition political parties, there are 11 of them:

The official reason for this ban: “contacts with the Russian Federation”. As if there was anyone in Ukraine without any contacts in Russia!

Today, as part of the war policy in Ukraine, officially banned Belarusian medicines. The Ukrainian government has been waging a war against the sick and pensioners for years now, and now it seems that they are finally about to win…

Also today the inhabitants of the Kiev region were forbidden to go to the forest without special permits. It is not clear whether this is to prevent them from fighting against the Russians on their own, or from forming new guerrilla groups with unpredictable political orientation, or from escaping from their homes under fire and/or compulsory conscription to go and fight for NATO interests.

Meanwhile, hundreds of videos appear on Ukrainian social networks, of how in different corners of the country, hungry and stressed people take out their anger and frustration on thieves or alleged thieves or would-be thieves, of both sexes, who are seen tied to poles and trees with their trousers down, and sticks at their side as tools for the willing executioners. Ukraine, which only a few weeks ago looked like a Colombia of Europe, now, with the war, quickly turns into a medieval Europe.