On April 27, 2022, an artwork and multimedia exhibition was opened for public viewing in central Seoul entitled “Peace in Ukraine”. 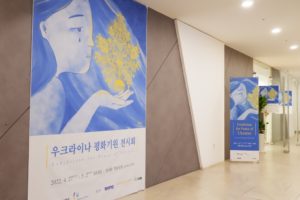 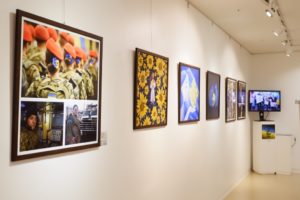 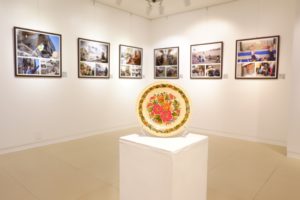 The exhibition was organized by Hankuk University’s Department of Ukrainian Studies and featured a number of photos, videos and posters about Ukraine and its fight for freedom. 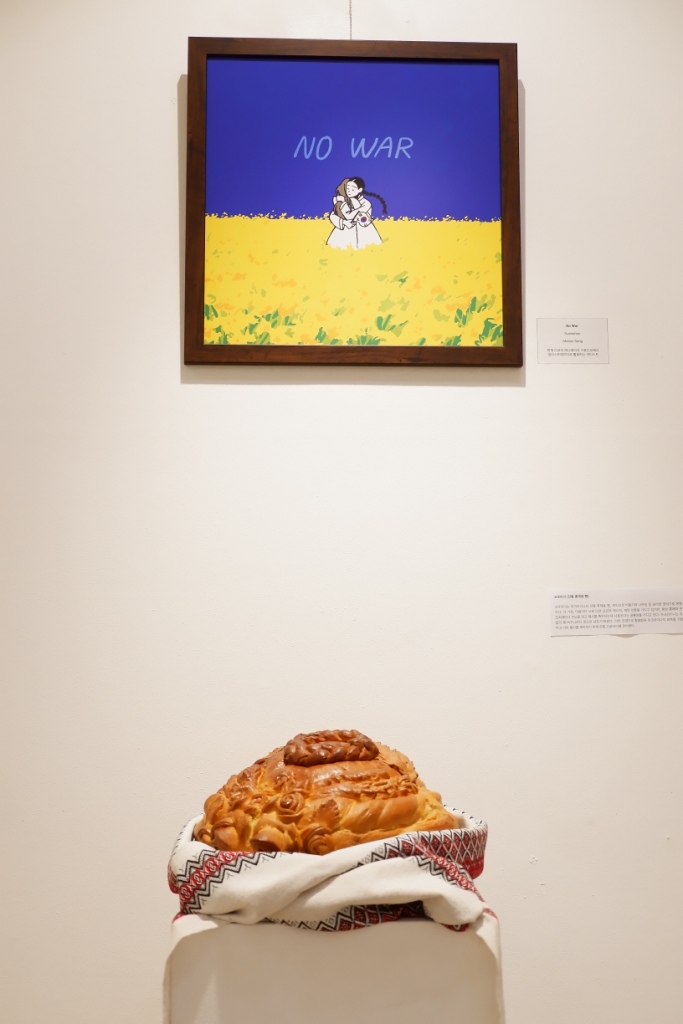 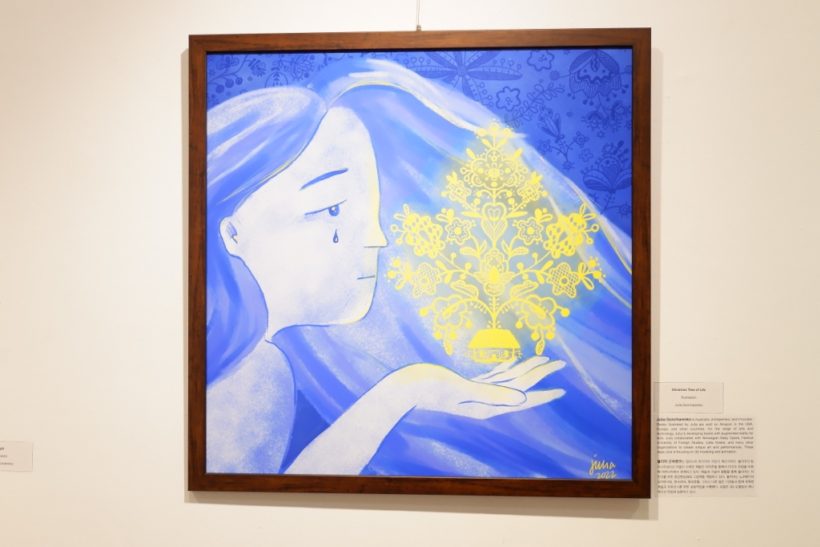 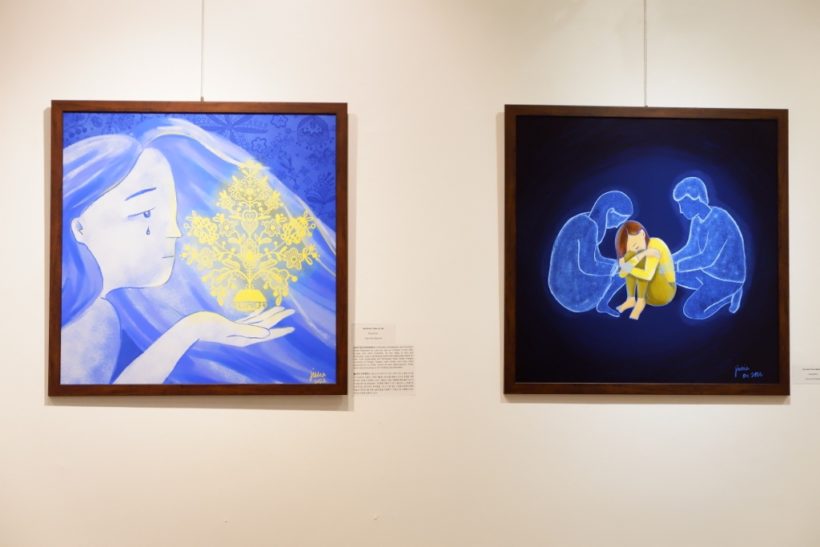 It also displays the artworks of Yulia Goncharenko, a Ukrainian illustrator residing in Korea. 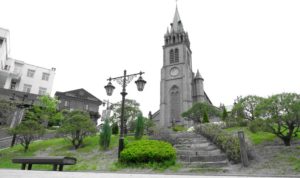 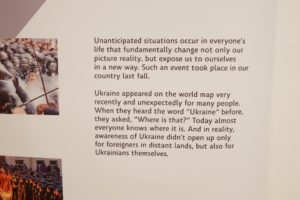 The exhibition has one section which displays some write-ups explaining the Ukrainians’ struggle for democracy and freedom from their own dictatorial regime in 2013-14 at Kyiv’s popular independent square called Maidan Nezalezhnosti. This actually was a brief reminder of the October 2015 documentary film, Winter on Fire: Ukraine’s Fight for Freedom, which we recently watched in a group and discussed in Korea. 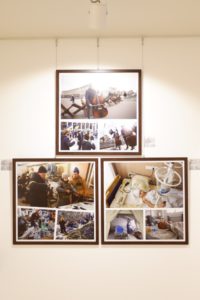 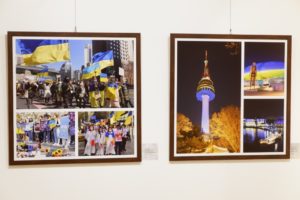 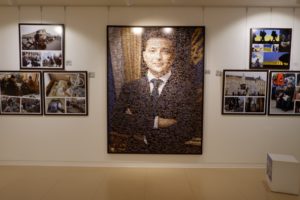 Here I would like to invite you to read some of the extracted reflections on the Ukrainian struggle and the protests at Maidan square as well.

“It is true. Today’s Europe is being created as it pushes aside two totalitarian regimes of the previous century, in two stages. The West’s scars are gradually healing from its recent collective suicide. The East has more recently survived its passionate struggle against Stalin’s communism…

Are we moving forward to a third stage, a third fresh breeze for Europe? Maybe. I don’t know. The main difference is that we have no charismatic hero leading the protest and serving as its symbol. Our epoch itself resists that, as information saturation annihilates distance. Prophecy needs distance and. And further- we are constantly shifting from one misfortune to another…” –Georges Nivat: French historian and honorary professor of Geneva University

The light of the Maidan…is the light of fear overcome. I’m not saying that our Russian media commentators are old men, but rather the only wisdom that they possess is the wisdom bred of fear. The victory over fear- what the Maidan is- is seen through the eyes of people who have not yet emancipated themselves of their fear. They do not see what there actually is; they only see the potential of what might come (and for them, of course, that future promises nothing good).

The light of the Maidan is also the light of rehabilitated humanity. (…) A huge square packed with inspired people singing the national anthem or saying the Lord’s Prayer together does not match the Russian understanding of what is “modern” and “contemporary”. Some Russians describe events like these in Ukraine as “archaic”. No wonder! What Russians see as “modern” is all too often nothing more than grotesque buffoonery. (…) indeed, moral agnosticism is another part, surprised that there is still a refusal to state unequivocally whether Stalinism was “good” or “bad”? (…) The people on the Maidan fight to make a clear difference between “Ukrainian” and “Soviet”. They are striving to finally leave the Soviet past behind. As recent events demonstrate, such attempts are still punished by Russia where a clear distinction between “Russian” and “Soviet” has yet to be made.” — Olga Sedakova, Russian poet and essayist 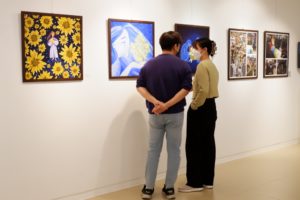 Unanticipated situations occur in everyone’s life that fundamentally changes not only our picture of reality but expose us to ourselves in a new way. Such an event took place in our country last fall. Ukraine appears on the world map very recently and unexpectedly for many people. When they heard the word “Ukraine” before, they asked, “Where is that?” Today almost everyone knows where it is. And in reality, awareness of Ukraine didn’t open up only for foreigners in distant lands, but also for Ukrainians themselves.