On the first weekend of November 2021, hundreds followed the “Call for Art” and demonstrated in Riace under the slogan “Abbracciamo Riace e Mimmo Lucano” (Let’s embrace Riace and Mimmo Lucano).

There was also a manifestation for Riace and Mimmo Lucano in Berlin on 6 November. 40 people made it clear: ” Welcoming refugees is an imperative of humanity and not a crime!”

The mountain village of Riace in Calabria in southern Italy has welcomed refugees in solidarity since the late 1990s. Locals and migrants found paid work in small workshops and stores. The village, which was affected by migration, was revitalised and given a perspective for the future. For two years now, the village has been producing its own olive oil again. 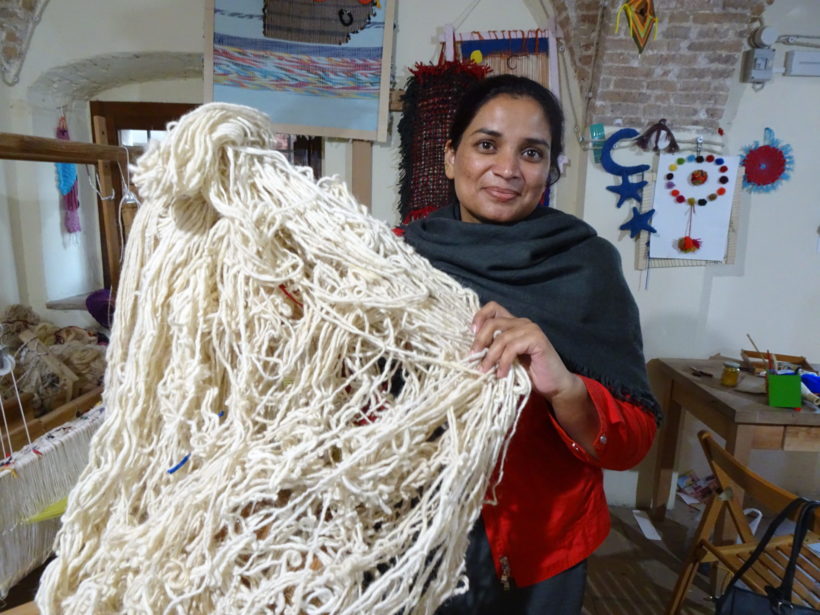 Riace and its former mayor Domenico (Mimmo) Lucano became known worldwide for the “Riace model”. This included the strict rejection of the mafia, which is very strong in Calabria. In 2018, increased repression set in. Mimmo and 26 fellow activists were charged with promoting illegal entry.At the end of October this year, Mimmo Lucano was sentenced to 13 years and 2 months in prison. Convicted for his solidarity and convicted for putting the people seeking protection before the bureaucracy. He took in all those who came to Riace – and were often sent by official bodies. With the public funds – of which he is now accused of embezzling – he provided for more people than intended. He supported the refugees wherever he could. 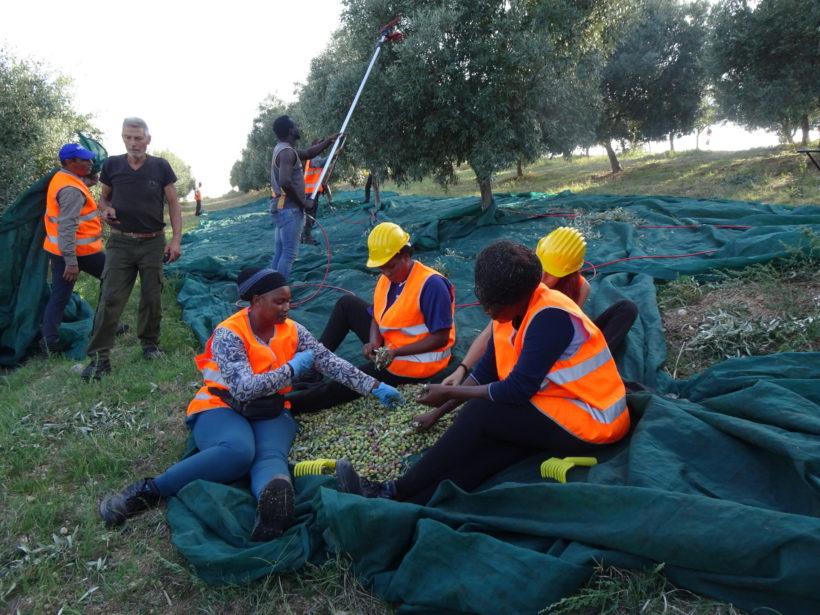 On 6 November, we also embraced Riace and Mimmo Lucano from Berlin. At Oranienplatz in Kreuzberg, with its history of self-organisation of refugees, we gathered at the memorial for the victims of racism and police violence to send a signal of solidarity:

“Riace is an example of a welcoming culture where every person counts as a human being and no one is left behind. The ‘Riace model’ and Domenico (Mimmo) Lucano have given hope to many people, for which Mimmo and his fellow activists deserve recognition and support.” 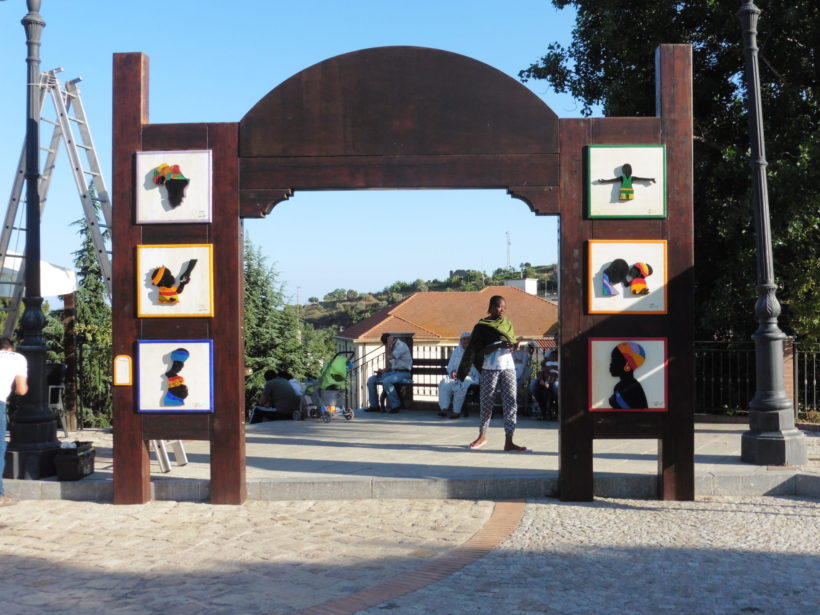 The sentence against Mimmo and his comrades is a disgrace

The deputy chair of NaturFreunde Germany, Uwe Hiksch, called the verdict against Lucano a disgrace. Domenico Lucano had shown what human rights and humanitarian work for refugees should look like. He should not be condemned for this. The German government should call on Italy to withdraw the obviously political sentence. 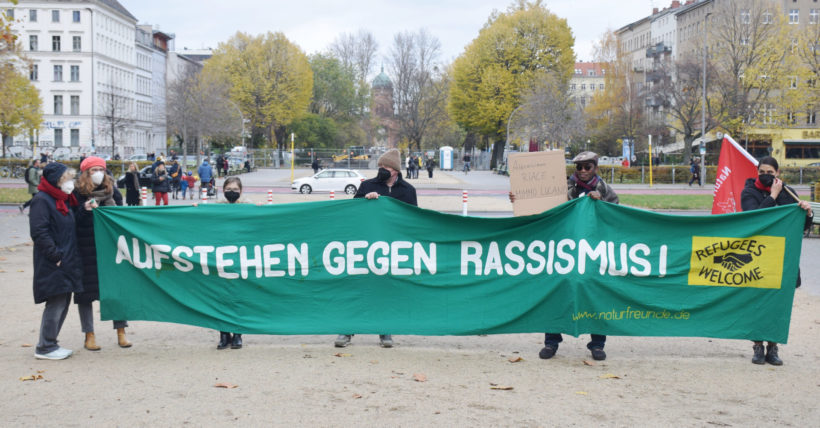 The sentence against the former mayor is part of the continuity of inhumane policies against refugees in the EU. It is completely unacceptable that people have to die almost daily on the various escape routes. Those who see the completely debilitated people at Poland’s external border should take to the streets and demonstrate for a humanitarian refugee policy of the EU.

Hiksch stressed that Germany’s restrictive policy of closure against refugees was largely responsible for the inhumane refugee policy in the Mediterranean or at the EU’s external borders, and called on all municipalities in Germany to actively support the campaign “Create safe havens for refugees”. He expects the new red-green-red senate to end deportations from Berlin.

Bruno Watara from the Berlin group “Réenchanter l’Afrique” spoke about his experience during a visit: 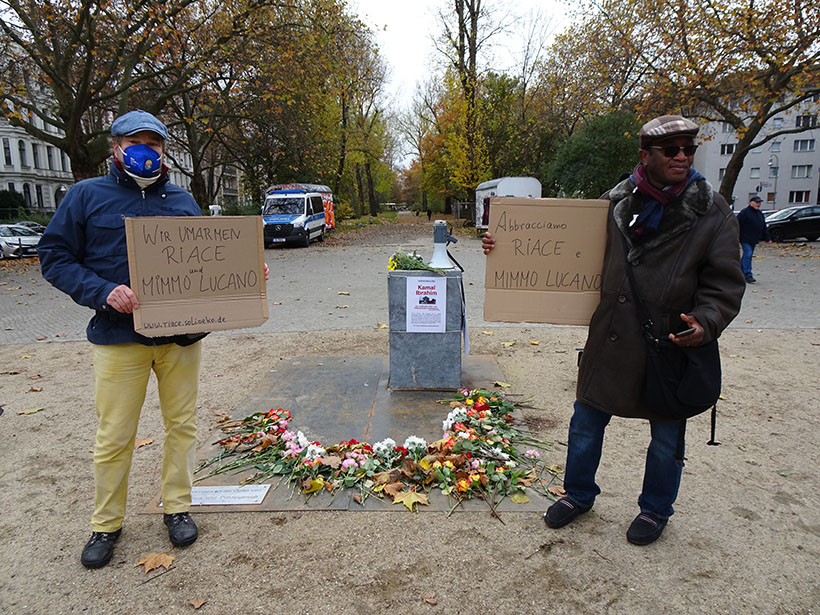 The asylum system in Germany puts us in pigeonholes: Those entitled to asylum, those recognised under the Geneva Refugee Convention, those with subsidiary protection, tolerated persons and those ‘obliged to leave the country’…. Each pigeonhole is associated with certain rights or restrictions of rights.”

Germany cooperates with many dictatorships in the fight against migration, and the EU also works with torture states in so-called “border protection projects”. Therefore, there can be no fair asylum procedures in Germany.

Watara himself lived in a refugee camp in Mecklenburg-Vorpommern for nine years after he had to flee from West Africa. Now he stands up for those who have to spend many years in such facilities, often 10, some almost 20 years. During this time they are not allowed to do anything, they are not allowed to work, they cannot send money home. “They lose contact with their relatives, and when they are allowed to live outside after such a long time, they often can’t do it anymore and despair,” Bruno Watara accused Germany’s inhumane refugee policy. 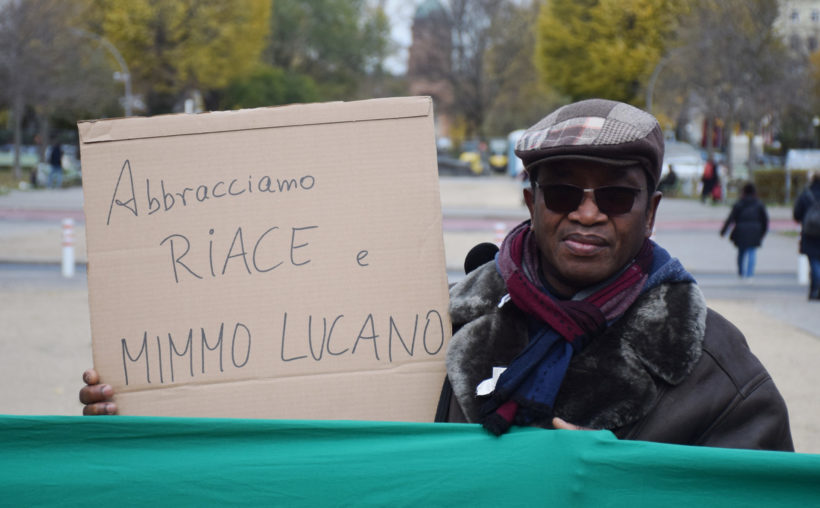 Standing up for the rights of refugees everywhere

“On a regular basis, Berlin’s Foreigners Authority deports refugees unlawfully at night time, although this would only be allowed in absolutely exceptional cases,” criticises Nora Brezger from the Berlin Refugee Council.

The entry into the flat of the deportee without a search warrant is also unlawful, as is the regular taking of mobile phones by the Berlin police and the targeted denial of access to legal protection. 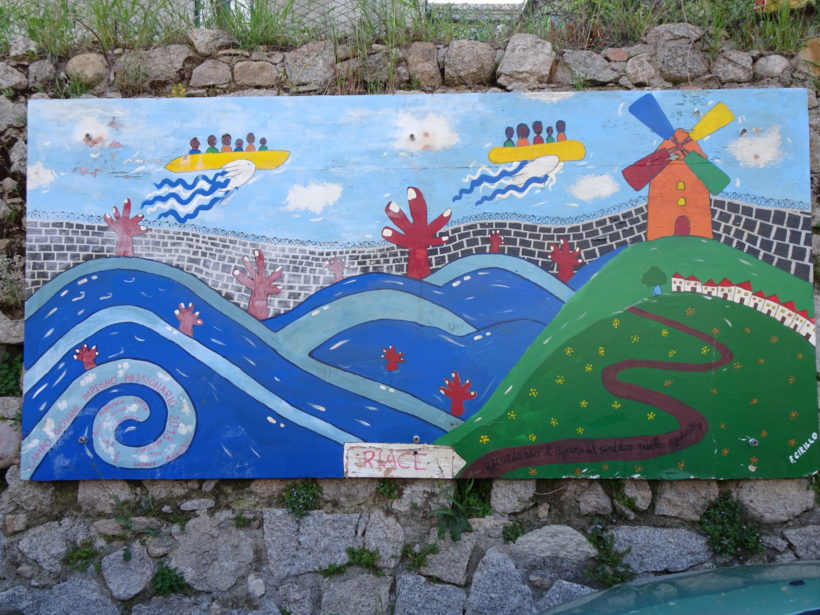 “Instead of focusing on expanding the existing right to stay regulations and offering tolerated people a perspective, Berlin also relies on deterrence and deportation in many cases,” she states. Even deportations of people with disabilities or mental illness are not uncommon. Brezger demands: “Berlin must finally implement the paradigm shift already promised in the last coalition agreement, away from deportations and towards the right to stay.” 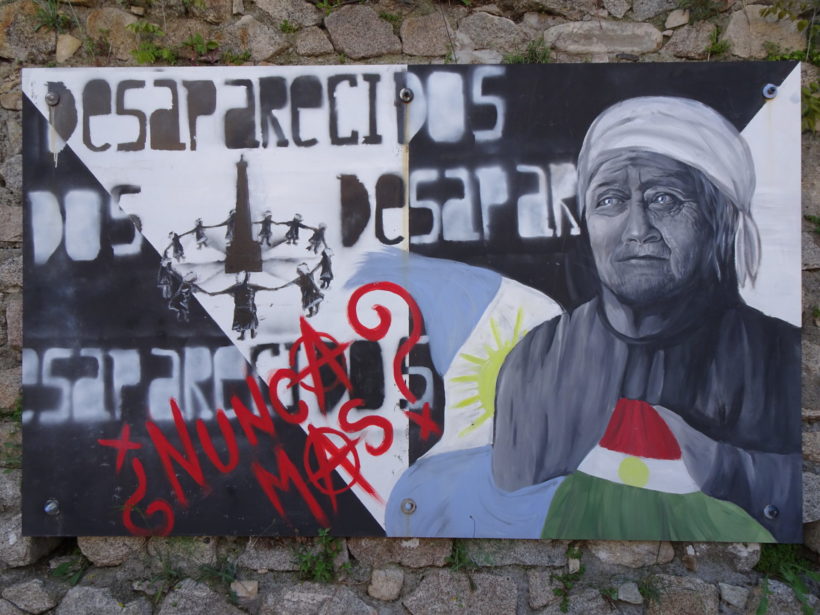 The organisers of the manifestation on 6 November stressed:

“Solidarity with Riace also means standing up for the rights of all refugees everywhere. For those who are still on the move and for those who have managed to arrive in a safe place. The deadly borders of Fortress Europe prevent this far too often. They are Europe’s dead, dying of thirst in the Sahara, drowning in the Mediterranean, killed on the Balkan route or currently at the Polish border.” Too often, Berlin is not a safe place for those seeking protection.“ 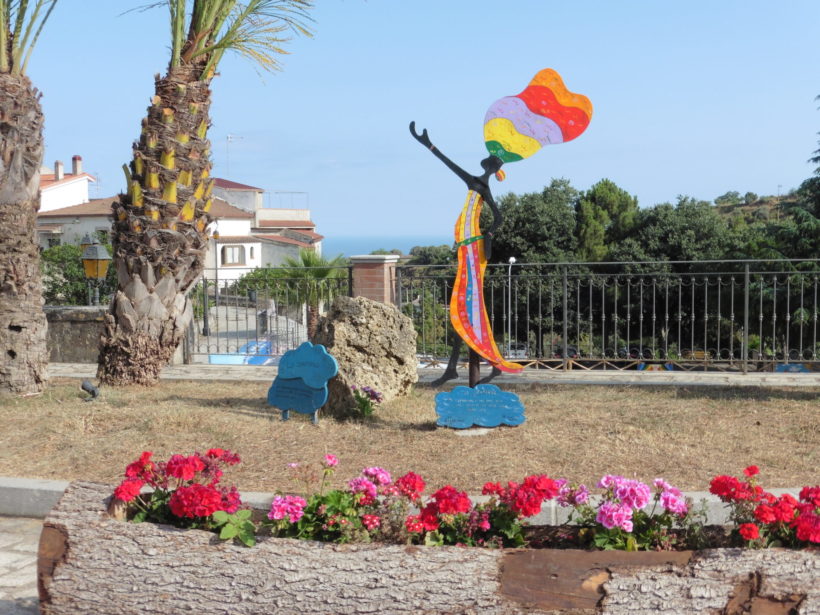 Domenico Lucano also had his say at Oranienplatz. Some passages from his book “Das Dorf des Willkommens” (The Village of Welcome – title of the Italian edition:

“Il fuorilegge. La lunga battaglia di un uomo solo”) were read aloud. And so this article shall also end with his words: “Whenever I stood on the beach, my feet in the water, looking out to sea, I had one certainty: whoever knocks on our door, whether it is a miserable one, a refugee or a traveller, he means the only salvation for the whole world, the only hope against the violence of history.” 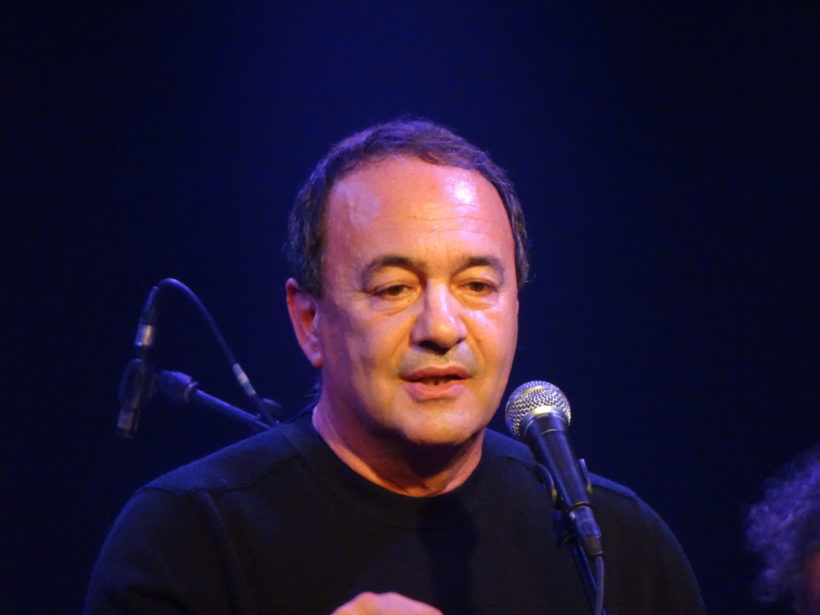 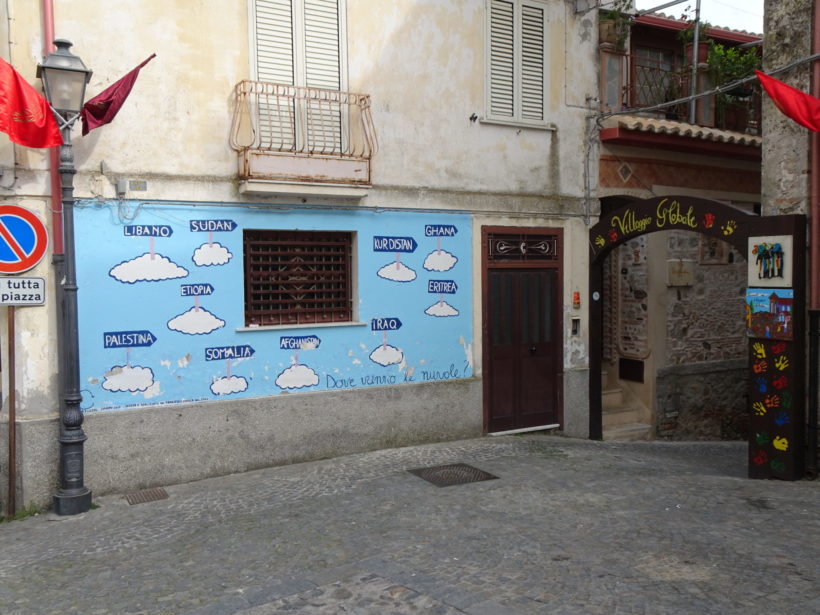 Shortened version of an article about Riace that will appear in the Berlin environmental newspaper “Der Rabe Ralf” in December 2021. 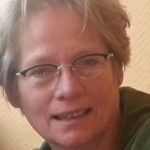