The Call to Dialogue: The Church Response

Thank you for reading the first part of this series. In case you missed the previous article, here is the link: https://www.pressenza.com/2021/12/human-fraternity-and-interreligious-dialogue-seeing-god-in-the-other-1-4/. The second day unfolded with a prayer led by the 4th year students from the Asian International Formation Community followed by the welcome message of Dr. Genevieve Balance-Kupang. Bro. Ferdinand Marcos, CICM delivered the Day One recap. 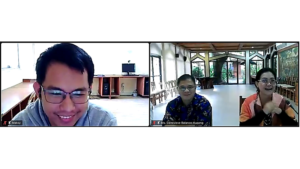 Bro. Ferdinand Marcos (L) was all smiles when he was affirmed by the facilitator Genevieve Balance-Kupang for his comprehensive recap on Awakening the Self to an Awareness of the ‘Other’ and the Need for Dialogue. Photo credit: Rei Florentino Conde

Fr. Castillo explained the context of missio ad gentes for the evangelization of China as related to the founding of the CICM Congregation by Théophile Verbist who went to China in 1865 and died there in 1868. The Congregation adopted the missiological renewal of Vatican II, and in the 1974 General Chapter it came up with two priorities: for non-Christians and for the poor. The book “Witnessing to the God of Love and Mercy” narrates the deepening of its mission with the non-Christians.

Highlighted were: 1) the meaning of evangelization and its newness, referring to the apostolic exhortation of Pope Paul VI, (Evangelii Nuntiandi, 18), bringing Christ’s Gospel to all, transforming it from within. 2) IRD as constitutive activity of the Church’s evangelizing mission (Redemptoris Missio, 56). And 3) IRD and its invaluable contribution to New Evangelization (NE).

He described the three situations where Christians can bring the Gospel: where the Gospel is not yet known (this implies first evangelization); to the young churches (which need pastoral care), and to “post-Christians” (those who lost the sense of being Christian and who need a re-evangelization).

Fr. Castillo emphasized that IRD helps us deepen our faith, strengthen it, and impel us to reach out. It assists various believers to deepen religious commitment, live together in peace, harmony, and work together in the service of humankind. He quoted the Vietnamese-American theologian Peter Phan to explain the triple dialogue as espoused by FABC (Churches in Asia): with the poor, with cultures, and with religions. He summed up by saying that we need to have a sense of rootedness (in our religion), openness to learning from others, mutual correction, enrichment, and purification.

Brigitte Awisan (R) listening to the response of the organizers during the Q & A. Credit: Rei Florentino Conde

Fr. John Mallare, a member of the CICM General Committee on Mission, and Conference Co-chair presenting one of his slides on the topic the “Church Magisterium on Interreligious Dialogue.”

Fr. Mallare discussed Nostra Aetate, Dialogue and Proclamation (DP), Lumen Gentium (LG), Evangelii Gaudium (EG), and Fratelli Tutti which are the foundation of IRD. Christians engage in constructive relations with people of other faiths without losing sight of their duty to evangelize/re-evangelize and maintain good fellowship among the nations.

Reject nothing of what is true and holy in other religions because there is something spiritual in the customs of people (LG). In Ad Gentes, the church recognizes the presence of seeds of the word, and points to the riches which a generous God has distributed among the nations. He reiterated the four forms of Dialogue and said they are not competing to each other, but they are lived and valued according to the context in which they must be used.

Fr. Mallare discussed the obstacles to dialogue which we will present in the upcoming fourth series. He concluded by saying that those engaged in Dialogue must be trained solidly, joyfully grounded in their own identity, and acknowledge the values of others (EG). He talked about Fratelli Tutti, showing Pope Francis who invites people to build a world of peace, truth, justice, and mercy… Religions must never incite war, hateful attitudes, hostility, and extremism, nor must they incite violence or blood-shedding.

The morning session concluded with a prayer for healing by the Cordillera women and youth chanters. 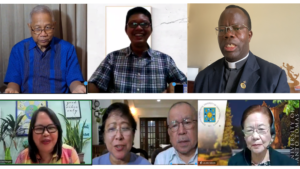 Meeting for the first time Muslims smiling and welcoming him, Fr. Amigleo changed his prejudice into appreciation and love. Their way of praying impressed him. He helped facilitate IRD with Muslims, Novices’ immersion in the Muslim families, IRD program among Muslims, Buddhists, and Hindu students, Educational Forum among Religious leaders to reflect about peace, and dialogue with refugees from Iran and Afghanistan.

He learned the language, history, customs, and culture from the people; he transformed his biases into a positive attitude and prayed with them. He visited Muslims families and was accepted by them. He learned not to show signs of superiority or tendency to teach them. He lived the dialogue of life and learned not to start a conversation about religion unless it was asked. Having been a missionary for more than four decades in the wonderful country of Indonesia, Fr. Amigleo expressed his feeling of happiness being with Muslims, having enjoyed living among these beautiful people surrounded by their enchanting natural landscapes.

Fr. Garcia showed Senegal’s geographical and anthropological situation. The northeast part of Africa, it is a Muslim-dominated country (94%-Muslims, 5%-Christians, and 1%-others). He related his experiences with his Muslim student and his friend whom he discovered were also practicing religious tolerance and respect. It is important to communicate very well with them, he said. He also pointed out the vital aspect of letting them understand his identity as a priest. Despite religious and cultural differences, he realized that it is possible to co-exist with others without hurting each other. Practicing the dialogue of life, it was heartening to listen to his narrative where the Muslims in his community were involved in building a Catholic Church. His personal experiences of relating with the majority of Muslims in Senegal helped him to deepen his faith.

The highlights of Fr. Shono’s involvement in dialogue were the following: 1) the creation of group gatherings where experts organized conferences on various themes for both Muslims and Christians; 2) participated in prayers called by the local authorities, experienced Muslims joining the Eucharistic Celebration, and Catholics meeting Muslims during Ramadan; 3) the construction of structures for dialogue and development: a Cultural Center-Friendship House for both Muslims and Christians, the Theophile Verbist School, and the Centre of Advancement of Women; 4) good neighborly relations and joyful participation in the Muslims/Christians’ feasts. 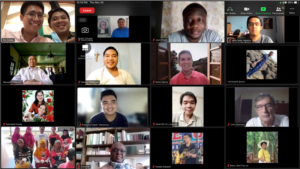 Steeped with the values she got from the Jesuit school, she committed to work in Interreligious Dialogue. Ms. Pangan shared 1) the IRD adventure in her school, the witnessing, conviction, and the taking of risks in areas where IRD is most needed. She dared to lead, made a difference, and became a woman for others. 2) She dedicated herself to creating safe spaces for dialogue and peace, approaching other people, cultures, and religions. 3) She posited that trekking the path to peace is a hundred-year project. Peace needs restoration of relationships with mutual trust, respect, caring, and the prevention of violent extremism.

Their motto is love. Love for one another, love that implies suffering, trust, respect, communitarian spirituality, fruitful dialogue, and the discovery of peace and harmony. Love is necessary when it comes to IRD. We are love, just as God is love. And through dialogue, we learn to show love to others, to see Jesus in everyone, to love without distinction, to be the first to love and to make ourselves one with others. In this sense, dialogue becomes a golden rule: do not do to others what you don’t want others do to you; treat others well. The good tools for dialogue can be found in the art of loving. Jesus suffered because he loved us; therefore, when we love, let us be ready to lose, to become nothing (as Mary did), and to have faith in God’s love.

Dr. Sison highlighted IRD as a Dialogue of Common Actions. We all have the conviction that we belong to one human family, gifted with a sense of spirituality, and shared responsibility for the common good. To achieve these common actions, we let ourselves be guided by an ethic of principled engagement, inclusiveness, and the obligation to stand on the side of those denied rights, the poor and the oppressed. The obligation for interfaith leadership is to break down prejudices and intolerance, to educate and to take action to address existential threats to humanity, organize non-violent actions against social injustices, foster collaboration between faith communities, advocacy groups, and train and build our capacity to dialogue. 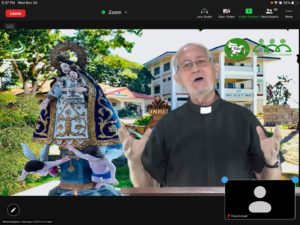 Fr. D’Ambra presenting his topic “The call to dialogue and the church response.” Behind him is the newly built Emmaus College of Theology major in Interreligious Dialogue, the first of its kind in the Philippines.

Fr. D’Ambra’s involvement on IRD started right after his 1966 ordination. Sent to Mindanao, Fr. D’Ambra lived with the refugees and those stereotyped to be violent people. He experienced the Muslims’ kindness and became his friends. They sought his help to end violence in their place. He founded the Silsilah Dialogue Movement (SDM) promoting a life-in dialogue for Muslims, Christians, and people of other faiths with respect, trust, and love for one another.

His superiors recalled him to Italy to stop the threats to his life. He then studied at the Pontifical Institute for Arabic and Islamic Studies to deepen his knowledge of IRD. His studies yielded fruits like the Emmaus Dialogue Movement, a lay movement promoting the Emmaus spiritual journey as a vocation, guided by Jesus’ Beatitudes.

The SDM’s latest contribution to dialogue is the Emmaus College of Theology major in IRD. Committed to facing the new challenge of a synodal church as initiated by Pope Francis, it forms young people to serve the Church and society as a human fraternity, living the Culture of Dialogue as a Path to Peace. Dialogue starts from God and brings people back to God. He explained the significance of the Episcopal Commission on Interreligious Dialogue, committed to promoting dialogue with followers of other religions. IRD is an important task of the church, and SDM is accompanying the church in this mission to promote a culture of dialogue and a vision of peace.

SANI NDZENGI Romeo, CICM, is a second-year theology student at the Maryhill School of Theology. He is from Congo and is a member of CICM-AIFC.

Genevieve Balance Kupang is lay associate of the Episcopal Commission on Interreligious Dialogue of the CBCP; the chair of the Special Interest Groups of the World Council for Curriculum and Instruction; a researcher, resource person, consultant, author, and has a career in the academe and NGOs.