The play ‘An Echo in the Desert’ was presented in a single performance. Together with a listening process and a multimedia product, it is part of the results of the social dialogue process carried out by the Commission with the National Victims’ Table.

The play ‘An Echo in the Desert’, which is part of the legacy of the Truth Commission, is a dramaturgical proposal made in collaboration with the National Arts Company, under the direction of Nelson Celis and a cast made up of young victims of the conflict, five of them from Cundinamarca, Antioquia, Arauca, Atlántico, Cauca and three more who are in Spain, Costa Rica and Argentina. The script was written by Alejandro Gómez based on the testimonial accounts of the young people who shared their own stories and those of their families and were part of the cast.

The play was presented as one of the results of the social dialogue process carried out by the Truth Commission with the National Roundtable of Victims. The play is based on the idea of responding to the metaphor of whether we can regenerate ourselves as other species do in order to heal, and addresses the generational memories that the armed conflict has imposed on the life stories of young people. It overlaps the inherited pain, fear and anger with their own experiences and the uncertainty of the future.

In order to transmit these stories and echo the experiences of some families, which become the story of many Colombian families, a cast made up of young people belonging to the Mesa Nacional del Víctimas and in exile was used. Liliana Martínez, Cristian Pedroza, Lilibeth Ciro, Joao Meneses, Ana María Rodríguez, Karen Lisbeth Nieto, Laura Marcela Borrero, Jade Sofía Arteaga and Dera Mariam Arteaga, who were in charge of amplifying an echo that reverberates from that desert, which sometimes seems like the territories after having suffered the harshness of the armed conflict.

The director Nelson Celis explained the complexity of a montage that advanced from the virtual for more than three months and materialised in just six days in person: “It was an intense, strange and unusual process. The text was written by a playwright, for the young people, it was to take their own texts and read them in other words, that implies additional work in addition to the acting training, it is to confront the word. When we met it was as if we had known each other for a long time. Today we are here and they have taken it on as professionals, it’s knowing that they have a body and a voice with which they can express so many things that they didn’t know before. 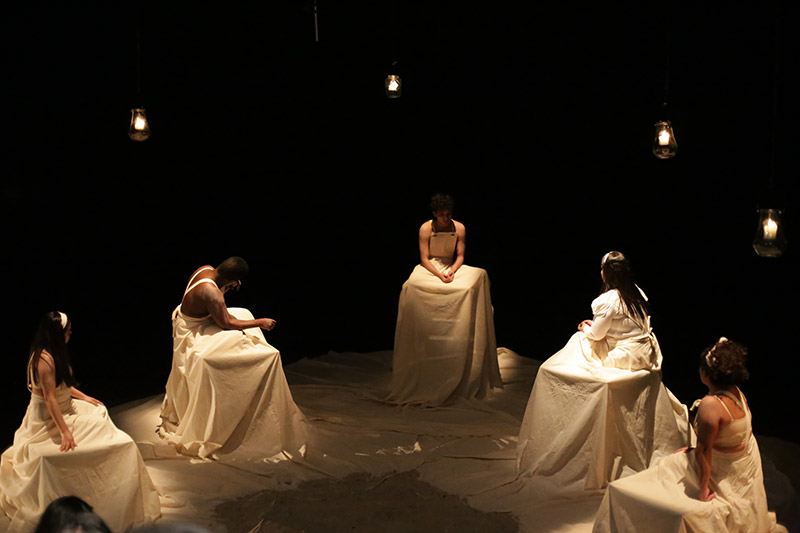 The art and this staging allowed the conclusions of many stories and the balance of the relationship with the MRV to materialise in the most heartfelt and best expressed way. “After fifteen years I am back in Colombia. I didn’t feel like I belonged there, but coming here, it’s strange, because I don’t feel like I belong here either. The people, the culture, the city, my land, it’s like going back to my roots and knowing where I come from,” said Joao Meneses Pacheco, an actor in the play, who has lived in Spain since he was five years old.

Listening to the victims is often the first step to healing. In the case of Cristian David Pedroza Perea, sharing his story brought him to the stage: “At the beginning I was too scared, but my mother, Jhon Jairo Romero, the teachers gave me a lot of support and it has been wonderful. The fact of sharing with people who went through the same thing as you, is to feel supported, to feel that you are not alone and that makes you see life differently, to want to continue living, to continue with everything and to think that despite the bad things there are too many good things. I feel proud of myself, because I am doing something good for me and for everyone else, for everyone who has been part of this process.

Since 2019, the Truth Commission has been working with the National Roundtable for Effective Participation of Victims (MNV), which is a direct interlocutor regarding the development and implementation of public policies for victims. In 2021, eight private listening sessions were held with representatives of the departmental roundtables of victims from 31 departments, in order to learn about the impacts, coping mechanisms and persistence factors of the armed conflict.

Likewise, on 5 November, a balance of this process was carried out with allied state and international cooperation entities, where the results of the listening process, a multimedia special and the theatre play were socialised. Also, between April and July 2021, different private listening spaces were held, focusing on the impacts experienced in the context of the armed conflict, the different experiences, coping mechanisms and forms of resistance and recommendations for non-repetition.

In the national dialogue held in September, the results of the listening process with leaders of the national roundtables for the effective participation of victims were presented. It was a space that invited participants and observers to reflect on the role of victims of the armed conflict in our society. They shared the impacts that this situation has had on their lives and communities, as well as the forms of association that they have created thanks to the law and, in particular, to the tenacity of those who have decided to step forward and assume leadership on behalf of the almost ten million victims registered in Colombia today.

In relation to the factors that have an impact on the continuity of the armed conflict and violent dynamics in the territories, the discussions highlighted factors such as: the differentiated presence of the state, where in some regions there are absences and in others they denounce abuses of power; the simultaneous existence of democratic mechanisms and violent forms of repression that make the armed conflict worsen and show its worst face; racism and ethnic and racial discrimination; drug trafficking, and other illegal economic dynamics that stand out within the territories.

From the Truth Commission, the director for Social Dialogue, Gerson Arias, ratified the institution’s commitment to the objectives of its mandate and was also positive about the satisfactory balance in relation to the relationship process achieved with the MRV. A favourable result that was supported by Orlando Burgos García, coordinator of the MRV: “To analyse why the Truth Commission was born after the agreements is to begin to see a path that is not easy to walk, especially in a country with the situation of ours, where talking about the truth generates so many inconveniences. Today, after this journey with the Commission, we feel satisfied with the relationship, the articulation and the respect for leaders that we received from the Commission, which allowed this scenario to take place”.

Among the main ways of resisting, learning and community stand out. Exercising leadership and helping others has allowed them to heal, as well as to share their story with others and find empathy in the listener. The previous work in the private spaces allowed a diversity of voices to be heard, including indigenous, Afro, Roma, LGBTI+ leaders, leaders of people with disabilities, older adults, youth and ex-combatants. This process allows the Commission to broaden the resonance of the stories and testimonies it has heard so far.

Finally, the multimedia project that will be presented below seeks to give an account of the impacts, the resistance, and especially the life stories and coping of the victims who are working to ensure that what they have experienced is not repeated. This multimedia special is divided into three chapters: 1) Listening to heal, 2) Resisting to continue, and 3) For peace, not to repeat. Each section is a valuable resource that society should know, share and seek to understand from the perspective of the victims. The product allows for a valuable and necessary construction of memory that involves us as a country and undoubtedly contributes in part to healing the wounds of a past that no one wants to see repeated.

In the chapters related to the recommendations for non-repetition, the work focuses on the role, relationships and impact that the victims’ roundtables have in the territories. The multimedia component is based on the life stories of those who, despite the strong threats to social leadership in Colombia, continue to resist and have decided to work for the vindication of their rights. These are the life stories of people who became leaders when violence touched them. Today, despite the persistence of violent dynamics in their territory, they stand firm with their example, tenaciously teaching others that it is possible to move forward.

Much of the work achieved with the Mesa Nacional de Víctimas was possible thanks to the support of the representatives of the different departments, to the courageous people who shared their testimony, to the commitment of a great work team and to people like Jhon Jairo Romero, representative of the victims in exile, who was at the forefront of many of the particular processes and who made possible the satisfactory delivery of the results.

The agreement reached between the MNV and the Commission is victim-centred and is key to the legacy of the Commission; it is vital to create a narrative that is recognised by society at large and that contributes to the construction of memory and country. Putting the victims at the centre and amplifying their stories through broad and plural listening makes social, civil and institutional actors ratify their commitment to the task of making history visible and enabling recommendations for non-repetition.

The Victims Unit and the National Centre for Historical Memory (CNMH) expressly joined forces to close this process. Both institutions ratified their commitment to the victims and especially to the preservation and construction of memory. Finally, they showed their interest and reaffirmed the responsibility they will have to face the challenge of social sustainability that remains once the Commission completes its mandate.