It’s now officially presidential election season in the Philippines with the filing of the certificate of candidacy done October 1-8, candidate substitution allowed till November 15, and nationwide voting on May 9, 2022 (the second Monday of May, every six years). Despite the constraint posed by Covid-19, restraint is not the tone and mood of the day; many Filipinos feel it can even get more catty to virulent. The clues are clear from the months of jockeying for party nominations, the party shopping and muddling by aspirants, the surfacing of candidates from a wide spectrum (from qualified to pretenders to outright nuisances), the unification attempts of forces for and against the administration, the tandem (vice president) and senate slate selection, the plotting of presidential substitutions before deadline.

An irony it is that 35 years after the EDSA People Power revolution in 1986 that toppled the 14-year martial law regime of the dictator Ferdinand Marcos, the gut issue now is what drove the Filipino people to that historic milestone: Democracy versus Authoritarianism. No surprise that it is, though. Two personalities have all the reason and might to make it slide through. 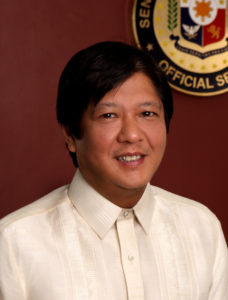 Dictator’s son Bongbong Marcos, 64, who lost in the vice-presidential race in 2016 and in his two vote-recount petitions at the Supreme Court, and earlier hardly made a squeak as senator, shreds off the last ounce of delicadeza by gunning this time for the top post. More determined to clean up the Marcos name, make a hero out of a despot, and for family to return to Malacanang from where they were driven into exile in Hawaii that February 1986. Historical revisionism is his brazen tactic to woo most especially the biggest voting group, the youth, who are factually and emotionally distanced from the oppressive years of martial law. 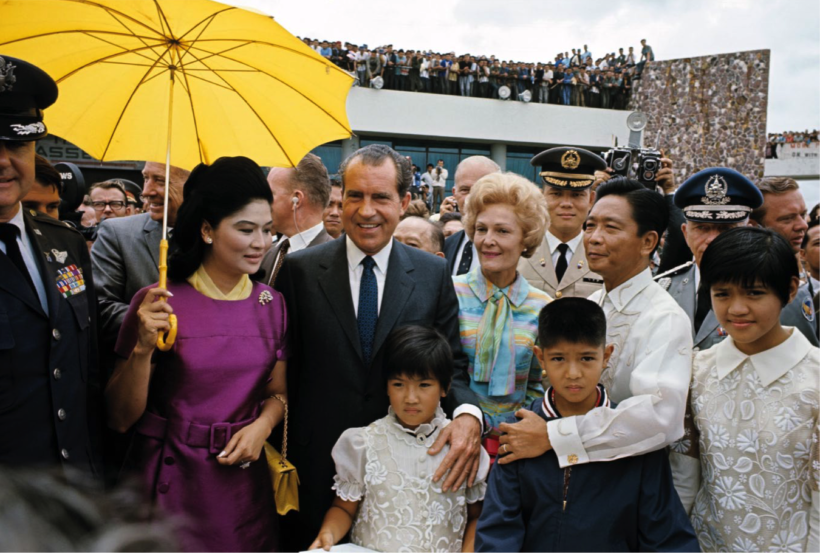 Richard and Pat Nixon (center) at the Manila International Airport with Imelda and Ferdinand Marcos and their children Irene, Bongbong, and Imee. Wikimedia Commons

Many say, it’s pressure from mother Imelda, now 92 and not anywhere departing from looted jewelries and delusions of grandeur. Likewise, there’s still a bulging treasure chest that Bongbong can scoop from to buy an election before it is forced back to the government coffers and divided among thousands of ML victims. 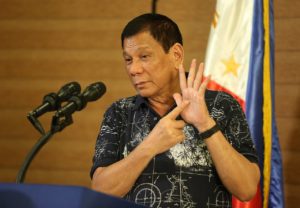 President Rodrigo Roa Duterte, 76 never hid his admiration and emulation of President Marcos that he picked up his authoritarian leadership style, first as mayor in his native Davao province in Mindanao for over 22 years, and since 2016 the nation’s president on the way to term completion in June.

In his Oct. 8 article in Rappler (digital media company founded by Maria Ressa, distinctly honored with the Nobel Peace Prize for journalism last Friday), veteran and esteemed journalist Vergel O. Santos calls Duterte, “the overarching issue (in this election). “He is repression, he is militarization, he is terrorism. He is EJK (Extra-Judicial Killing). He is corruption. He is China. He is the pandemic.” 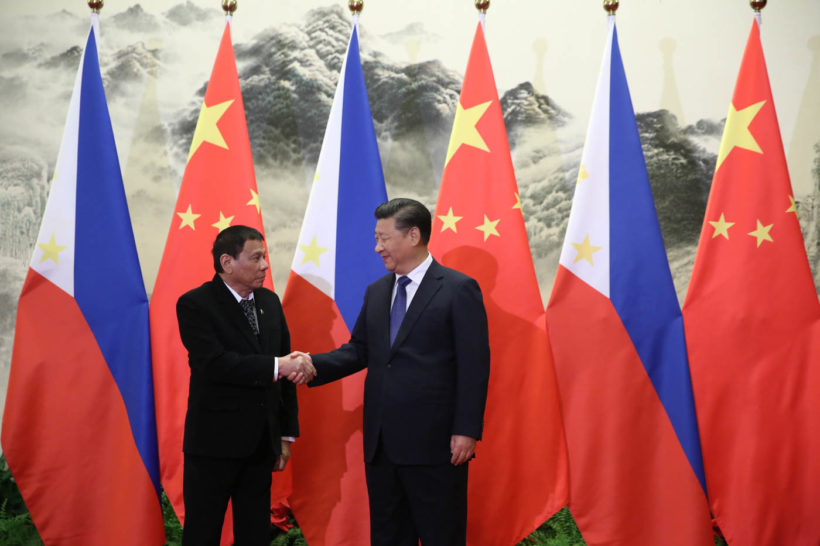 President Rodrigo Roa Duterte and People’s Republic of China President Xi Jinping shake hands prior to their bilateral meetings at the Great Hall of the People in Beijing on October 20. Photo by King Rodriguez/PPD. Wikimedia Commons

With the accountability sword on his head, mainly through the International Criminal Court investigation on his EJKs, the Commission on Audit red-flagging of the Health department’s Covid fund spending, and the ongoing Senate hearings on what could be plunder during the pandemic (plundemic), the president declared (yet, later withdrew) an unprecedented vice presidential run tandem-ed with his faithful executive assistant now newbie senator, no doubt his backdoor return to power and its immunity blanket.

Also in the election ring are Duterte “enablers” (no matter how they disavow that, and belatedly, the evidence is too glaring to eschew outright). It is then perceived as the joining of Admin forces to save the president from the chasing institutions and soften on the dictator’s son. No matter how belied, the shadows of two tyrants loom large.

What chances are there for democracy, and the moral/legal/structural order it embraces, to stay? 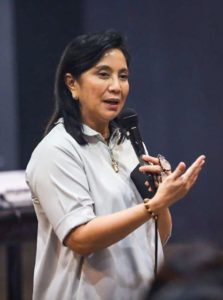 The Opposition anchors its hope on a single candidate, the genuine one in the top roster of six (as 97 have filed COCs), the only rose among the thorns, to cite a familiar phrase: Vice President Leni Robredo, 56, lawyer-economist.

She has been consistent in her espousal of democratic principles like truth, justice, freedom of expression, non-violence, people over personal interests, and patriotism. Calm, decent, focused and clear in her speeches, she has been contrasted to the president who habitually hurls foul and disparaging invectives and insults on his critics especially in his rambling and giddying Monday late-night talk to the people on TV. Yet, she is emphatic in her criticisms and uncompromising in her democratic stance. Which make her the favorite shooting target of a huge army of smut-talking trolls in social media, suspected to be funded separately by both the administration and the dictator’s son. 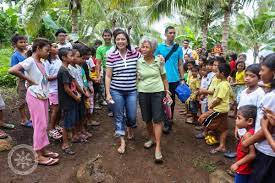 Visit to Brgy. Del Rosario to understand the hardships that the people living there go through everyday. Source: Leni Robredo Twitter Page

Her initiatives to help the people during several calamities and most especially during the pandemic amid measly budget for the Office of the Vice President have also been hailed creative, super-energized, untiring. Support for these therefore continues to pour in generously from the private sector, individuals and institutions. Obviously due to envy, the president and his spokesman have not a few times demeaned her efforts and at some point restrained her, regardless that they help ease the sufferings of the people.

Surveys before her announcement of candidacy put her at near bottom. The people’s clamor for her to run (as she hesitated partly for her and the endorsing party’s lack of resources) up to the groundswell of support and pledges for days after her declaration speech on Oct. 7, are however palpably changing the landscape. She is now the one to beat as the young mayor candidate topping the survey spotted quickly with a reckless tirade seeing the rejoicing and euphoria evoking the people’s mood on toppling Marcos who also happens to be his idol.

The next Philippine election is certainly worth the world’s watch. It’s deeply the battle of two strong ideologies, democracy versus authoritarianism, a polarity that puts walls and keeps doors ajar in the journey towards peace, cooperation and understanding.