Once again the group that brings together mothers and fathers who lost their daughters as a result of male violence demanded an audience with the President and delivered in a letter concrete measures to demand justice and prevent femicides. There have already been 200 so far in 2021. “Why do we insist? Because we are convinced that he has to listen to us. Our words are full of pain but also of the tremendous experience we have endured on our backs and in our souls”, says the text, which is reproduced here in full. Chronicle and photos of the 12th meeting of the group Familiares Sobrevivientes de Femicidios, in the middle of the rain.

After midday on a Wednesday with heavy rain and as every second Wednesday of the month, the group of Relatives Survivors of Femicides held their meeting and for the twelfth time, delivered a letter to the Casa Rosada to request an audience with President Alberto Fernandez. The request for justice for the femicides of their daughters – in a country where today there are 200 femicides, transvestides, transfemicides and Tehuel has not appeared for almost six months – the demand is imposed in a context that makes these urgencies invisible.

On this occasion there were no chairs or microphones for them to tell the state of their daughters’ cases due to the sustained rain. The mother of Camila Flores – 20 years old, murdered nine months ago in Santa Fe -, Susana and Daniel, the mother and father of Cecilia Basaldúa – the 35-year-old murdered in Capilla del Monte, Córdoba, whose body appeared on 25 April 2020 – and Alfredo, the father of Carla Soggiu, who appeared floating in the Riachuelo, four days after she activated twice the anti-panic button she had because her ex-husband had beaten and raped her.

With their umbrellas, in the rain, they hold up posters with the faces of their daughters. Camila’s mother can’t hold back her tears. There is pain in their eyes, but there is also determination to stand firm against impunity. 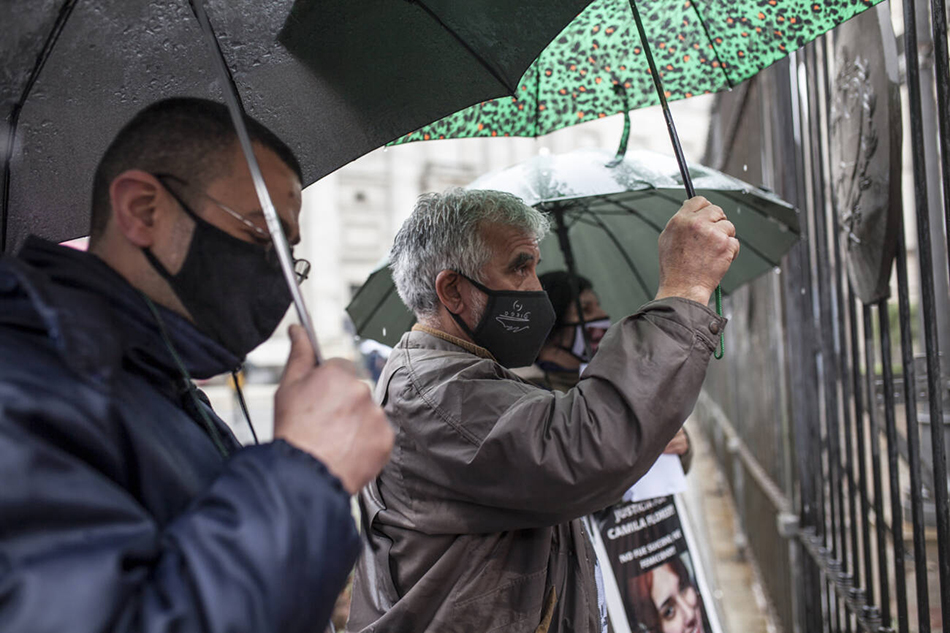 The singer Amalia Etchesuri reads aloud the letter that minutes later they will deliver to the Casa Rosada:

Since the beginning of this year, we have suffered 200 femicides and transvesticides and 166 children have been orphaned. We have also suffered 333 attempted femicides and we have carried out 274 mobilisations and marches to demand that they stop killing us. We continue to demand the return of Tehuel alive.

Since we began to meet in this square, we have presented a dozen letters asking to be received, accompanied by reports and concrete and urgent proposals, born from the ordeal that it represents for a family to have access to a fair and humane justice that investigates and punishes the crime of our daughters. We also present proposals for the State to prevent this violence and to provide timely and appropriate care for the children left orphaned.

In this long time, we have heard a lot of talk about the need for judicial reform, as a way to ensure that the State fulfils its obligations and guarantees our rights. We need facts, we demand concrete actions, we demand that the judiciary be democratised once and for all and forever.

This is letter no. 12 with which, with respect and hope, we ask that you receive our families. Why do we insist? Because we are convinced that you must listen to us. Our words are full of pain but also of the tremendous experience we have endured on our backs and in our souls. We want to transfer this burden to you, it is yours, it is up to the highest authority in the country to do everything it can and more to convey to the whole of society that no mother, no father, no brother or sister should ever have to bear it again, no family can carry this burden alone. It is too much.

After the reading, they walk to the entrance of the Casa Rosada, where, as every second Wednesday of the month, they are asked who they are and what they want. Daniel Basaldúa explains: “We are Relatives Survivors of Femicide. They killed our daughters, we want to leave a letter addressed to the President so that he receives us”.

Twelve times the same ritual, the firm step of those who never tire of demanding justice, the tears for what happened and the unpostponable cry and the tireless struggle to demand justice so that it doesn’t happen again.