With the aim of understanding and socializing the characteristics of the current techno-digital system and identifying strategies of struggle to curb the unwarranted corporate monopolistic appropriation of these technologies, the Sessions “Utopias or Dystopias. The Peoples of Latin America and the Caribbean in the digital era” took place. 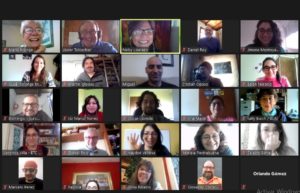 Transnational corporations have seized control of digitalization, offering capitalism in decline a perspective of reconversion of its crisis of productive profitability. The ultra- minority faction of economic power has even found a way, in the applications derived from the current technological model, to hinder the free play of democracy in order to prevent the transformation of the exclusionary system.

However, despite the strong impact this has on individual’s daily lives and on collective aspirations of the peoples, the debate in the citizenry and among the social movements of Our Global South is barely beginning, being still largely restricted to activists in the digital sphere.

In that context, this event, promoted by the Forum on Communication for the Integration of Our America and the Latin American / Caribbean space Internet Ciudadana, in conjunction with various organizations from the region, discussed in three consecutive sessions the formulation of alternatives and possible joint actions to meet the challenge.

In a previous phase, working groups analyzed the main impacts of digitalization in areas such as Work and Employment, Communication, Education, Agriculture and Rurality and Collective Digital Rights, resulting in some initial demands and proposals.

The first meeting (28/4) was devoted to the debate on “Public Policies for Digital Sovereignty and Democratization”, in which three main ideas were reaffirmed:
Internet connectivity as an essential public service and regulated as such, the requirement of legislation so that people and communities can exercise individual or collective power over their data and the strengthening of technological sovereignty – both national and regional – as an indispensable factor for developing the digital economy without generating new modes of dependence.

In a second session (5/5), aspects related to “Good practices in the use of technologies and the need for critical digital literacy” were addressed Digital autonomy, as a necessary condition to overcome digital divides and break the dependence on corporations, mutual support and networking to enter the technological dispute and the indispensable capacity-building to be able to take on these challenges, were the axes raised for discussion.

As in the first session, numerous related proposals arose, alongside possible strategies to be implemented to promote these points, as well as the certainty that social awareness and, in particular, that of an organized citizenry, is an essential condition to advance in the achievement of public policies and the adoption of other uses and technologies.

On the closing day, whose theme was precisely the construction of “An agenda of social awareness for digital democratization”, various activities were identified to broaden the echo of these questionings and proposals and thus increase the role and impact of the organized social base in the design, implementation and governance of these technologies.

The initiative of these Sessions has already brought together peasant and trade union organizations, communication spaces, technological cooperatives, students and academics, digital activists, political activists and professionals of the infrastructure sphere, from some twenty countries in the region.

However, the challenge ahead is enormous. These participants all identify the need to incorporate digital issues into the demands of popular movements, reaching into territories, in order to generate a critical mass essential for achieving broad transformations.

Meanwhile, it is imperative for Latin America and the Caribbean to advance as a region in its sovereignty and integration, to face the challenges arising from a past of colonial exploitation and to avoid falling into a new technological colonialism.