The recent violence at the al-Aqsa mosque/Temple Mount area and in the Old City of Jerusalem has spiralled into something bigger and more dangerous. Clashes between Israeli security forces and Palestinian protesters at the weekend have left hundreds injured. Tensions rose further on Monday and Tuesday after Israeli airstrikes launched in retaliation for Hamas rocket attacks killed 35 people, including 12 children, in Gaza City.

This latest episode cannot be attributed to a single cause. It should rather be connected to a broader landscape of destabilising factors whose cumulative weight led to the current crisis after months of incubation.

A chain reaction was nevertheless triggered by ongoing attempts to evict Palestinian families living for generations in the east Jerusalem neighbourhood of Sheikh Jarrah. A legal battle is being waged between the Palestinian residents and Nahalat Shimon – a settler organisation tied to the Zionist movement in Israel which is trying to alter east Jerusalem’s demographics in favour of a Jewish population.

Support towards the Sheikh Jarrah families instantly came from several Palestinian constituencies, including an unprecedented number of Arab citizens of Israel from Umm al-Fahm and Jaffa. At the same time, thousands started demonstrating at Damascus Gate which in recent weeks has become east Jerusalem’s “Tahrir Square” – the centre of Egypt’s 2011 “Arab Spring” revolution. Many of the protesters were Muslim worshippers who came together at the gate after having attended prayers at al-Aqsa Mosque.

It is worth noting that the crisis unfolded during the final days in the holy month of Ramadan: the climax of the Islamic calendar but also the most volatile time of the year in Jerusalem. On Friday May 7 alone, some 200 Palestinians were seriously injured and many more were arrested following fierce confrontations with the Israeli police. 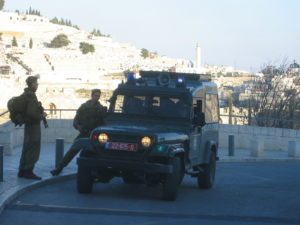 Israeli police were aggressive in their attempts to curb demonstrations, which soon backfired with an with an expansion of Palestinian protests across Jerusalem, the West Bank and many Arab villages in central and northern Israel.

Turmoil on both sides

Inability to contain violence in Jerusalem and other occupied territories is partly a result of internal issues with both the Palestinian leadership and the Israeli government. On the Palestinian side, there is a power struggle taking place between Hamas and the president of the Palestinian Authority, Mahmoud Abbas. Hamas deliberately heightened tension with Israel by firing rockets from Gaza as a propaganda strategy to build political capital at Abbas’ expense. He, in turn, has postponed elections to the Palestinian Legislative Council for fear of losing ground against his Islamist rivals.

Israeli politics, meanwhile, has reached a debilitating impasse after four general elections failed to establish a workable government. This has had severe ramifications for the handling of the crisis.

And it’s important not to underestimate – as Israel’s security chiefs obviously have – the disastrous consequences that COVID-19 has had on east Jerusalem, leaving all too many young Palestinians unemployed and even more hopelessly alienated from their respective political leaderships. The young Palestinians demonstrating on the steps of Damascus Gate, the streets of the Old City and al-Aqsa are not animated by their parents’ ideologies, but mostly a sense of anger, revulsion and frustration.

With such soaring tensions and political dysfunction on both sides, the situation appeared likely to spin out of control during the flag march scheduled on Jerusalem Day. That event takes place annually to commemorate the reunification of Jerusalem by Israel after the six-day war in 1967.

In recent times, with the growing influence of the settler movement within the Netanyahu government and Israeli society, the parade has become a cornerstone in the national consciousness of many religious Zionists. Every year, before reaching the celebrations at the Western Wall Plaza, hundreds of young Israelis make their way from Sheikh Jarrah, pause at Damascus Gate and then continue along Al-Wad street – the main artery in the Muslim Quarter in the Old City.

During the march, young Israelis wave their national flags defiantly and chant patriotic songs. Meanwhile Palestinians watch the procession from behind the security fences that the Israeli police forces put in place especially for the occasion.

The way this celebration cuts across their everyday spaces is felt by most Palestinians as a blatant provocation and a painful reminder of the humiliation Israel inflicted on their national aspirations in June 1967. Not only did the Six-Day War mean large-scale Palestinian dispossession, it also established Israeli control over al-Quds (Jerusalem’s Arabic name) and al-Aqsa mosque, the third holiest site in Islam and a primary symbol of Palestinian identity.

On Sunday night thousands of Palestinians barricaded themselves in the mosque with stones and Molotov cocktails in anticipation of the Jerusalem Day Parade. According to the Palestinian Red Crescent, clashes between Israeli police forces and the demonstrators, which inevitably unfolded at al-Aqsa on Monday morning, left another 300 Palestinians wounded. That prompted an Israeli decision to prevent Jews from entering the al-Aqsa mosque/Temple Mount area during Jerusalem Day.

Sensing quite how dangerous it would be to allow a march to follow the route through some of the Palestinian population’s most symbolically important spaces – and, with Jerusalem already on a knife edge – the Israeli authorities announced that the flag march could go ahead but rerouted its course away from the Damascus Gate and the Muslim Quarter. The Israeli High Court of Justice also deferred the hearings on the planned evictions of Palestinian families in Sheikh Jarrah that had been scheduled for Jerusalem Day.

But these attempts to de-escalate appear to have been too little and too late. As we now know, Hamas made the decision to fire rockets at west Jerusalem and southern Israel, and the Israeli Defense Force retaliated with air strikes, killing 25 people. Once more, Jerusalem is ablaze, with potentially dire consequences for the stability of the whole region.