As a performing artist and music producer… 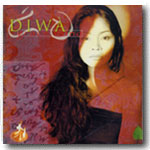 Here is the link to this album on youtube: https://www.youtube.com/watch?v=ehWnJZKl7v4&list=PLNJdVhwrJXJHltHmWsIKL2Mv3J4nVv1zF

As a singer, Grace has been invited to sing in many parts of the world, often in collaboration with traditional musicians.

Here is the link to a clip of GRACE NONO at the 2019 SOUL FORCE SACRED MUSIC FESTIVAL https://www.youtube.com/watch?v=ugUIRAKrAAY

As a scholar, with a doctorate in Ethnomusicology from New York University, with decades of ethnographic research behind her…

Grace published two award-winning books in the Philippines – Song of the Babaylan: Living Voices, Medicines, Spiritualities of Philippine Ritualist-Oralist-Healers (2013) and The Shared Voice: Chanted and Spoken Narratives from the Philippines (2008). She has also contributed articles to edited volumes about cultural heritage, healing, and decolonization. At the moment, Grace is working on her third book about the agency of Native communities and the endurance of their ways despite five centuries of colonial and neocolonial histories. This book will be published later this year. 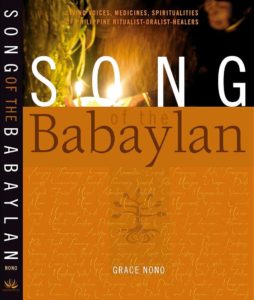 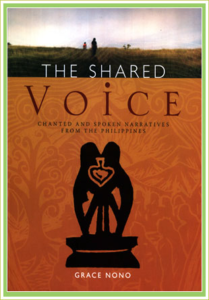 As a grassroots cultural facilitator…

Grace founded twenty-six years ago the Tao Foundation for Culture and Arts, a non-governmental organization dedicated to cultural revitalization. It is run by artists, scholars, and community leaders. The foundation helps to facilitate the exchange, transmission, and development of cultural knowledge and practices, in ways that contribute to the empowerment of cultural masters and practitioners.

Her body of work surely merits the number of awards she has received for her dedicated work through the years—45 awards to date—for excellence in music and vocal performance, research and writing, and work that contributes to preserving Filipino culture and indigenous arts.

This year, Grace Nono was recognized by the National Commission for Culture and the Arts (NCCA) as one of the awardees of its first-ever SUDI Awards, which seeks to honor the most outstanding musical achievements in the Philippines in the past two decades.

The award recognizes “outstanding contributions of Filipino musical works, creators, institutions, and researchers across genres and modes of productions with the highest standard and artistic excellence” be known as such.

In a post, Grace thanks the NCCA and goes on to say “I dedicate this award to the many elders in Mindanao, Visayas, and Luzon who have generously taught me aspects of their musical and related knowledge, helping me to decolonize my voice, proving to me that knowledge does not only reside in books or in schools first instituted by the colonizers, but in the voices and songs of our people in their ancestral lands and beyond. Daghang salamat, mga Datu ug Bae, mga Manong at Manang. I honor you all for asserting your musical and other traditions and for sharing these with those who you deem sincere in learning. The pursuit of ancestral knowledge is a challenging path to take, but it becomes all worthwhile when we begin to reclaim the dignity of our ways that we were once told were undeserving. I also dedicate this award to the younger generations, who, once awakened to the power and beauty of ancestral music, can, if they wish to, seek permission to learn from cultural practitioners, and if granted such permission, can embark on sustained, reciprocal relations with their mentors for the benefit of all.”

Grace Nono’s work has three interlinked faces: arts practice, as a singer mentored by master oralists; scholarship, as an ethnomusicologist and interdisciplinary scholar who writes about Philippine traditional musical practices in relation to issues of gender, religion, healing, and decolonization; and grassroots cultural facilitation, as the founder of the Tao Foundation for Culture and Arts that works with various communities.

I have followed Grace’s journey through the decades, first as a young girl from Agusan del Sur in northeastern Mindanao who studied at the prestigious Philippine High School for the Arts; then as a student of the Humanities at the University of the Philippines. I have watched her perform in folk houses and cafes in Manila and Baguio where she sang with the rock group, the Blank, doing Western rock covers. Later, she took a sabbatical and renewed links with her roots, the music and arts of Mindanao. When she returned to Manila she began to create albums of original works inspired by indigenous sounds, in collaboration with Bob Aves. This catapulted Grace’s local music to what has been labeled world music.

Needless to say, her albums are part of my life and times as much as her books and writings which have resonated with me deeply, enriching my cultural identity as a Filipina.

If the music speaks to you, click Subscribe and share with your friends.
Click View Full Playlist or the song titles to see the descriptions and credits.
Though isolated in these difficult times we don’t have to be alone by listening together to music we resonate with. Blessings to all.