The Permanent Centre for Repatriation (CPR) located in Corelli street, Milan, Italy, earned its nickname ‘Milan’s Little Guantanamo’ when it was closed after numerous complaints of violence and power abuse in 2013 (at the time its name was CIE, Centre for Identification and Expulsion).

Now, since its reopening in September 2020, the situation does not seem to have improved. That’s why numerous national associations and syndicates joined up to sign a petition asking for its closing.

CPRs are centres where migrants without a legal permit to stay on Italian soil are detained, waiting to be sent back home.  However, the repatriation can happen only in the presence of an agreement between the ‘hosting’ country and the country of origin. Otherwise, after 90 days of detention, the illegal migrant is expelled with the warning to leave the country within 7 days.

“The ‘expelled migrants’ mostly remain in the country illegally, they are discovered again and closed again in a CPR”, explains Anna Camposampiero, member of the Milan-based organization No more Lager- No CPR. “It’s not only newcomers that end up in the detention centres, but as well people who have been living in our country for years. Some of them lost their residence permit for being unemployed“ she says. 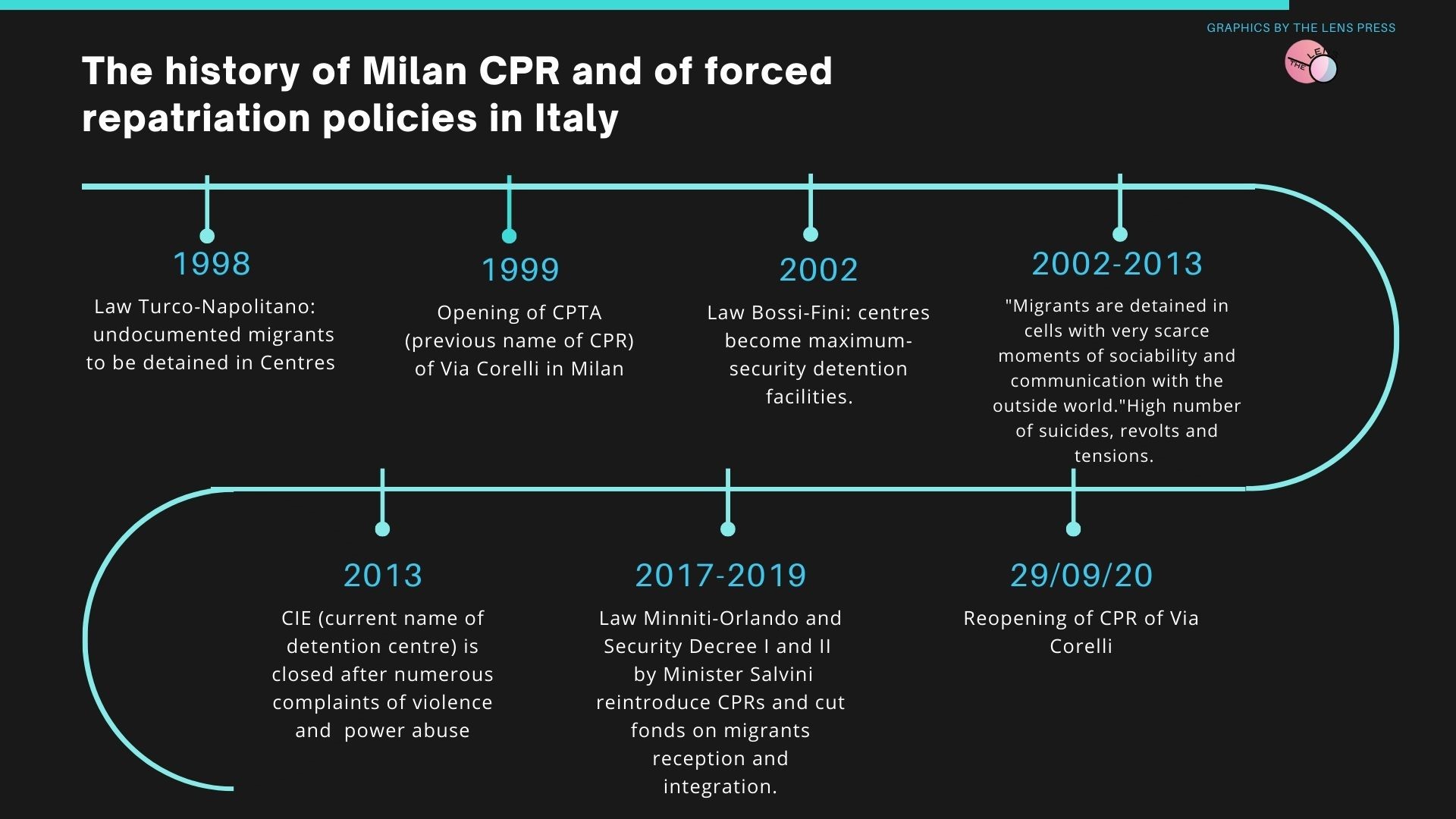 The CPR of Milan is currently destined to Tunisians migrants. In fact, due to the economic crisis, exacerbated by Covid-19 pandemic, Tunisia is witnessing many protests and unrest, and the number of those who decide to undertake a dangerous journey by sea to reach the Italian coasts is increasing.

At their arrival, migrants are usually first detained in a hotspot, and then they have to quarantine on a cruise ship for two weeks or more. Afterwards, they are often sent to Milan and to its airports to be expelled. According to the agreements between Italy and Tunisia, there should be two repatriation flights a week. As Camposampiero explains, when migrants enter the centre they cut out of the external world (their phones are taken and the public phones legally required are still non-existent), inadequate number of translators, no legal assistance and non-sufficient medical care. “It’s worse than prison, and totally disproportioned for administrative detention,” she says. Violence, self-harm and suicide attempts are frequent.

Entering in Via Corelli is a nightmare also for police officers, who have to escort all operators in their daily tasks. There have been at least 6 revolts since September, that created a lot of damage in the CPR. “Turmoil is the only way for them to be heard and express their frustration,” says Camposampiero. 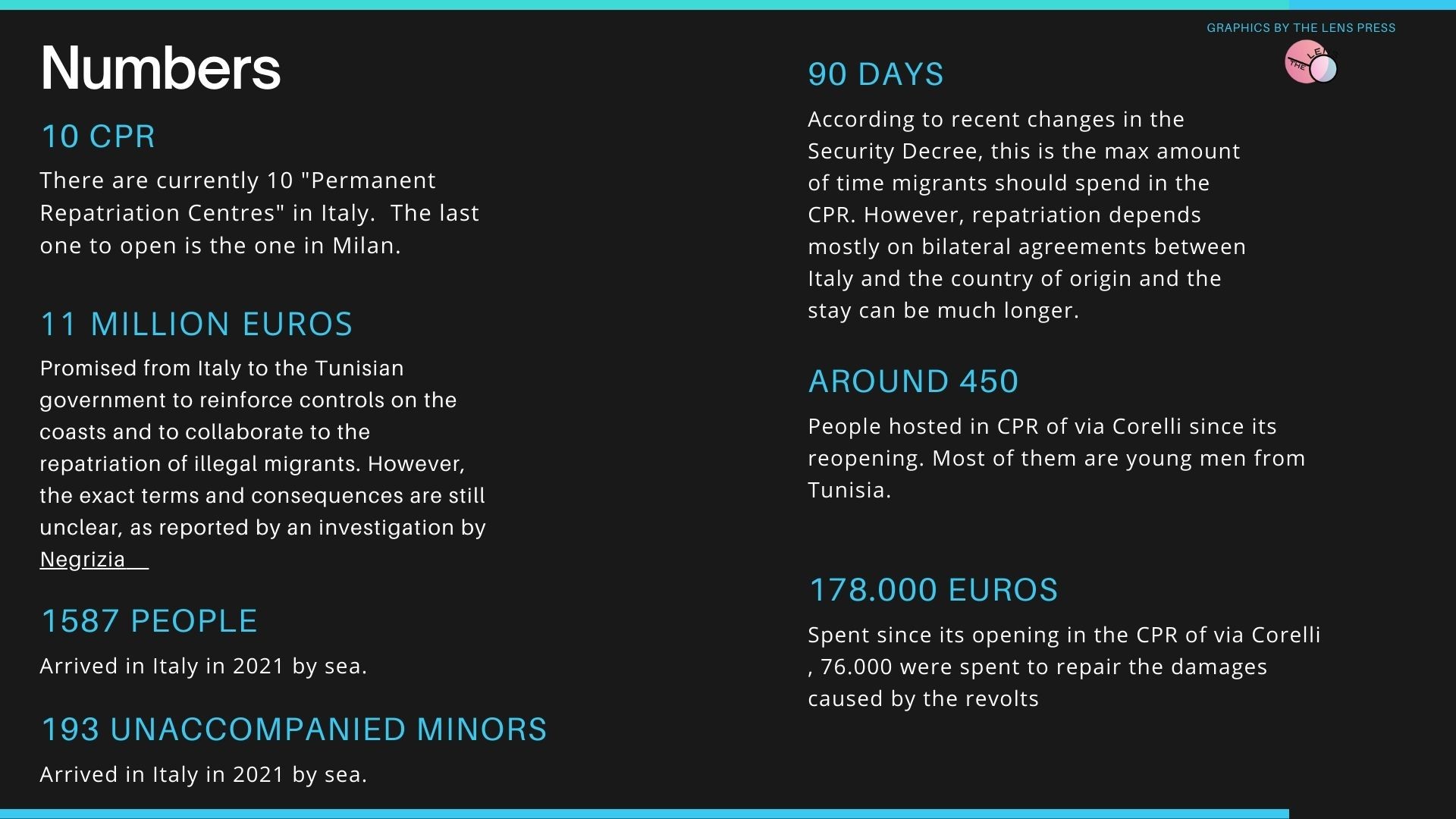 According to Camposampiero in CPRs migrants are denied the right to apply for asylum. Since Tunisia is considered a ‘safe country’, just a few days after their arrival at the Centre the judge will sentence for repatriation, without giving them any chance to explain their reasons.

“The problem is not about Milan, it’s about Italy, about Europe.  If we keep considering migrations as an emergency, we’re never going to understand the complexity of this phenomenon and face it in an adequate and human way,” says Camposampiero.