In these virtual times, even the World Social Forum is being organized and will take place over the Internet from 23rd to 31st January 2021.

The Multiconvergence of Global Networks (MRG) will be present with its own activities (Jan. 24th and 27th at 11 am in Brasília) continuing the monthly virtual meetings organized in 2020, as well as participating in events organized by other networks. The 5th meeting held on December 20, 2020 and warmly organized by VOS – Open Viral Space, had the lively participation of 33 people from Africa, Latin America, Asia and Europe, among representatives of 13 networks and interested independent people.

The main themes of the meeting, which will be deepened at the WSF, were: 1) the experimental co-construction of a parliament of planetary citizenship (theme of 01/27), and 2) the discussion of the proposal of a Conviviality Pact for the Multiconvergence of Global Networks, which promotes the exercise of new political practices.

The 5th meeting allowed for the maturing of the proposal of a Parliament of Planetary Citizenship, which had already been outlined in previous meetings, particularly the one organized by Convivialist International. Important issues were raised and will be further detailed in the WSF, among them: the composition and number of components of the Parliament, the construction of its legitimacy as a sample of Humanity in its richness and diversity, the characterization and nomenclature of each of the chambers of the Parliament, etc. The need for wider dissemination of the proposal, the involvement of other networks and the construction of links with similar initiatives were other issues raised, as well as the feasibility of already carrying out a prototype of the Parliament in the year 2021. It was pointed out that to make the 2021 experience feasible, in principle carried out internally among the members of the participating networks, it will be necessary to stimulate the broad participation of other network members.

The very rich discussion brought related themes, methodologies to be tested, and very concrete concerns, such as ensuring the representativeness of the experience. How to guarantee the presence of people with difficulties of access to electricity and the internet (which happens in so many places in Africa, for example, and in most of the ancestral communities worldwide), with so much wisdom and governance experience to share? How to build bridges with other networks, especially from other continents and speakers of other languages than the four present at the meeting? How to make possible the diversity of representation that a democratic Parliament needs to have? A particularly debated topic was the articulation of diverse territorial scales, guaranteeing the participation of people from grassroots territorial organizations, avoiding the elitization and excessive intellectualization of the experience.

In relation to the second point, on how to build a Conviviality Pact among the networks that will participate in the pilot experience, it was evident that if the people who represent the networks do not know each other at all to build an environment of trust, all the effort can be lost. The internal quarrels of the emancipatory movements and progressive parties are in the minds and experiences of many people who participate in the MRG. Therefore, building a pact on how to avoid them, by building unity and mutual respect in political dynamics will be the theme of the meeting on 01/24/2021 at 11 a.m., Brasília time. The proposal for a Pact that already circulates in the networks’ environment will be presented and the famous Charter of Principles of the WSF will be honored in this celebration of the 20 years of the WSF’s life. This Charter, which represented a great milestone in the construction of a planetary citizen policy and is still valid 20 years later, needs to be improved. The theme of coherence between what is thought, what is desired for the world, what is said and what is done is a watershed for an effective and transforming policy of planetary citizenship. Let us debate, let us unite, let us act!

Multiconvergence of Global Networks invites you to the 20th World Social Forum
(January 23 to 31, 2021)

…When we will be sharing these two proposals and exchanging experiences in two online events: 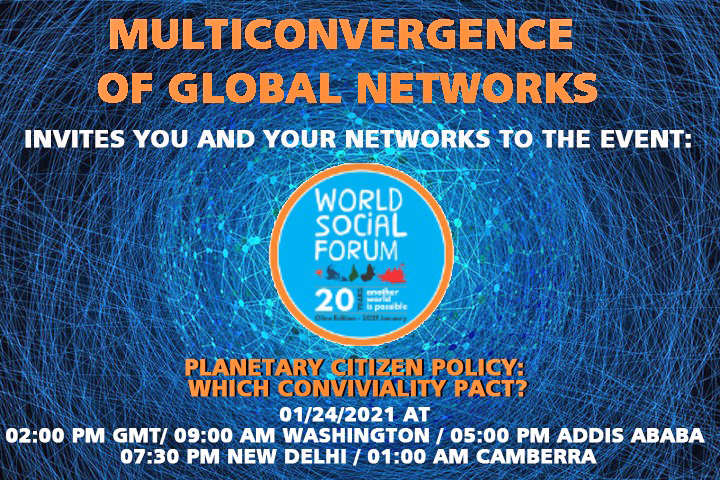 Based on the innovative Charter of Principles of the World Social Forum two decades ago, we will discuss new ways of living in progressive transnational political environments. Appraisal of the proposal of the MRG Conviviality Pact.

(Event to be held in Portuguese with simultaneous translation into Spanish, French and English).

To participate, start making your registration now at the WSF: https://join.wsf2021.net/?q=node/11

The Zoom link to access the event will be sent soon! Stay tuned! 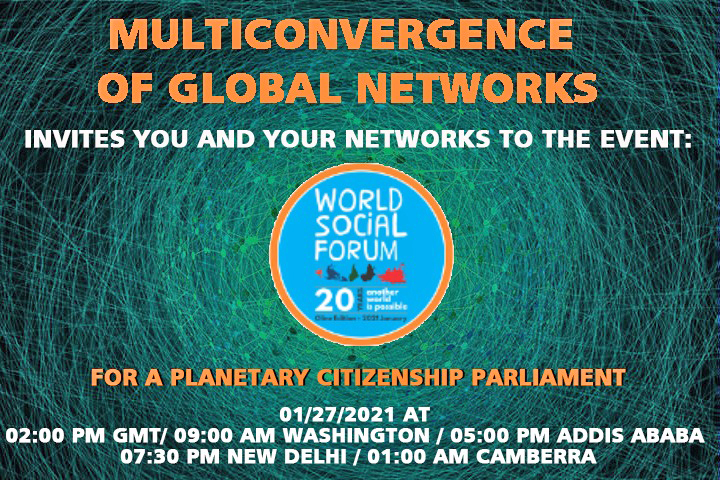 The discussion about the need to create democratic global governance common to the whole Earth starting from the peoples has been going on for a long time. Initiatives in this direction already exist and are very welcome. Multiconvergence of Global Networks (MRG) has an experimental proposal and invites interested persons, movements, and institutions to advance collectively in debate and co-construction.

(Event to be held in English with simultaneous translation into Spanish, French and Portuguese.)

To participate, start making your registration now at the WSF: https://join.wsf2021.net/?q=node/11

The Zoom link to access the event will be sent soon! Stay tuned!