It is said that pictures are worth a thousand words, and this is, of course true.  Yet, in these months of COVID, when children have been deprived of their “life as usual”, parents, teachers, our friends and neighbors have taken steps to ease the burden for each other and strangers alike.

“Keep in mind, he has been her cheerleader since he watched the Democratic primaries!”  As Cindy says, “We taught him early on the importance of voting and the civic duty we are blessed to have. People have died for our right to vote. He has accompanied us to every election whether for our school budget, the Presidency and all the elections in between. Those experiences lead to conversations about the candidates; the pros and cons and of course, respecting differences of opinions. He developed a love of history and presidents. We’ve taken him to Washington DC twice, Mount Vernon, and Monticello. Next stop, Philadelphia.” 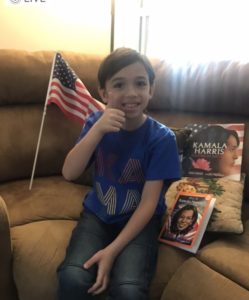 Luke started reading about candidate Kamala Harris, watching news broadcasts and was innately drawn to her smile, her personality and exuberance.  “I really like Kamala because she is like the first of everything mom! She was also the first Black woman Attorney General and Senator of California!  And NOW the first Black and Asian female Vice President!”, says Luke today with a broad smile.

For Luke’s birthday in August, his Aunt Lisa bought him a book about Kamala Harris and his Aunt Aña bought him a Kamala shirt for Christmas. They both knew how much Luke loved her!  And as January 20th drew closer, he decided to buy another book, Who is Kamala Harris? with his Christmas money. Since then, Luke has been following her to today’s Inauguration and her being sworn in as Vice-President of the United States.

And, THIS is only the beginning!

j.jill
Still seeking to meet Trust where She stands, J.Jill embraces service as key to gratitude and balance in life. She feels most serene in freshwater woodlands and has shared space-time on terrain of her Ligurian and Oscan ancestors. Today, after over thirty years of service in children’s programs, secondary, university and adult education, she accepts and offers unpredictable life-gifts on the Matinecock-Algonquin earth of Long Island.