On October 20, Pepe Mujica resigned his seat in the Uruguayan Senate. At 85, it is not the first time he has resigned. He had already done it in August 2018 “out of fatigue”, but he returned and turned out to be the most voted senator in last year’s elections in his country. Now he is leaving because, as he explained, “the pandemic has kicked me out.”

The formal resignation he presented to the camera reads:

(…) The role of senator imposes, among other things, a strong and permanent direct relationship with stakeholders and social groups. It involves receiving citizens and visiting them sometimes in their workplaces, to receive their problems and their stories. For an elderly person who also suffers from an immune disease, these times of pandemic (…) are not recommended if the miracle of living is valued. This situation obliges me (…) to request that I resign from the position granted to me by citizenship. “

It is at least rare for a politician to resign from a position such as senator, “because he cannot continue visiting his fellow citizens to find out what is wrong with them.” But Pepe is a man of unusual measures and attitudes. Among other things, during his presidency, abortion was decriminalized, equal marriage was approved, and marijuana was legalized. Meanwhile, he never accepted a driver and kept driving his old car; donated more than 90% of his salary as president; and, he continued to dress simply even on gala occasions –generating a certain “alien shame” to some of his peers. He continued to live in the same rural house as always and declares that he does not hate anyone despite the almost 15 years in prison he suffered, subjected to inhuman treatment.

In an environment with so many « Virus de Altura »(1)with so many liars and so many opportunistic people, Pepe has been and is for many a refreshing and inspiring reference. This is demonstrated by many people and events, including the printing of the books of his speeches in Japan, including an illustrated children’s version distributed in public schools. This is demonstrated by the affection of humble people from all over America, who understand his simple way of saying and doing things, and the accompaniment of 10,000 young students who applauded him a few years ago and celebrated his talk of almost two hours at the State University of Rio de Janeiro. It was demonstrated yesterday by the Senate employees who bade him farewell at the door as he walked slowly away after resigning: “Bye Pepe, thank you. We are going to miss you ”, they said to him like someone who is seeing off a friend.

(1)(NT : « High Altitude Virus (Virus de Altura)» is what Laura Rodriguez explained in her book « El Virus de Altura »(1993, CESOC Ediciones, but the expression is from Silo)« It is something that happens to many people who are in political or non-political positions. It also happens to artists sometimes. The altitude virus is when people believe that they have reached a certain position because of their own qualities and not because there has been input from many (other )people. Then, deep down, what begins to happen is that they forget the contributions from the other people, and what has been behind to help them get to their position. They forget about the people, and when they forget about the people, they begin to make decisions against the people. That is the most regrettable. » 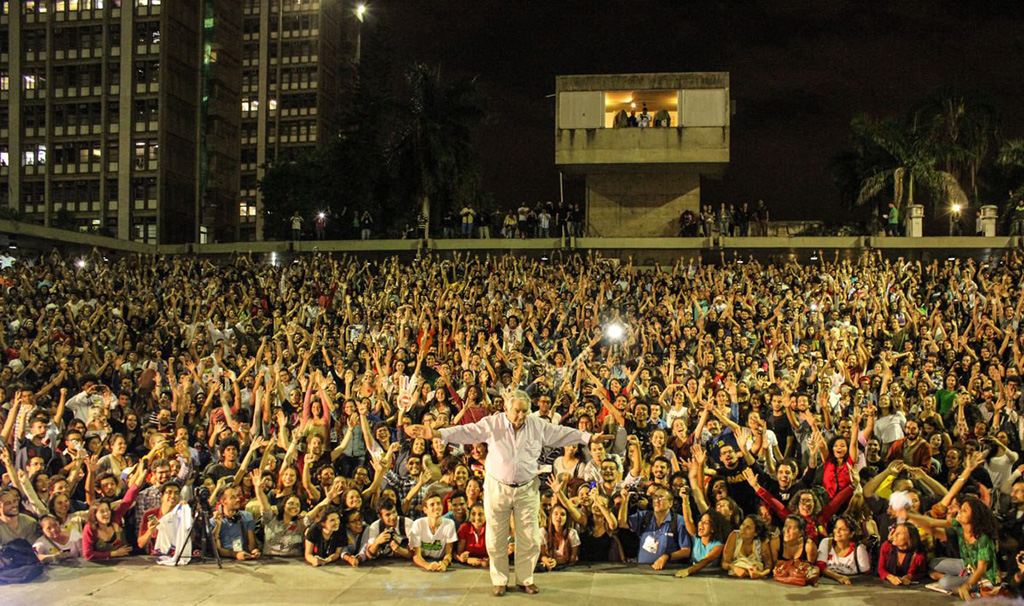 Here is the full text and video of his resignation speech to the Senate:

Genius and figure to the grave. I have to thank you for so much recognition. I want to be grateful because there is a time to come and a time to go in life. I have to thank the officials who in these 26 years, in this house, have supported me. I know some of them are no longer here.

I also want (to thank) many colleagues, deputies and senators with whom I have shared hard and even humorous hours. I want to symbolize them in one, who sat in this (same) armchair, (Alejandro) Atchugarry, a senior brand liberal, not a liberal in economics (but) in humanities. We knew how to be adversaries without an offense over the years and when it was my turn to be a minister, he called me there, in a bowling alley, and said: «Pepe, be careful with this, and with this, and with this … and when you go to sign a piece of paper, make sure it has been reviewed by a public defender ». And when he found out that we had contradictions in our government, he called me. “Pepe …” A man of superior category who is not among us and I want to name him as a symbol of something lasting that must be preserved, which is bonhomie, despite the risks of the political system of this country that, being small, he has to flee from the cracks and has to achieve an average of the common thing that is maintained over time throughout the years.

And then I have to make this decision to thank you for the patience you have had to put up with me and you have been very complimentary, too complimentary. I have my fair share of flaws. I am passionate, but in my garden, I have not cultivated hatred for decades because I learned a hard lesson that life imposed on me … that hatred ends up stupefying because it makes us lose objectivity in the face of things.

Hate is blind, like love, but love is creative and hate destroys us. And one thing is passion and another thing is the cultivation of hate.

Time imposes changes and we are entering another era, the digital age. Not better, not worse … different. I think that technological problems have appeared … that are capable of predicting what character is like and what the driving lines of human behavior are essentially like – sometimes without talking to us – through the digital world. And this is going to be a dilemma that the states and political systems of the future will have: to what extent are privacy and human dignity violated and to what extent is freedom? Because until recently we passionately believed in a definition of freedom and now science tells us: “If freedom is meant to follow desires and inclinations, freedom exists. If, by freedom, it is understood that we are capable – we – of gestating those inclinations and those desires, freedom does not exist.

I have lived with a definition and they changed the whole script now. New generations have this problem and politics will have to take over. Because politics is the fight for human happiness, even if it sounds like a chimera.

And for that, my thanks. And finally, many people have supported us these years, twenty-odd years and I have to be grateful to them, those who decide anonymously, out there, within the people. In politics, there is no succession. In politics, there are causes, and men and women pass too. We all pass. Some causes survive and have to be transformed and the only thing permanent is change. Biology imposes changes, but there must also be an attitude of change, of giving the opportunity to new generations, of building, helping to build the future since life is leaving us –and it is inevitable– but the causes remain.

I’ve been through everything in life. I have been tied with wires for six months with my hands behind my back. Get rid of my body because I can’t stand being in a truck for two or three days. Spending two years without being taken to bathe and having to bathe with a bottle, a cup of water and a handkerchief. I’ve been through everything, but I don’t hate anyone. And I want to convey to young people: you have to give thanks to life. Succeeding in life is not winning. Succeeding in life is getting up and starting over every time one falls.