Spanish authorities should immediately alleviate overcrowded and unsanitary conditions on the Arguineguín pier, Gran Canaria, one of Spain’s Canary Islands, Human Rights Watch said today. Since November 7, 2020, when Human Rights Watch visited the pier, the number of migrants and refugees detained there has more than doubled to over 2,000.

The growing humanitarian crisis follows a sharp increase in recent months in the number of people attempting to reach Europe via the Canary Islands, in the Atlantic Ocean off the western coast of Africa.

“What I saw a few days ago was a row of crowded tents where people are held for days on end, sleeping on the ground, 30 or 40 people sharing a portable toilet,” said Judith Sunderland, acting deputy Europe and Central Asia director at Human Rights Watch. “I cannot imagine the situation now with over double the people. Even assuming the best intentions of those working there, these conditions do not respect people’s dignity or basic rights, nor do they reflect well on Spain.”

Human Rights Watch is one of the few independent observers to have visited the pier. The government has blocked access to journalists, photographers, and television cameras, citing privacy issues. At the time of the visit, 835 people were there, according to the Spanish Red Cross, which runs the camp, including roughly 300 who had been rescued overnight. By November 10, over 2,000 people were huddled on the pier.

The emergency camp, whose formal capacity is around 400, was set up in August for medical screening, including Covid-19 testing, and police identification and registration procedures. On the day of the Human Rights Watch visit, there were 14 tents, each with a portable toilet, with a capacity for 30 or 40 people, plus a tent for showering and for changing. One tent is reserved for women traveling alone and unaccompanied children, despite international guidelines that call for unaccompanied boys to be housed separately from women and unaccompanied girls.

The tents are floorless, with no beds or mattresses. People interviewed who had spent days detained on the pier said they were given two blankets, one to put on the ground and one to use as a cover. There is also a medical tent and a mobile hospital tent, and Red Cross ambulances onsite.

Human Rights Watch research in Arguineguín, based on interviews with migrants, refugees, and civil society actors, as well as direct observation, indicates that conditions on the pier are wholly inadequate even when under capacity. In addition to poor conditions, the procedure on the pier raises serious concerns about access to information and respect for the right to apply for asylum.

Based on interviews with Red Cross personnel on the pier, Covid-19 protocols include routine PCR testing for everyone, an isolation tent for people who exhibit symptoms consistent with Covid-19 or who have tested positive for the coronavirus, and the distribution of surgical masks.

Despite these protocols Human Rights Watch met two women who the Red Cross said had tested positive but were still living in a tent with other women and children. People who have traveled separately are sometimes placed together in tents, and social distancing is virtually impossible. At the time of the visit, a Red Cross official said there were 55 people who had tested positive for Covid-19 awaiting transfer to a dedicated facility for isolation, monitoring, and treatment. However, the bus company was refusing to take them, citing health concerns.

Many people appear to be detained on the pier for longer than the 72 hours permitted under Spanish law. Two women from Mali interviewed on the pier showed proof they had been there since October 22, over two weeks. Men and two boys, ages 15 and 17, interviewed after they were transferred to hotels, said they had spent between three and ten days on the pier. Everyone arriving in a hotel from the pier must do a 14-day quarantine before being able to move freely within the hotel and outside. At the hotel Human Rights Watch visited, managed by the Red Cross, everyone was wearing masks in all shared spaces.

Everyone interviewed had been given an expulsion order regardless of their personal circumstances and often without clear information in a language they could understand or access to a lawyer. The majority of those interviewed did not understand the meaning of this document, could not recall being given an explanation of its content or meaning in a language they could understand, and could not recall speaking with a lawyer before being asked to sign it. None of the people interviewed were told by the police or anyone else while they were held at the pier about their right to apply for asylum. 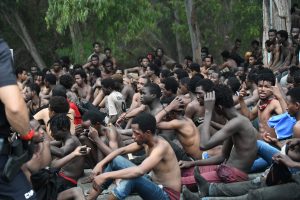 153 migrants manage to pass through and reach the CETI, where the injured are treated by the Red Cross – Credits : Antonio Sempere

Human Rights Watch has documented obstacles and disincentives to applying for asylum in Ceuta and Melilla, Spain’s enclaves in Morocco, as well as at Andalusian ports.

The number of people attempting to reach Europe via the Canary Islands has significantly increased during 2020. So far this year, more than 13,800 people have reached the Canary Islands by boat, including 2,188 this past weekend. Border control measures in collaboration with Senegal and Mauritania, adopted after significant arrivals in 2006-2007, had sealed off the route.

After approximately 2,000 people arrived in the last three months of 2019, Juan Carlos Lorenzo, the head of the Spanish refugee organization CEAR in the Canary Islands, urged authorities to identify structures that could be used in the event of a humanitarian crisis.

The majority of boats are rescued by the Spanish maritime rescue agency, Salvamento Marítimo. Despite their tireless efforts, the Atlantic Ocean between the western coast of Africa and the Canary Islands is quickly becoming the most dangerous sea route in the world. The UN refugee agency UNHCR estimates that more than 600 people have died or been reported missing at sea so far this year.

The Spanish government does not provide a breakdown by nationality, but most appear to come from Senegal, Mali, Morocco, Ivory Coast, and Guinea. According to UNHCR, an August profile study revealed that 30 percent said they left their country due to conflict and widespread violence, while 32 percent cited persecution “due to sexual and gender violence, ethnicity, religion, political reasons or forced marriage and recruitment.”

On November 6, Spanish Interior Minister Fernando Grande-Marlaska announced that Spain would close the camp on the Arguineguín docks and create a new reception area in a former munitions warehouse in Las Palmas, the island’s capital, with European Union support. Details about the installation, its conditions or capacity, or when it will become operational, have yet to be made available.

The Spanish authorities should quickly set up alternatives to the pier and ensure that people who have arrived on the islands have access to a fair asylum procedure, Human Rights Watch said. Stepped up transfers to the Spanish mainland could free up spaces in local hotels, otherwise empty due to the tourism crisis, where migrants and asylum seekers are accommodated upon release from police custody.

“Improvising a reception and identification camp on a pier was never a good idea and now the chaos there poses a real threat to people’s rights, health, and safety,” Sunderland said. “Times are tough, but Spain can and should provide a humane response to people arriving on its shores.”