The TPNW outlaws the development, testing, production, manufacture, possession, stockpiling, transfer, stationing and deployment of nuclear weapons. It also outlaws assisting, encouraging or inducing anyone at all from engaging in any of those activities. Why is that so significant?

While the treaty’s prohibitions are legally binding only in the countries (50 so far) that become “States Parties” to the treaty, those prohibitions do not apply only to the activities of governments. Article 1(e) of the treaty prohibits States Parties from assisting “anyone” engaged in any of those prohibited activities. That clearly refers to private companies and individuals who may be involved in the nuclear weapons business.

Don’t Bank on the Bomb identifies 26 private companies currently involved in the nuclear weapons business globally. These include 15 companies based in the US, as well as a few based in India, China, and Europe. There are offices of at least one of these companies in two dozen of the countries that are about to become States Parties. Honeywell, for example, has offices in 13 of these countries. Many more of the companies have projects, including government contracts, in these countries.

More and more countries will be joining the TPNW in the coming months and years, and the pressure on private companies involved in the nuclear weapons business will continue to grow. These companies are already facing public and financial pressures not only from soon-to-be States Parties, but also from within their own countries. Two of the five largest pension funds in the world have divested from nuclear weapons, and other financial institutions are following their example.

Nuclear weapons still exist largely because the companies involved in the business wield such enormous power over government policies and decision-making, especially in the United States. They are among the largest donors to congressional re-election campaigns. They spend millions of dollars on lobbyists in Washington. And they provide a “revolving door” for out-of-work politicians who may be looking for a lucrative consultancy contract or a position on some company’s Board of Directors.

We are unlikely to see any significant change in US policy towards nuclear weapons until those companies start to feel some real pressure coming from this treaty. Until they realize that their own futures depend on diversifying their activities away from nuclear weapons, these companies will continue to be the driving force for maintaining these weapons.

Public pressure on the nuclear weapons companies in the 1980s led many of them to turn their backs on nuclear weapons. The politicians quickly followed, and we had the first major reductions of nuclear stockpiles since the onset of the Cold War.

This time, we have an even more critical need. We need the money and the brainpower being poured into nuclear weapons “modernization” to create the technologies needed for a green and sustainable future. We are now facing not one, but two, existential threats to our planet. By using the TPNW to put pressure on the nuclear weapons companies, we have at least a fighting chance of surviving both. 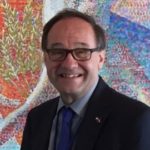 Timmon Wallis
Timmon Wallis is the Executive Director of NuclearBan.US. He holds a PhD in Peace Studies from Bradford University. He has served as executive director of Nonviolent Peaceforce, and he has directed peace-building projects in Colombia, Guatemala, Mexico, Northern Ireland, Kosovo, Georgia, Myanmar, Chechnya, Croatia, Sri Lanka, Philippines, and South Sudan. He has also served as editor of Peace News, as director of the National Peace Council (UK), as international secretary of Peace Brigades International, as training manager for International Alert, and as programme manager for Quakers in Britain. He was the founder and director of Peaceworkers UK.