The UK government has introduced hefty fines for those not following the latest rules brought in to manage the COVID-19 crisis. It has also told bars and pubs to close at 10pm and reduced the number of people that can congregate together to six.

The devolved governments have introduced different measures in their jurisdictions, and multiple different additional measures have also been announced in different regions, adding complexity and confusion.

Meanwhile, the UK prime minister, Boris Johnson, has said there will be a greater police presence on the streets and that the military could be called upon for support “to free up police”. The health secretary, Matt Hancock, has also stated that the government would not hesitate to introduce more measures if the number of COVID-19 cases does not fall. These statements are symbolic of the change in direction taken by the government as fears of a second wave turn to reality. Messages of solidarity are now notably lacking.

This punitive approach has resulted in an “us vs them” mentality across the UK, with the people seemingly being pitched against the government. Where the government initially addressed the population as allies in a crisis and imposed very little in the way of retribution when measures were not followed, it now commands from afar.

There is also fragmentation within the population. This can be seen in the recent pictures of young people throwing parties in university halls while many are following the rules and staying at home more. People are being shouted at in public for not wearing masks and others are being publicly shamed on social media for not following the rules. There has also been blame pointed at bars, despite the grave doubts and lack of evidence as to whether the 10pm curfew will have any effect.

This is a very different atmosphere to a few months ago, when the original message was “we’re in this together”.

The government now appears to be favouring more authoritarian, order-and-control tactics. But rather than changing behaviour, this runs the very real risk of civil unrest – as has already been seen with protests in London. These measures, rather than getting the nation to readily comply, encourage covert non-compliant behaviour. 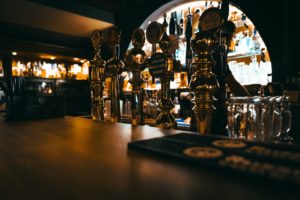 The punitive approach implies a lack in trust in the people and fails to appeal to the better nature of the population. As a result, some people will have the intention to avoid punishment rather than trying to understand why the rules are being imposed. Rather than feeling as though they have a stake in the wider positive goals of a society, some may feel excluded from it and therefore rebel. This atmosphere just contributes to people getting better at not getting caught.

The simple, yet effective, approaches at the beginning of the pandemic appeared to be based on nudge theory. These techniques – using subtle nudges to steer behaviour – work well in loose societies such as the UK, where people are not used to being told what to do to this extent. Subtly encouraging desired behaviours is a more effective way to inspire change in societies where people are not accustomed to having their freedoms restricted without extensive democratic questioning.

The freedom of choice in a loose society means that how these measures are pitched to the population is of utmost importance. Engendering a sense of solidarity and faith in the government is a key element. Changing behaviour is notoriously difficult and successfully getting a whole population to comply with something they do not like requires trust. In the early days of the pandemic, the focus was on restorative approaches, such as the furlough scheme, which gave people the financial support they needed in order not to go into work and risk spreading the disease. The rules back then did not carry quite the same undertones of punitive sanctions for non–compliance as now. Instead, they focused on togetherness.

While most people will probably comply with the new rules, they may be doing so for fear of reprisal rather than a sense of collective moral obligation to wider society. This makes their compliance more fragile because it doesn’t trigger a desire to cooperate. In these circumstances, we are more sensitive to others not complying with the rules.

People who feel restricted by the rules may be encouraged to break them, lash out and protest. This may contribute to widespread demonstrations and civil unrest. Not only do gatherings of this kind negate social distancing but they also contribute to the confusion and fuel the sense that solidarity has been lost.

This is all unfolding against the backdrop of a fragile and uncertain structure. Social norms are being challenged and change by the day – from sudden school closures to local lockdowns and immediate requests to isolate for 14 days. Add to this the fact that the population is exhausted and recovering from the first wave of COVID-19, and it seems reasonable to think that the UK government should reconsider its current approach.