This story could be a classic example of entrepreneurship, one that we see all the time on TV screens, especially in bank advertisements that offer easy credit, but it is much more than that: it contains empowerment, training and, above all, hope. The central character of this story is the Brazilian journalist Mila Moreano, who collaborated with so many others in this time of painful stories, in the art of solidarity and of caring for others.

It all started in 2004, when Mila decided to leave Brazil to take an English course in South Africa. It’s been 16 years and she remains steadfast in this country, making a difference in the lives of hundreds of families in Cape Town.

With solidarity as a practice, she created a school to teach sewing and entrepreneurship to underprivileged women from various South African communities. To transform lives, it was necessary to go well beyond the natural beauty and stunning scenery of the City. She was bothered by inequality, having direct contact with women, who sometimes endured up to two days without a meal, just drinking tea, to keep going.  Mila Moreano, who until then, had only known about hunger through statistics, started to interact with people who did not even know when they would be entitled to a meal. Apart from hunger, these women still lived with sexual abuse and all kinds of domestic violence, and Mila saw empowerment as the antidote to cure or minimize some of these social diseases.

Not knowing where to start, but motivated by the discomfort that the reality of those women caused her, Mila, who was never a specialist in cutting and sewing, had the idea of using two machines that were lying in the garage of her house to start the enterprise. “I started to teach the classes by hand, as I did not have experience in sewing, but I was researching on YouTube and together with them learning the techniques that would make our work easier”, says Mila.

Gradually, production took shape – backpacks, clothes and cooking bags – all made with traditional African fabrics. The women’s natural knowledge and talent were essential. They proved to themselves their own capacity that had been suppressed as they now believed that they were capable of producing sewn products. After a while, the women in the initial class began to share the knowledge acquired in their communities, becoming teachers or professional seamstresses.

The objective of the project then evolved into structured courses and also the training of women in managing a business that they could expand, by creating a clientele in the neighborhood and nearby schools and churches. 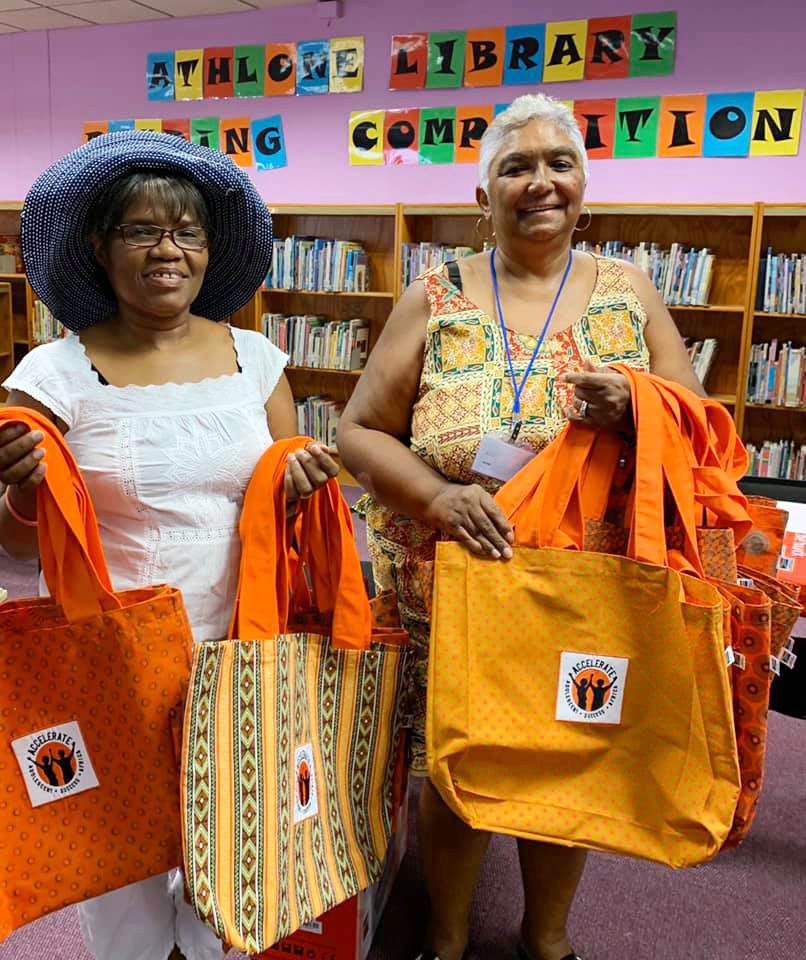 Mila remembers the beginning when all the women were unemployed. Over time, they have ceased to be dependent on their husbands and, in some cases, have become the main providers of their homes in a country such as South Africa, which has one of the highest unemployment rates in the world. All women are encouraged to work from their homes, avoiding the dangers of public transport and dark streets, and, above all, to have their own bank accounts. Many used their husbands’ accounts and the financial result of the work they sold did not always reach their hands. “The big challenge is to make them understand that they need to see themselves as businesswomen”, explains Mila.

Overcoming fear and internal resistance is part of the package embraced by Mila Moreano who takes women to fairs and markets so that they have direct contact with customers and learn to calculate, give change, offer options and advantages and thus have a comprehensive notion of the entire production chain.

The idea of “Yes We Can” has already benefited hundreds of families. Mila’s organization is thus appropriately named Yes We Can! The project has already benefited a few hundred women, in its four years of existence, and has grown without outside investment, all thanks to the good old word of mouth. Today, the teachers trained by the project have business cards and publicity pamphlets and, charge ZAR 100 for 3 hours of class. The value practically covers the costs of the material, but they can either sell the product or simply use it.

Thanks to a partnership with some South African foundations, the project gained a headquarters and started to operate in a container within a complex that was created with the aim of generating small businesses in the Philippi community. To pay lower rent, teachers need to teach 10 women for free every month. There are 15 machines working at full speed on the site and others, which have also been donated, in public libraries in Cape Town. The main seamstresses and teachers earn up to R800 a week, about 200 US dollars a month. The money is usually used to buy food, uniforms for children, and other family expenses. 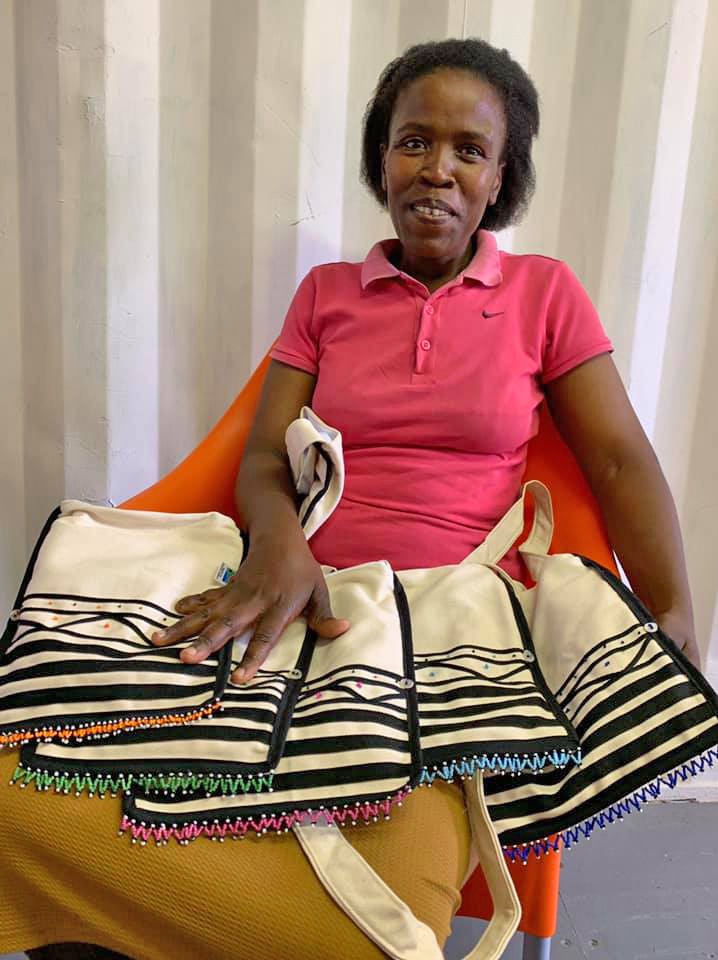 Even as the head of a project that is positively impacting the lives of hundreds of women, Mila Moreano, says she also suffers prejudice. There is a stigma about white women exploiting the cheap black labor that is always hovering in the air. To combat this stigma and keep working, she points out her permanent focus on paying well for production, showing women that they are not working in a company and that the products of the project are not mass produced but rather made one by one to add value to the community. Mila is keen to make it clear that she plays a coordinating role and is not a “boss”. All the production belongs to the project and despite informality, it has a really strong future and the idea of transforming it into an NPO has matured.

Time is on the side of these women and, with it, they are acquiring the confidence necessary for the evolution of the business. “Black Africans still carry the idea that every white person has money. Because of South Africa’s past, there is not much confidence and people are always trying to outwit each other. The world is turning into a jungle and every week in our meetings we address these delicate issues and that’s how we are gaining more confidence in each other”, explains Mila.

She also tries to make it clear to the women who are part of the project, that this is not charity, but empowerment and training of labor. In the future, she intends to transform this work into a sustainable source of income for herself and everyone involved in the production process.

To survive, the Brazilian journalist’s main source of income is the rental of a property for tourists and, even so, she still applies part of her dividends to the project. In a brief reflection, Mila believes that she is empowering herself a lot more, as all the work becomes empowerment while in the meantime turning into food, clothes, shoes and more.

The lessons are many and frequent for this 47-year-old Brazilian, born in Rio de Janeiro and raised in the city of Paty do Alferes, in the interior of the state. A journalism graduate, Mila Moreano worked in TV newsrooms and radio stations in Brazil. But, it was when she started her postgraduate studies in Teaching, specializing in Adult Education, at the University of Cape Town and decided to set up her research site in the Samora Machel community in Philippi, one of the most dangerous regions in Cape Town, that the transformation began.

“In the beginning,” says Mila modestly, “I taught English in a small house made of corrugated iron, in a country where there are 11 official languages and not all low-income people are fluent in English. From classes came needlework and sewing, empowerment, training, and hope. Yes, we can. Or, “Yes, we can” if you prefer”. 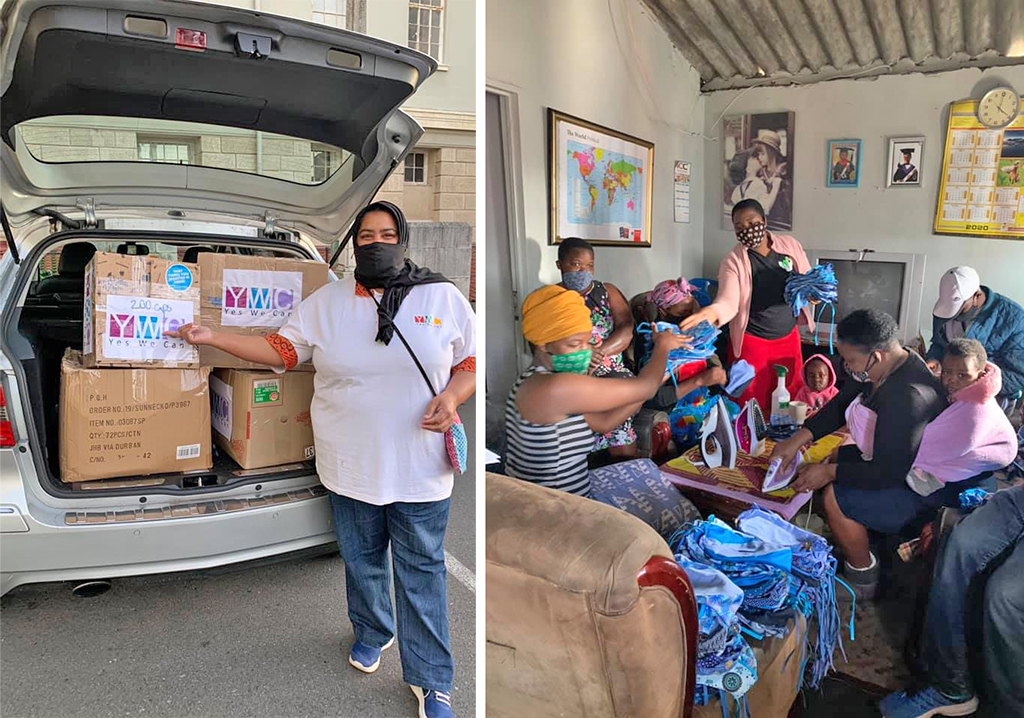 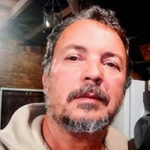