Mustafa Akinci is the President of the Republic of Northern Cyprus, that is, the northern part of the Mediterranean island, recognized only by Turkey. Akinci has been leading the country since 2015 and is preparing for his second reelection in the upcoming elections. Akinci belongs to the Democracy Party of Communities (TDP). Ex-mayor of Nicosia, the capital city divided into two parts, he is also one of the promoters and founders of the Movement for Democracy and Peace, being also committed to the unification of the island.

Akinci gave a long video interview to Euronews in which he spoke about hot topics like that concerning energy policies in the eastern Mediterranean, which increase the possibility of conflicts and clashes, but also about the complicated relationship between his republic and the Ankara government.

“After the discovery of gas fields in the eastern Mediterranean, the tension has increased. There is a need to build the possibility of dialogue between the neighbouring countries. The population of Northern Cyprus cannot be excluded from the agreements made concerning energy policies.Turkey has weak and conflicting relations with various Mediterranean countries which do not help to normalize the situation: this needs to be fixed. It is necessary to declare a kind of moratorium in order to resolve the historical problems of the area. The natural resources of the area belong to all the countries: this should be accepted by all. France is a country which has weight in the area, but must collaborate with everyone: it should not take initiatives alone or only with some countries. The relations between the European Union and Ankara must be improved and must be based on a democratic culture: I personally hold to this. The current energy projects are not sustainable from an economic point of view: even the Greek experts say so. A solution to the Cypriot conflict will make the area more stable: all the leaders must apply themselves to making this possible. We do not have complete recognition even on the part of Turkey: quite simply, a Turkish football team cannot play against one of our teams. So a united Cyprus is an advantage also for Ankara. In Turkey there are people who want to maintain the precariousness of our status for a number of their own advantages. I have seen and lived war: it serves no purpose and should not be our destiny. Arms traffickers want there to be permanent conflict in this area. We need a new future. Citizens, politicians and the media have a great responsibility to sustain the culture of peace. No country can be excluded and think it can be isolated from the rest of the world, especially in this historical era.”

Translation by Jeannette A. Arduino from the voluntary Pressenza translation team. We are looking for volunteers! 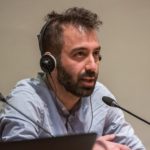 Murat Cinar
One of the sons of Constantine, was born in 1981. Fruit of love of an immigrant couple in the former Ottoman city, she from Sebastia (Turkey) he from Batum (Georgia). Raised two steps away from the old Pera, between the Armenian and Jewish cultures. Big passion for photography, cinema, politics and inevitably journalism. After a short academic adventure in International Finance he landed in Italy back in 2001, first in Siena then in Turin, with the desire to study journalism, but he ended up attending Cinema and Television. He specializes in shooting and editing videos, photography and, lately, web marketing. Occasionally he writes in Turkey for the national magazine KaosGL, for the national daily Birgun and for various independent news portals such as Bianet and Sendika. In Italy he wrote for Il Manifesto and the monthly E-il mensile. He is one of the founders of the Glob011 monthly freepress, he worked for BabelMed and Prospettive Altre. Currently has collaborations with Pressenza and Caffè dei Giornalisti. As long as he can get a little oxygen out of the city and a few hours free from work, he tries to write stories, frequenrly ironic ones, taken from what he observes and experiences. He tries to enrich his journey with Shiatsu, TaiChi and the passion for Fenerbahçe.