Police in Belarus have rounded up dozens of women at a protest against embattled President Alexander Lukashenko. The authoritarian leader riled his opponents further this week by holding a secret swearing-in ceremony.

Hundreds of women joined a protest in the Belarusian capital, Minsk, on Saturday to renew calls for President Alexander Lukashenko to step down.

Police arrested more than 80 demonstrators, as well as some journalists, according to the Viasna human rights organization. Rallies were also taking place in other cities.

Video footage of the march showed a heavy police presence with officers carrying women by their hands and feet to buses. 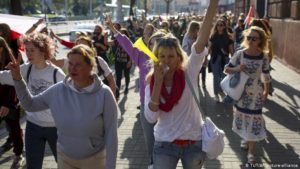 Hundreds of thousands of Belarusians have been protesting since early August

Demonstrations drawing hundreds of thousands of people have rocked Belarus since August 9 when Lukashenko claimed a landslide victory in elections that the opposition and Western governments say was rigged.

Lukashenko has rejected allegations of vote manipulation, and instead blames the unrest in Belarus on foreign interference.