Dear friends, we invite you to the

Methodology of the Meeting:

This invitation is being sent to the following networks: Agora of the Earth’s Inhabitants, Francis and Claire’s Economy, Viral Open Space, Dialogues for Humanity, Convivialists, World Social Forum – Transforming Economies, the Humanist Movement, the Global Ecovillage Network, the Earth Charter Network and new networks that are coming.

We are waiting for you there!  Warm regards, in solidarity, 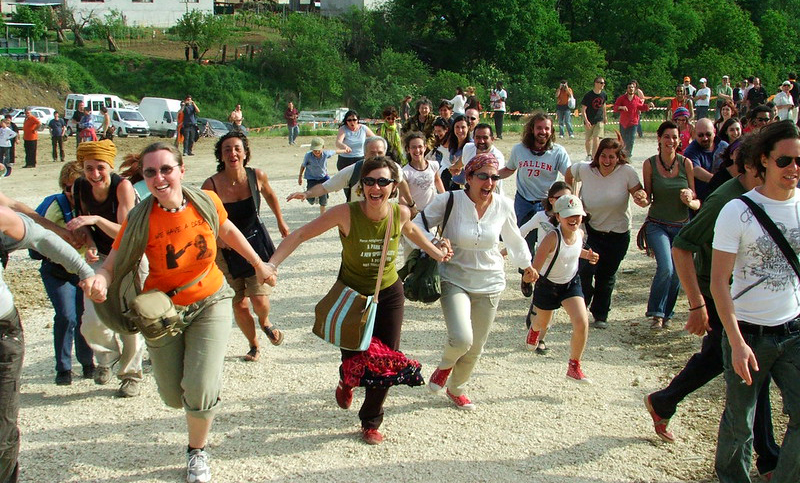 The nine global networks who now get in touch are from North and the South, with roots in a large number of countries and, therefore, they work daily in the convergence of languages, cultures and worldviews. Below are their main ideas, and links to their web pages for a first look at their view of the current world, its challenges and proposals.

The Dialogue in Humanity network was born in 2002 in Lyon (France), where an annual festival of citizenship aims to put the human question into public debate by helping each person to grow in their humanity through innovative experiences. The Open Heart Dialogues, in a circle, with the franchise word around visceral themes have spread around the world since 2009.

The Humanist Movement was born in Mendoza, Argentina, in 1969, based on the proposals of Silo (Mario Luis Rodríguez Cobos) who brought people together around these pillars: the human being as a central value, non-violence, non-discrimination and simultaneous personal and social transformation. The movement spread throughout South America and with the exile of people persecuted by local dictatorships, it reaches 51 countries today. Its doctrinal bases can be found at silo.net

The Convivialism International was born in Paris from the articulation of intellectuals from different parts of the world who launched in 2010 the Coexistence manifesto, a new approach to political philosophy. The art of living together, even if in opposition, is also the subject of the second Manifesto, published in 2020 and signed by almost 300 personalities from 33 countries, postulating a post-neoliberal capitalist world.

The Global Ecovillage Network GEN is a growing network of regenerative communities and initiatives, founded in 1995, and with consultative status to UN ECOSOC and UNEP. Comprising five continental networks and a youth arm, and reaching out to 6090 communities, in 114 countries, GEN builds bridges between policy-makers, governments, NGOs, academics, entrepreneurs, activists, community networks and ecologically-minded individuals across the globe in order to develop strategies for a global transition to resilient communities and cultures. For 25 years, GEN has supported communities to develop in a regenerative way – not only living sustainably but actively contributing to restore our ecosystems and social relations.

The Agora of the Earth’s Inhabitants was created in Verona, Italy, in 2018, to contribute to the process of building humanity beyond the borders of states. The Sezano Letter launches its foundations and objectives, followed recently by a Manifesto, “From Preaching to the Safeguarding of Life”, and a Declaration defending vaccines and medicines against Covid-19 that are public, free and accessible to all, that is, that are RECOGNISED as common assets in defense of life. The AHT also postulates making poverty illegal, a global policy of water protection and a radical transformation of the international financial architecture.

The Movement for an Economy of Francis and Clare was born of the initiative of Pope Francis to invite humanity to a profound transformation of the relationship between human beings and between them and life and the whole of Nature. In the encyclical Laudato Sì Francisco launches the expression “integral ecology” and points out that there will be no future for life on the Planet without a radical transformation of human relations in the economic and environmental field. He takes the example of Francis of Assisi to call upon humanity to realm, especially the youth of the world, to collaborate in the building up of an economy centred on life, social and environmental justice, and good living for all.

The Earth Charter is a movement that started in 1987 and became, between 1994 and 2000, a process of co-elaborating a declaration of fundamental ethical principles for the construction of a just, sustainable and peaceful global society. The Charter and its support movement seek to inspire all peoples to a new sense of global interdependence and shared responsibility, aimed at the well-being of the entire human family, the great community of life and future generations.

The WSF Transforming Economies created within the dynamics of the World Social Forums is a process of virtual and face-to-face confluence of the different movements of the alternative economy at the local and international level. Its objective is to connect those who are practicing another economy, bringing social movements and initiatives that share the desire to place people and the environment at the center of the economy. In this process, they seek to move towards resilient and collaborative societies that build and strengthen strategic alliances and actions based on working together in search of Well Being.