UK, Switzerland, Luxembourg and the Netherlands – the “axis of tax avoidance” – are responsible for 72 per cent of global tax losses

The Tax Justice Network, which previously warned governments they “cannot build back better on top of a tax haven trap door”3, is calling on governments to tackle the problem by requiring firms to publish their individual country by country reports each year, and then taxing them according to where the reports show profits are generated before they are shifted into tax havens. But for now, yesterday’s OECD publication represents the biggest single step taken towards international corporate tax transparency.

The scale of corporate tax abuse

The analysis reveals that instead of declaring profits in the countries where they were generated, multinational firms operating around the world are shifting over $1 trillion in profits every year to corporate tax havens, where corporate tax rates in practice are far lower or non-existent, in order to underreport their profits where they operate and consequently pay billions less in tax each year.4

The partial picture provided by data from the 15 countries that report at a sufficiently high degree of granularity allows the Tax Justice Network to identify $467 billion worth of profit shifted across the world and $117 billion in corporate tax lost around the world annually. With higher quality US data for 2017 for comparison, the Tax Justice Network estimates that actual profit shifting is approximately 50 per cent higher than reported by the 15 countries, around $840bn, with direct corporate tax losses of $203bn. Extrapolating to the global picture indicates total profit shifting of $1.3 trillion each year, and direct corporate tax losses of $330bn. Coupled with indirect effects from the race to the bottom in corporate income tax rates, the overall annual losses imposed by multinational companies’ use of tax havens is likely in line with or in excess of the Tax Justice Network’s estimate of $500bn, based on a methodology created by researchers at the International Monetary Fund. 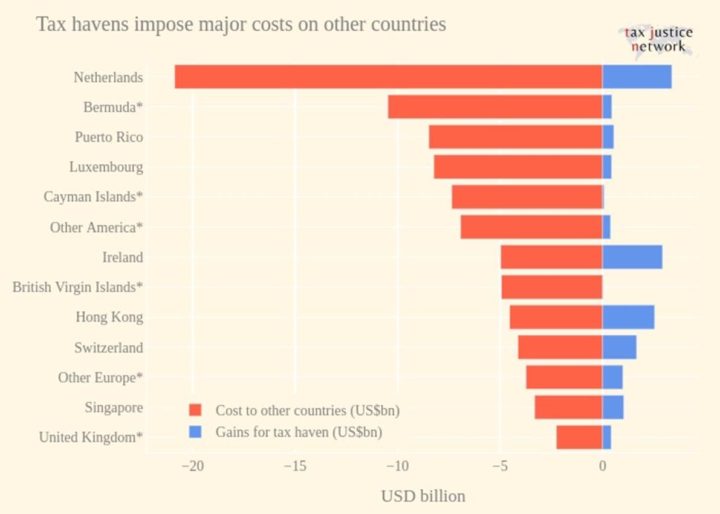 Tax revenue losses and gains due to profit shifting by the displayed countries. UK territories and Crown dependencies are marked with an asterisk

In 2019, the Tax Justice Network’s Corporate Tax Haven Index estimated, based on deep analysis of countries tax laws, financial systems and economies, that the UK, Netherlands, Switzerland and Luxembourg – dubbed the “axis of tax avoidance” – are together responsible for half of the world’s corporate tax avoidance risks.5 Analysis of the new OECD data finds that this “axis of avoidance” is responsible for 72 per cent of the corporate tax loss revealed in the data.

Country by country data published by OECD is a “landmark moment”

The Tax Justice Network is welcoming the OECD commitment to publishing the data as a “landmark moment” in the fight against corporate tax abuse. Developed by the Tax Justice Network in 2003, country by country reporting eventually gained backing from the G20 in 2013 and was formalised by the OECD in 2015, making it a requirement for OECD members to collect country by country reporting data with a later commitment to publish the data in aggregated format in 2019 – subsequently delayed to yesterday.

The Tax Justice Network analysed the US’s country by country reporting data in April to reveal that US firms alone were shifting $115 billion in profit into the UK, Switzerland, Luxembourg and the Netherlands, costing the EU over $27 billion in lost corporate tax.6 Using the new country by country reporting data from 15 countries provides a bigger picture of corporate tax abuse – but comprehensive data is needed to reveal the complete picture.

The Tax Justice Network’s analysis confirms that measures taken recently by EU countries to stop Covid-19 bailouts from ending up in tax havens will be largely ineffective at tackling profit shifting. Recognising that measures to tackle the economic fallout of the Covid-19 pandemic are undermined by corporate tax havens, several EU countries banned companies registered in tax havens from receiving bailouts in the spring. However, the ban only extended to countries blacklisted on the EU’s list of non-cooperative jurisdictions, which leaves out almost all of the world’s most dangerous tax havens. The Tax Justice Network had previously warned that the EU’s tax haven blacklist covers just 7 per cent of financial secrecy risks posed by tax havens, leaving the door wide open to tax abuse.7 Analysis of the new OECD data confirms that jurisdictions on the EU tax haven black list are responsible for at least 7 per cent of the profit shifting revealed, with British Territory Cayman the only significant player on the list, accounting for 98 per cent of that.

The UK has blocked the OECD from publishing its aggregated country by country data, reneging on its 2016 commitment to do so. Under then-Chancellor George Osborne, who lobbied the EU to commit to publishing country by country reporting, the UK Treasury was among the first to commit to publishing country by country reporting data both at a national level and at an international level as part of a multilateral process. However, in May 2020, the UK Treasury confirmed to parliament its reversal on the commitments, prompting the Tax Justice Network to raise the alarm on the UK’s regression into tax havenry.10

Under the Finance Act 2016, the UK government has had the power to require multinational firms based in the UK to publish their country by country reporting data; however, the UK government has yet to exercise the power. While the UK has collected the data since 2016, the UK Treasury said in May 2020 that it would not publish the data as doing so would be in violation of the OECD process – the same process under which the OECD yesterday published aggregate data, but in which the UK refused to participate.

By not exercising the power to require individual firms to publish their country by country reporting under the Finance Act 2016, the UK is estimated to have missed out on at least £2.5 billion in corporate tax a year, amounting to at least £10 billion today.11 An extra £10 billion is exactly how much NHS England Chief Simon Stevens has recently said is needed to prepare the country’s National Health Service for a potential second coronavirus wave.12

A striking feature of the OECD data release is just how many countries have failed to disclose to the agreed template for aggregate reporting. Many OECD members failed to allow any data at all to be published, like the UK. Many others restricted the disaggregation to the extent that their data is effectively useless to understand the profit shifting patterns of multinational firms headquartered in their jurisdictions. 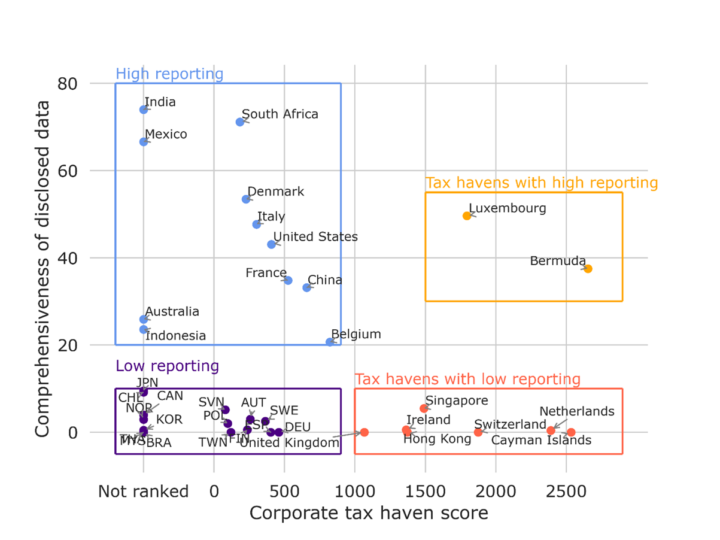 Campaigners call on governments to publish details on multinational firms

A number of corporate groups have already committed to voluntarily publishing their country by country reporting data, with Vodafone being among the first to do so in 2018. Global standard-setter GRI launched the GRI Tax Standard in December 2019, establishing the most comprehensive standard for multinationals to publish their country by country reporting data under.13 GRI standards are practiced by 74 per cent of the world’s 250 largest corporations.14

“The coronavirus pandemic has exposed the grave costs of an international tax system programmed to prioritise the interest of corporate giants over the needs of people. This new data confirms that corporate tax havens like the UK, Switzerland, the Netherlands and Luxembourg have been fuelling a race to the bottom for years, allowing the biggest corporations to syphon wealth and power away from the nurses, public services and local businesses we’re all relying on today.

“This is the greatest, longest running robbery of our times, but the good news is we’ve now got one of the best alarm systems in place – we just need governments to switch it on.”

“Now more than ever, governments must reprogramme their tax systems to prioritise people’s wellbeing over the interests of the biggest corporations. That starts with transparency. The new data published by the OECD is a landmark moment in bringing transparency to the tax affairs of the world’s largest multinational firms in aggregate. To truly tackle the billions in corporate tax abuse committed each year, governments must require firms to publish their individual country by country reports each year – and then tax them according to where they actually make profit, not where they pretend to.”

“These data confirm the scale of profit shifting by multinational companies, and the cost to public revenues. This is a direct contributing factor to the shocking underfunding of our public services, which the COVID-19 pandemic has fully exposed. Policymakers must act urgently to stem these losses and support public services – we can’t afford to wait.”

“The irony of the OECD – the club of rich countries – publishing data that shows the tax abuse of their members’ largest multinational companies should be lost on no one. This is an organisation that has illegitimately usurped the role of reforming international tax rules and unsurprisingly failed to deliver on its promise to reform the tax rules that are responsible, and all the while it is non-member countries from the Global South and their citizens who suffer the worst effects. It could not be clearer that the responsibility for international tax rules must shift to the UN – just as quickly as profits are shifted to tax havens including leading OECD member states.”

About the Tax Justice Network

The Tax Justice Network believes a fair world, where everyone has the opportunities to lead a meaningful and fulfilling life, can only be built on a fair code of tax, where we each pitch in our fair share for the society we all want. Our tax systems, gripped by powerful corporations, have been programmed to ask the least from the corporations and wealthy elites who extract the most from society, and to ask for more from the public for a lot less in return. The Tax Justice Network is fighting to repair this injustice. Every day, we equip people and governments everywhere with the information and tools they need to reprogramme their tax and financial systems to work for everyone.