One part of widespread measures to prevent the spread of COVID-19 has been the temporary closure of schools. In the UK, they have been closed since March, but the government has recently announced plans for the phased reopening of schools in England from June 1. This has prompted fierce criticism from some local authorities, teaching unions and headteachers, and led the devolved governments in Scotland, Wales and Northern Ireland to take different approaches.

Among the government’s arguments for reopening schools is the safeguarding of “vulnerable” children, its concern being that while vulnerable children are at home they are at greater risk of child abuse or neglect. If they are away from school, the argument goes, there is little or no opportunity for school staff to detect abuse and intervene to try to protect them.

The paradox of being at home

Some increase could be anticipated, given vulnerable children are now spending more time with their parents, and parents are responsible for a substantial proportion of child maltreatment. The risk may be greater still as parents are under additional stress, and those parents with their own issues may now not be receiving the specialist psychological or social support they need. Additionally, children will almost inevitably be spending more time on the internet, which may increase their risk of experiencing online bullying and sexual exploitation.

However, although parents may face new pressures, it may also be that others have lessened, with the result that they are less stressed and more able to care for their children. For example, they may not be commuting or caring for their own parents. If there are two parents at home, they can share childcare and other responsibilities.

While less stressed parents may lead to less abuse and neglect, child sexual abuse specifically will be likely to occur less frequently. This takes place often at or around the family home, and requires secrecy. With more people now at home, children will be under greater supervision so opportunities to get vulnerable children alone will be significantly reduced.

Schools have problems too

We must also recognise that schools, in contrast to the implication of the government’s argument for their reopening, are not always safe places for children. The Crime Survey for England and Wales found that 17% of children aged 11-15 years had been bullied. Children that are already vulnerable are significantly more likely to experience bullying, meaning that, ironically, they may be safer spending more time at home.

Of course children are also at risk of abuse from other children and from the adults supposed to be caring for them, not only in schools but in other places such as youth clubs, sports organisations and religious institutions – all of which are currently closed. There is anecdotal evidence that other forms of child victimisation, such as “county lines” exploitation by gangs and street crime has declined during the pandemic. 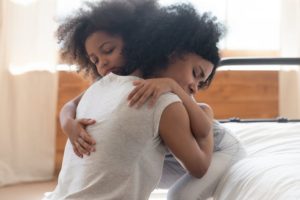 Adults face problems too, and lockdown may have reduced their stress levels.

While evidence of greater risk of child abuse during the lockdown is equivocal, the other major social issue it brings into focus – domestic violence – is more stark. Women who live with abusers are now much more vulnerable. The National Domestic Abuse Helpline’s website has seen an 156% increase in traffic, while the Metropolitan Police has issued 24% more charges and cautions for domestic abuse during the lockdown period. The Victims’ Commissioner for England and Wales has warned of a “tsunami” of domestic abuse reports to the police when the lockdown ends.

Domestic abuse among partners also represents a severe threat to children in the family: an estimated one in seven (14%) under the age of 18 “will have lived with domestic violence at some point in their childhood”. Witnessing such violence can have devastating impacts upon children’s psychosocial development.

The extensive and serious potential risks and actual harms women and vulnerable children face cannot be overstated. But the evidence shows that the argument for reopening schools based on child abuse is simplistic, and such a line of thinking will not help us if it persists after lockdown ends.

Beyond the current crisis, two questions are still unaddressed: if we accept that vulnerable children are safe, or safer, at school, what happens to them outside the school day, during evenings and weekends? And, if children’s home lives are indeed such high-risk places, why do the authorities and society more widely allow vulnerable children to remain with their families? To truly offer children protection we need to answer these awkward questions rather than seek to sweep them under the carpet.