Money is a convention.

It’s an agreement that, until recently, was linked to the physical presence of a wealth made of a material, gold. A myth.

Today this wealth is fictitious, more theoretical than real. It is a wealth linked to debt, to the power of men over other men. This is money in the neoliberal system. Another myth.

Money is a random and theoretical convention linked to a myth of arbitrary power. They’re not even paper anymore, they’ve become bits. Their physicality is disappearing, they are dematerializing like many other things in the digital age.

Are we all slaves to theoretical bits greedily managed in the technologically advanced world?

This economic crisis has to be paid for by financial power. You financiers have to pay for it, you CEOs of perpetually hungry holdings looking for companies to shred in their sharp teeth, you unscrupulous bankers, you cynical gamblers of “multiply bit money without producing anything”, you owners of giant companies that steal free data and sell it at a cost to those who want to influence and manipulate people’s opinions. Not the real economy, not production, not trade, not services, not people who work or look for work.

The fun is over for you too. Politics, if it wakes up and gets free, will have to pass the bills of this crisis on to you.

You will have to create the money you need now to feed the people. The money that will enable countries to rebuild their health care systems. The money to enable them to convert production and make it sustainable, for the environment and for social justice.

Won’t the accounts go back to that? Will you have gained nothing from this splendid global crisis? You who always find ways to make money out of tragedies.

This time you will lose.

Print the money you need, or rather, just make the numbers appear in people’s accounts. It’s not difficult technically, it’s a decision.

But… if you give out money without wanting to pay it back with interest… afterwards, how can you explain that it was temporary, that there’s no money for this and that?

This time you’re not going back to normal. You change the paradigm.

This time you will have to repay the misery you created with your ignoble way of calculating the monetary value of everything from birth to death of a human being.

Translation from Italian by Francesco Alimena 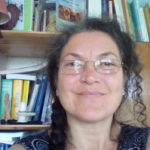