The aroma of firewood envelops La Pampa, as it has, on occasions, a thousand years. After ascending with harvests from the sea to barter with inland peoples, the Changos lit fires to smoke fish and dry sea lion skins. Climbing up the narrow path to reach the Huantajaya silver mine in the 15th century, the Incas would restore their energy by the hearth. Later, Chileans who treaded the uphill winding road, with mules and carts to load with nitrate, would warm themselves around bonfires upon reaching the plateau.

Since the 19th century, this broad expanse of arid land, 700 meters above the Pacific Ocean, with the Coastal Mountain Range more than a thousand meters in height as backdrop, has been known as Alto Hospicio, place to alleviate fatigue.

This afternoon, the smoke rises from firewood, over which an immense pot rests on a grill. This is Comedor Mink’a (Mink’a Kitchen) that serves 270 people (8100 meals monthly) of Toma La Dignidad, a seven-hectare corner, home to 700 families within the immense Toma Tercera Esperanza, a sector known as La Pampa, in the municipality of Alto Hospicio. Along the horizon, above the site of a former garbage dump, flanking the hills, another 4000 families live in 40 hectares of constructions patched together from wood, cardboard, plastic sheeting, that at times blends with the ochre of the desert.

In 2004 Alto Hospicio became an incorporated municipality, independent of Iquique, after its population multiplied rapidly due to land occupations – “tomas”, in Chilean lingo – that began in the last years of dictatorship. The land occupations and subsequent shantytowns (known as “campamentos”) continued to unfurl throughout the country and in Alto Hospicio, in particular, becoming massive in the 1990s post dictatorship, when government policy continued to fall short of offering adequate solutions for the lack of dignified housing. Extreme poverty in Alto Hospicio is a reality for 25% of its population of 100,000.

Studies from 2019 concluded that the campamentos are on the rise, with more than 47.000 people living in 800 encampments along the entire diverse geography of Chile. A Housing Ministry study shows that between 2011 and 2019 the number of families who live in encampments in the northern province of Tarapacá, where the municipalities of Iquique and Alto Hospicio are located, quadrupled However, the government has not translated this conclusion into more substantial public housing programs to change this situation.

Toma la Dignidad exemplifies the challenges many shantytowns of Chile face today, associated with the world health emergency of the new coronavirus.

The absence of an effective governmental response fostered the emergence of two community organizations and the kitchen itself. In February arose Comedor Mink’a, founded by Enrique Solís, with support from the Citizen Solidarity Committee of Tarapacá and the Dignity Brigade. The two organizations channel cooperation from universities, human rights activists, and other citizens, to supply Comedor Mink’a and to respond to other needs of the people who live in the encampment.

Rosario Barbosa stirs the immense pot while another five women help in the improvised kitchen set up in the front yard of Enrique Solís, who coordinates Comedor Mink’a. Today’s menu offers lentils and rice; next week, perhaps spaghetti, or chicken stew, depending on donations obtained by the two organizations. On May 15 the kitchen received 460 kilos of seabass, a donation from Arturo Prats University. The Iquique Rotary Club, a few schools, and individuals also have contributed.

The water to prepare the meals is brought by a tank truck from a water distribution company that charges them to fill a 1000-liter barrel – that lasts them two days – as well as the neighbors’ small containers. Even though the water has sediment and is suspected to be the cause of diarrhea among some children, people drink it just the same.

Rosario, who is 40 years old and is mother of two children, has spent five years in Toma la Dignidad. The first two years she lived without electricity or water, and in 2016 endured the violent police eviction from the encampment, but the presence of Covid-19 has been “quite hard”, she says. “Before, I sold food along the beach, and when summer ended I would sell to construction firms and schools. But now I can’t go out. As an adult, I can hold up not eating, but my son cannot. To survive I support the kitchen, Not only for my but for all the families here.” 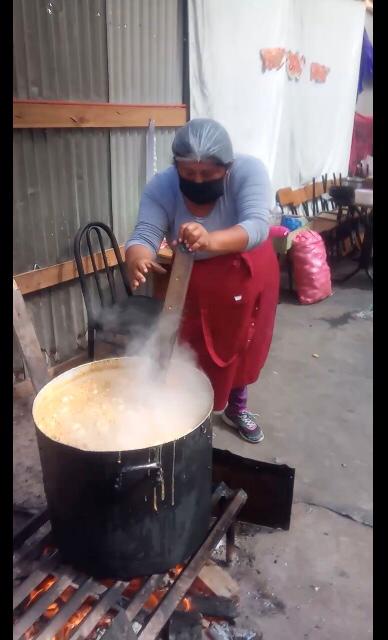 In the kitchen with Rosario is Luisa Fernanda Molina, 23, who is five months pregnant. She washes the dishes, cleans up the area, and helps hand out the food. Since her partner abandoned her, she has had to fend for herself. When Alisa could no longer pay the rent, so she came to the Toma. Alisa is a nurse, trained in her native Colombia, and provides first aid. “My dream is to have my baby in Chile, thrive, and exercise my profession to help Chileans,” she affirms.

Luisa says the Red Cross came to take the neighbors’ blood pressure and explained how to protect themselves from the new virus, but she has not seen government officials. “Knowing that at any given moment we can become infected, each of us has to take care of ourselves,” adds Rosario.

Adjacent to the Toma la Dignidad are construction sites: public housing units, and farther to the west the hospital, that prompted the eviction four years ago. Many heads of household held construction Jobs, until the construction firms began to close or declare bankruptcy, as a result of the pandemic.

In addition to those employed by the construction industry, another segment were street vendors, while others had formal jobs in a house, a business or a mine. The majority lost their jobs. “Every week the kitchen increased exponentially by another 20 servings,” says Victoria Espinoza Guzmán, 29, coordinator of the Dignity Brigade, and also known as “Profe” for the adult education classes she taught last year.

“Ever since the social protest movement and, even more so, with the pandemic, the population of this toma has grown rapidly,” explains Victoria. “Before, people needed a recommendation and had to register to join this toma. Now, basically, a family shows up and they see where to put them.”

Victoria Espinoza knows first-hand what it means to live in want in this inhospitable place. In 1998 she arrived with her parents and sister to live in one of the first houses assigned as public housing. Alto Hospicio was practically vacant, with some farms, a garbage dump and Army property. From her father and mother she acquired the habit of solidarity. “You grow up in the context of giving others a hand, of organizing community projects, to somehow lessen the dependency on an invisible state.”

Outside the kitchen, neighbors with masks on their faces, line up with pots and other containers in hand to receive the lunch for their families. Someone passes alcohol-based hand gel and reminds them to keep a distance, a complex if not alien concept for those who live crowded in a hut.

Not far away, where condors once soared, adventurers float through the air in paragliders, for a price ($50.000 CLP; U.S.$61), equivalent to the average biweekly earnings of a resident of Toma la Dignidad.

All the above occurred before May 15. On that date, 1886 new cases of Covid-19 arose in Chile in the previous 24 hours, bringing the total to more than 41.400 in all the country. In Tarapacá province 306 new cases were reported in Iquique and 186 more in Alto Hospicio. Complete quarantine was imposed on the Santiago region and in Tarapacá. At Toma la Dignidad, a neighbor near the kitchen tested positive, prompting several kitchen volunteers to shelter in place.

The government’s announcement of 2.5 million boxes of groceries as its national mitigation plan was small comfort for those who face another winter submerged in the camanchaca, the dense fog that intensifies the cold. What they can count on is the solidarity of their own neighbors and other citizens, a spirit that arises in difficult times among marginalized communities of Chile.

However, Carolina Vargas Bruna, professor at Arturo Prat University and Committee member, believes citizen solidarity does not suffice to address the spectrum of interconnected needs that affect people of the Toma. “We insist on the legitimacy of these human rights that are the government’s responsibility to provide: work, education, health, and dignified housing. We hold the State and the municipal governments accountable for keeping a vast part of our population marginalized, not just now with Covid-19 but a systemic precarity that was installed decades ago.”

*With important collaboration by Rita Villacorta and Victoria Hinojosa Sánchez.