Julian Assange’s fiancée (and children) revealed for the first time

In this video originally published on the WikiLeaks channel, Julian Assange’s fiancée and children appear for the first time on the one year anniversary of his arrest inside Ecuador’s London embassy. Lawyer Stella Morris, 37, met the WikiLeaks founder while working to prevent his extradition to the United States. The couple has two young children together and have been engaged since 2017. In an emotional interview, Morris reveals her relationship with Assange and how his imprisonment has impacted her life.

To read the transcript of this video: Julian Assange’s fiancée (and children) interviewed for the first time 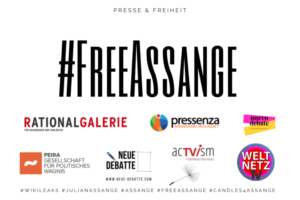 acTVism Munich
acTVism Munich is an independent and non-profit global online media network that broadcasts regularly from Munich. Our goal is to surface those issues that are neglected by mainstream media through investigative journalism while remaining as objective as possible. In addition, to attain this goal, acTVism Munich lays great emphasis on arts and culture. To stay in line with this philosophy, we finance ourselves solely through people’s donations. We do not accept any advertisements, governmental or corporate financing. www.actvism.org/en/