The importance of treating migrants with dignity and respect has not changed, UN migration agency (IOM), spokesperson Joel Millman has told UN News, adding that the impact the COVID-19 pandemic is having on migrants, highly represented in the food industry, which is now seeing widespread shutdowns, is ‘a huge concern’ to the agency.

“We define migrants as workers, as displaced people, as asylum seekers, and they are a huge presence across the world, for all kinds of reasons. And of course, they are human beings: they’re our neighbours, our families, they are people that our children know from school, and they’re affected the way all of us are affected by this during this public health emergency.

At IOM, we think that the most important message – of treating people with dignity and full respect for their human rights – doesn’t change under these circumstances”.

“When I travel, I notice that migrants crossing Europe, across North America, and more and more in South America, Africa and Asia, have come to dominate certain sectors of the economy. Food preparation, of course, is probably the most obvious, but also the care of the elderly, hospital workers, janitors, and construction workers.

All these industries, and more, are becoming dominated by foreigners and, if countries and cities are encouraging people to stay home, and not go to bars or restaurants, not to congregate in theatres, or attend sporting events, there will be a huge impact on the ability of migrant workers to send money home, and to earn money that’s essential for their families and for the societies that they’ve left.

I was in Bilbao, Spain, over the weekend, and I couldn’t believe it: nothing was open. And if you tried to stay outside, you were encouraged to go home. What is this doing for the workforce in a city that depends on tourism to survive?”

‘Societies are healthier if everybody’s healthier’ 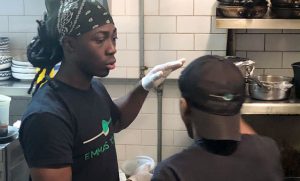 “We’ve said over many years that we want people to have access to public health: societies are healthier if everybody’s healthier. If a migrant could possibly be spreading a contagious disease, you would want that person to have access to your doctors and your examiners and your medical professionals, who can tell whether or not this person is a danger to themselves or to his neighbours. And that doesn’t change.

We worry that this particular pandemic, as has happened before, is being associated with being something foreign, that it’s come from travellers, or from people that are from far away. We’ve seen this with AIDS and tuberculosis in decades past.

We caution against feeding that fear. It doesn’t just demonise migrants, it puts your own people at risk, because if you are frightening people, if they are afraid that something bad will happen to them if they go to the hospital, then they’ll never get checked. Everyone is worse off when that happens.

This is no different than any other health emergency, in the sense that, for the good of society, everybody, even people from abroad, have to have access to your institutions that are there to protect the public health”.

“Regarding migration from Africa to Europe via the Mediterranean, these numbers have dropped sharply over the last two to three years, and we don’t see a sudden change as a result of the pandemic: people aren’t less likely to migrate because of this pandemic, and they’re not more likely to be running away from Africa because of this pandemic. Nothing in our numbers shows that. It’s early days, but we’re not seeing any link right now to coronavirus in migration specifically.

However, because Iran has been has been hit so hard by this pandemic, Afghans who have been living in Iran (a population of millions of people who have been there for many decades) are starting to return to Afghanistan in really high numbers, with around 9,000 a day at certain border points.

IOM is directly involved with the health ministries in those countries, and the World Health Organization, to monitor border flows, and to assist where we can. We’re doing it with messaging, with data collection, and all kinds of things that are specific to that emergency at that border crossing. And I suspect we’ll be doing a lot more of that in the days to come, in various different countries”.

The effect of border closures onforeigners

“We have a clear policy on borders and border closures. Countries not only have the right to decide their own border policies, but they also have an obligation to their own people and to the greater global community to monitor borders carefully.

We think it’s good for countries to be able to know who is coming in, and to be able to inspect them. However, when you close a border, you have to face the consequence that some people are going to turn to criminal groups to try to circumvent these closures, and come in through unofficial ports or unofficial border crossings where they can’t be inspected.

This is particularly dangerous in a public health emergency, because if you’re coming in with the help of a criminal group, nobody is able to check your health conditions or your documents, or know where you’re coming from, the way you can when borders are open, and transit is regular.

This is not a new thing: there is always a balance of interests between public health and public security, and humanitarian gestures and the free transit of people in a global economy.

In these early days, we don’t know which practices are going to work best. Countries have an obligation to protect their borders carefully and take very seriously those obligations, but our position will always be that the best border security is a transparent border inspection, so that countries have the ability to see who is coming in, and to vet them properly”.

Special measures to protect migrants from the pandemic

“We are taking several measures to protect migrants. An early program we started a few weeks ago involved inspecting cars coming in and out of Mongolia’s capital. I mentioned earlier the work we’re doing with Iran and Afghanistan. We’ve raised money, we’re raising awareness, and we’re collaborating with partners everywhere we can.

We know we’re going to have more calls, like the ones we’ve had from countries seeking our advice and our help, and we expect in the days that it will become clearer which programs most effective and where we can do the most good”.