Palms together in Peace:
It would be our great pleasure to hold a ceremony of peace and host many of Buddhists, Christians, Hindus, Muslims, adherents of other religions, and peace activists as guests. – Rev. Masao Ishitani Sensei, Veeriruppu Village, Sankarankovil, Tamil Nadu, South India 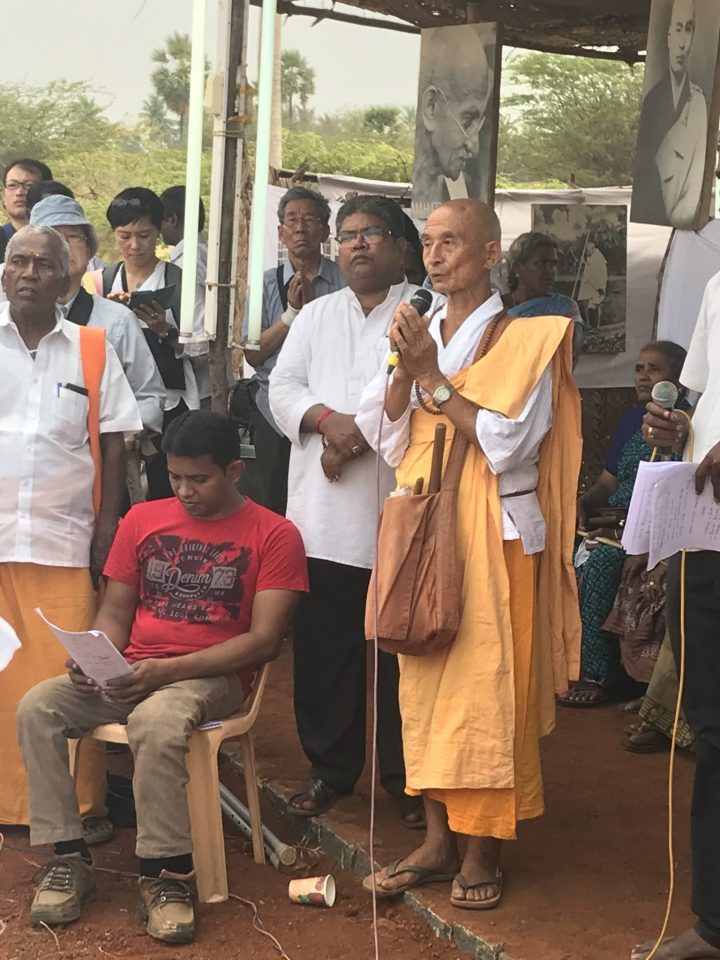 “In the dramatic theater of violence that now affects the whole planet we are witnesses in India in these days of acts of repression, by the Modi government and its BJP party, against religious and ethnic minorities who have brought dozens of victims on the streets of the Indian capital,” as our dear friends Chandra and Max from Italy have shared with us.

Yet there is a counter-movement towards Peace and Reconstruction that is also taking place at the same time. The call is now there for all of us to move towards positive constructive thoughts and actions. As Chandra has said to us, “It is the ideal time to understand and put into practice the teachings of the great masters of Nonviolence (Ahimsa) and allow the various spiritual and political paths to converge towards a single path.”

With this in mind, delegations of Peace-Makers and Spiritual Followers of Buddhism and other religions of peace from all over India, Japan, Thailand, South Korea, Taiwan, Nepal, Tibet, and many other places gathered over four days in South India from March 2-5 for a succession of events culminating in the dedication of the South Indian Peace Pagoda of Veeriruppu Village, Sankarankovil, Tamil Nadu, South India. 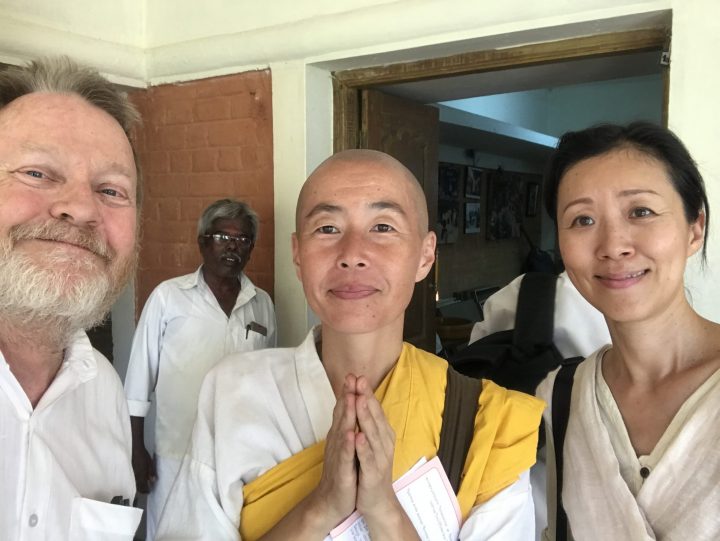 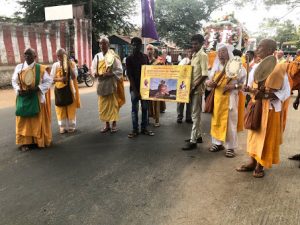 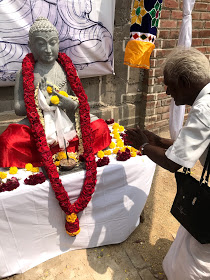 As we celebrated and renewed our commitment to Peace and in honor of Shakyamuni, the Buddha, we especially remembered Reverend Nichidatsu Fuji (1885-1985), founder of the Nipponzan Myohoji order of Buddhism in 1917, the most pacifist of Japan’s orders of Buddhism. Fuji-Guruji, as we call him, came to India from Japan in 1931 following his reading of the great Saint Nichiren (1222-1282) that the Lotus Sutra would one day be taken back to India and shared through chanting and the beating of the Daimoku Drum. Fuji-Guruji met Mahatma Gandhi in his ashram in Wardha in 1933 and spread the positive power of the mantra NA-MU-MYO-HO-REN-GE-KYO (Behold the Jewel in the Lotus, Glory to the Dharma of the Lotus Sutra). He also responded concretely to the tragic catastrophe of the Pacific War, publicly announcing his courageous commitment to Pacifism in the midst of a militaristic Japan in the 1930s and 1940s.

From 1947, he began building Peace Pagodas in Hiroshima and Nagasaki and throughout the world as well as monasteries, temples and pagodas to spread Peace. His work of spreading Nonviolence has extended thanks to the monks and together with pacifist activists, who have shown their commitment through prayers, fasting and long marches for Peace. Peace Pagodas can now be found in Japan, Korea, London, New Delhi, New York, Latvia, Nepal, Sri Lanka, Australia, Germany, Vienna, New England, Los Alamos, San Francisco, Comiso, Italy, and nearly 100 other locations. His followers have undertaken many peace pilgrimages, the Interfaith Pilgrimage for Peace and Life from Auschwitz to Hiroshima in 1994-1995 and the Walk for a Nuclear Free Future in 2010 across the United States. Fuji Guruji’s followers oppose nuclear weapons and US bases in Okinawa, Japan, which has put them at odds with the other Nichiren followers known as Soka Gakkai.

As a friend and collaborator of Mahatma Gandhi, Fuji Guruji was invited and encouraged by Jawaharlal Nehru after India’s independence to erect the first peace pagoda in India at Rajgir in the state of Bihar. Later, the monks of Nipponzan Myohoji built temples and pagodas in various places in India. At the end of the 1970s, G. Clarence Thanaraj, a school principal of the Catholic faith from Karaikudi, Tamil Nadu, who had strong esteem for the mission and connection with Fuji Guruji suggested that he erect a pagoda in Southern India. Fuji Guruji asked his close follower Masao Ishitani-Sensei to find a place to do this in South India. Following this friendship, Clarence Thanaraj, a close friend of Ishitani-Sensei, founded a Peace Pagoda at the Gandhi Museum in Madurai. Later, a piece of land was donated by Mr. M. Muthaiah, a lawyer and ardent member of the Gandhian Movement, near Sankarankovil, Tamil Nadu, a spiritually significant temple town thanks to the presence of a large Hindu temple of Sankara Narayanan, a deity which melds a half Shiva and half Vishnu. In the more than twenty years since the Peace Pagoda Sankarankovil began, Ishitani-Sensei has tirelessly labored for the monastery, the temple, and finally the large pagoda. 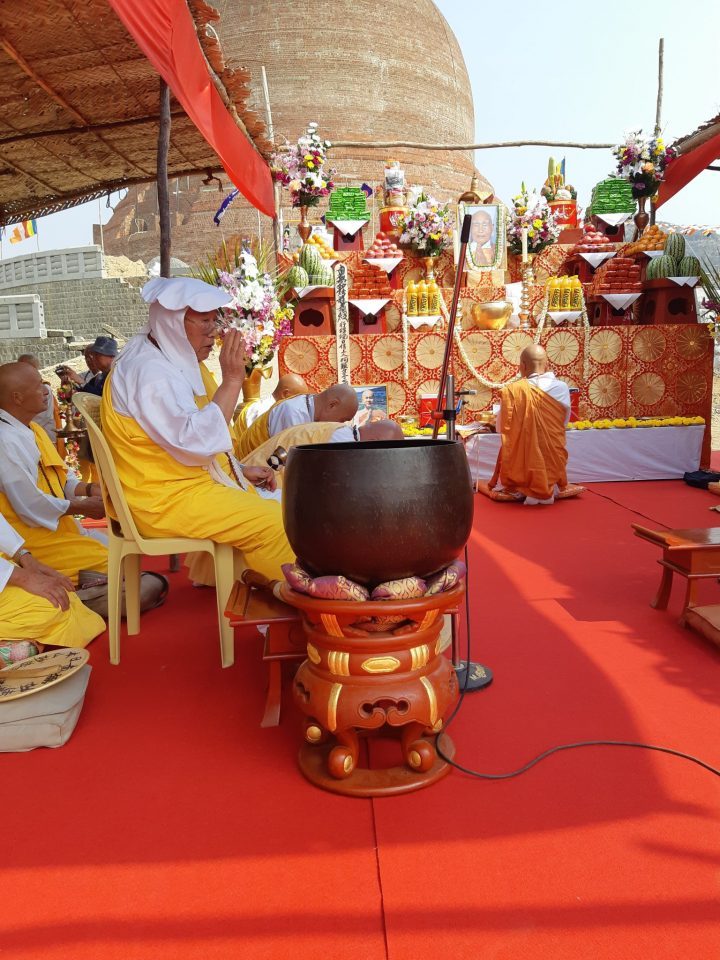 With great ceremony and in the presence of a thousand people from various countries and religions of the world, the Peace Pagoda was dedicated on March 4th from 10 AM–12 PM in the heat of a scorching sun with the sacred relics of Lord Buddha, which were placed high up in the stupa. This Ceremony of Enshrinement was performed in an atmosphere of great emotion and solemnity to the ritual beat of the drums of hundreds of monks and devotees present. The Chief Guest was H.E. Ganching Ganbold, the Ambassador of Mongolia, and his wife. Mr. Ganbold gave a moving speech that began with “Fellow friends walking in the Dharma…” Speeches by the Chief Monk G. Okonogi and Dr. S. Hakiri from Japan were also heard. The MCs were Monk Leelavathi and Mr. Senthil Kumar from Madurai. A large group of devotees from Japan graced the presence of the event led by Ms. Mika and Mr. Kenichiro Yoshihama of Japan.

Villagers from the surrounding area, school children, college students, Christians, Hindus, Muslims, Buddhists, and others who support Peace joined the event. Another group came from Italy following Rev. Morishita of Sicily, who in the 1980s participated in the nonviolent struggles against the installation of Cruise missiles in the Comiso military base in Sicily. In the panorama of the hills of a small Sicilian town, the Pagoda for Peace built by Rev. Morishita, represents a victory for nonviolent movements and has become, for many, an important and essential reference point. Present, too, was the Roman documentary producer and director Massimiliano Troiani, longtime friend of Nipponzan Myohoji and Ishitani-Sensei, who produced and presented two interesting documentaries: “A Buddha Stopped in Comiso” – which tells the story of Rev. Morishita and his encounter with the Italian pacifist movement – and “Gandhi’s Ashes”, which narrates the years of Mahatma’s nonviolent struggle through the precious testimonies of people who were close to him and which also documents the arrival of Ishitani-Sensei in India. 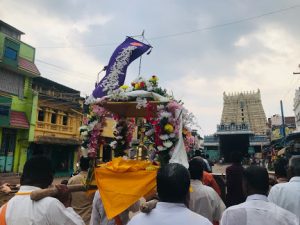 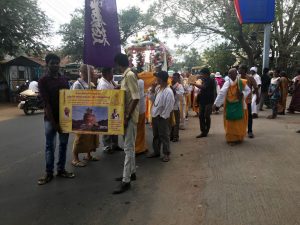 Before the Enshrinement Ceremony on March 3rd, there was a major Peace March through the streets of Sankarankovil that was watched by thousands. On March 2nd, the prominent and active Gandhian K.M. Natarajan of the Gandhi Museum in Madurai hosted the documentary, the documentary “Gandhi’s Ashes,” which was presented with great success. The current management of the Gandhi Museum has been able to enhance and encourage the creativity of the young locals who have welcomed international guests in these days, paying homage to them with significant gifts such as a wreath of flowers to be deposited on the Mahatma Cenotaph and precious spun cotton cloth hand-woven by local artisans, symbolic of the Charka Spinning Wheel so dear to the Mahatma.

Finally, we remember the inauguration of the new Gandhi Museum at the Sankarankovil Temple along with a statue of Gandhi created by the Patna, Bihar, Artist Ramkumar, a tangible sign of Gandhi’s deep friendship with Fuji Guru-Ji. The donor of the land Sri Muthaiah had made a vow to establish a museum to commemorate the life of Gandhiji and now that wish has come to fruition. The honor of inaugurating the work was awarded to 87-year-old Anna Luisa L’Abate, precious companion of life and struggle of the late great peace activist Alberto L’Abate. 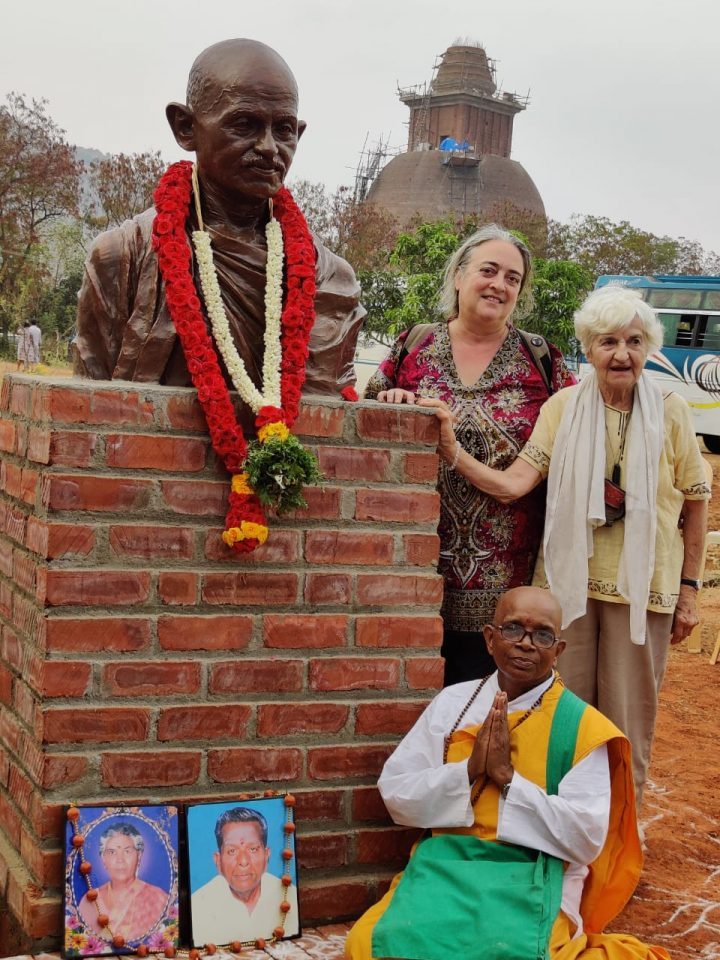 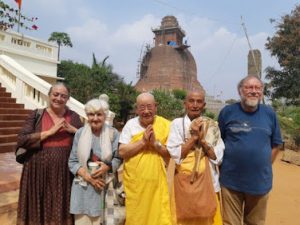 As Bhikku Ishitani said, too, in his invitation to the event:

“ Today, the world is fraught with the danger of human extinction by violence and arms. Once a war occurs and nuclear weapons explode, all the creatures will lose their life on this earth. There will be no winner or loser at that point. It will suffice to push a button and consequently, we all will perish from this planet. The time has come to receive and believe in the teaching of the non-killing of the Shakyamuni Buddha. There is no justification neither for a war nor for a homicide. All religions must honor and respect each other. The prayer of the Mantra “Na-Mu-Myo-Ho-Ren-Ge-Kyo” honors and respects all the religions and thereby brings peace within.”

As reported by: David Blake Willis
With Alessandra Bianca L’Abate and Massimiliano Troiani