Israeli security and political coordination with Hamas has served mutual interests for many years. Now Hamas is hoping to stay out of the current fighting in order to potentially expand its political power in the West Bank.

The new round of fighting between Israel and Islamic Jihad in Gaza gives one the impression that there is an unwritten agreement between Israel and Hamas. This is not exceptional in relations between enemies with common interests. Syria and Israel, for example, once had an understanding regarding the red lines of the latter’s involvement in Lebanon.

A knowledge of recent history is necessary in order to understand the delicate dance between Israel and Hamas. In 2007 Hamas ousted Fatah, which then ruled Gaza under strongman Mohammed Dahlan. In response, Israel imposed a blockade on Gaza, hoping it would bring down the Hamas regime, either through external pressure or by inciting an internal Palestinian revolt. That strategy failed: Hamas remains in power until today.

Israel changed its policy of overthrowing Hamas around 2010, opting instead for a type of co-existence. The government decided to institutionalize the separation between Gaza and the West Bank, gradually annexing parts of the latter while reaching practical agreements with Hamas. Israel refuses to allow Hamas a foothold in the West Bank, which is one of the primary reasons for its security coordination with Mahmoud Abbas and the Palestinian Authority.

Israel thus strengthens Abbas’ rule while increasing suspicion and hostility toward Hamas, but it has also reconciled itself to perpetual Hamas rule in Gaza. It uses classic divide-and-conquer tactics to control Palestinians on both sides, while understanding that should Hamas fall, the vacuum could be filled by one of the ISIS-aligned groups based in Sinai. Israel needs a stable relationship with Hamas in order to keep ISIS out of Gaza.

The coordination with Hamas was suspended in 2014, after Palestinian militants abducted and killed three Israeli boys in the West Bank. Israel accused Hamas of being responsible, ignoring its denials, and re-arrested Palestinian prisoners who had been released as part of the deal to release Gilad Shalit. That set in motion a military confrontation that ended the same way earlier rounds of fighting did — with the re-affirmation of previous strategic understandings, including easing the blockade, expanding Gaza’s fishing zone, and allowing money from Qatar into Gaza.

In September, when Islamic Jihad fired rockets at Ashdod while Netanyahu was delivering a pre-election speech there, the Israeli media began focusing on the group’s belligerent commander, Baha Abu al-Ata, who was assassinated by on Tuesday morning. Intelligence briefings emphasized that Abu al-Ata was likely a rogue commander who did not accept Hamas’ authority. 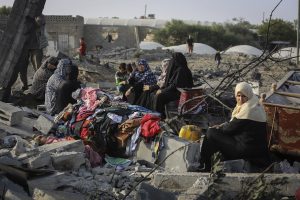 Palestinians gather around the remains of a house destroyed in an Israeli air strike in Rafah in the southern Gaza Strip, on November 13, 2019. Since Israel’s targeted killing of Islamic Jihad commander Baha Abu al-Ata yesterday morning, more than 220 rockets have been fired at Israel from Gaza. The Israeli air defence forces have intercepted 90 percent of the rockets. Photo by Abed Rahim Khatib/Flash90

Abu al-Ata was a target because he endangered the understandings between Israel and Hamas. By assassinating him, Israel sent a message to Hamas that it was interested in maintaining those understandings. Since Islamic Jihad militants began firing rockets in response to the assassination, Hamas has stayed out of the matter, while Israel has clarified that it is acting solely against Islamic Jihad. Hamas, whose top officials have not commented, has no interest in strengthening Islamic Jihad or in being dragged into an armed conflict with Israel. If, however, Israel’s responses take the lives of too many Palestinian civilians, Hamas will probably respond. In a situation of escalating tensions, this might happen as a result of operational failure or a misunderstanding.

Politically, Hamas is focused on the Palestinian elections that Abbas announced earlier this year. The organization is willing to accept Abbas’ parameters: parliamentary elections followed by a vote for the president. Hamas has also accepted that the elections will take place in a different format. Instead of regional elections in the 16 districts of the occupied territories — in which the winning party takes all — the elections will be country-wide. That means that even if Hamas does not win the majority of the votes, it will have an opportunity to gain a foothold in the West Bank and run its own candidate for president. Abbas, a deeply unpopular leader, has pledged not to run for an additional term. Hamas hopes that it can go beyond ruling Gaza and participate in national elections.

Menachem Klein is professor of Political Science at Bar Ilan University. He was an advisor to the Israeli delegation in negotiations with the PLO in 2000 and was one of the leaders of the Geneva Initiative. His new book, Arafat and Abbas: Portraits of Leadership in a State Postponed, was just published by Hurst London and Oxford University Press New York.