The idea that there’s no such thing as bad publicity could well be tested in the UK’s 2019 election campaign. So could the proposition that the only worse thing than people talking about you is people not talking about you, if our research into press coverage of the election is any indication.

Our analysis of the first week of the campaign shows that the Labour Party and its leadership are getting more press exposure than their rivals so far. But this isn’t necessarily good for Jeremy Corbyn and his colleagues, when so many of those stories have involved headlines such as this one in the Daily Mail on November 7: “‘The vast majority of British Jews consider Jeremy Corbyn an anti-Semite:’ Jewish Chronicle delivers devastating attack on Labour leader warning he must NEVER be PM”.

Or this one in The Sun the following day: “IAN AUSTIN ‘I’ve given 40 years of my life to Labour, but EVERYONE should vote for Boris’. Here’s why Corbyn is unfit for No10”.

Analysing press partisanship in the current UK general election might seem an exercise in investigating the stark, staring obvious.

If there is one predictable feature of British electioneering it is that most national newspapers titles will support the Conservative party.

But partisanship is a matter of degree as well as allegiance and close analysis of its basis and extent reveals important nuances. Take, for example, the apparent replacement of the “Tory press” with the “Tony press” between 1997 and 2005, when in three consecutive campaigns most press opinion supported Tony Blair and the Labour party.

Research shows these endorsements were uncharacteristically equivocal, offering tepid personal support for the then prime minister rather than his party. This period represented dealignment rather than a realignment in press opinion.

In 2010, majority press opinion again rallied behind the Conservatives but the cheerleaders of this change, particularly The Sun and Daily Mail, seemed uncertain who to target: a foundering Labour prime minister in Gordon Brown or a vibrant, telegenic Liberal Democrat leader in Nick Clegg? They had no such doubts in the 2015 and 2017 campaigns, with the Labour party leaders Ed Miliband and Jeremy Corbyn respectively being subjected to sustained, personal attacks from most of the highest-selling titles.

What can we expect in the 2019 UK general election where Brexit is likely to dominate the campaign landscape? Boris Johnson’s premiership has steered the Conservatives firmly into the Leave camp, aligning with the strong and established Eurosceptic orientations of many national titles.

But there have been industry changes since the last election that may be significant. A new editor, Geordie Greig, has been appointed at the Daily Mail, now vying with the Sun to be the highest selling daily newspaper in print terms, and he is widely perceived to be more liberal-minded and less anti- Remain than his predecessor, Paul Dacre.

The Daily Express and Daily Star have been bought out by the Mirror group, ending the influence of their previous proprietor, Richard Desmond, whose convinced Euroscepticism steered the Express to back UKIP in the 2015 election.

Elsewhere, the Daily Telegraph and the I paper are both up for sale at a time when market conditions remain extremely challenging. National press circulation in the 2017 general election was nearly half of the levels in the 1992 campaign when the Sun newspaper sold more than 3.5 million copies and famously declared: “It’s the Sun wot won it!” The latest circulation figures show the sector has lost a further 2 million readers since the 2017 campaign.

The Centre for Research in Communication and Culture at Loughborough University will be monitoring press partisanship throughout the campaign as part of its wider “real-time” audit of media coverage of the 2019 UK General Election. Our analysis of reporting of the first week of the formal campaign suggests that Labour are once again facing a rough ride from many national titles, despite the recent changes noted above.

In terms of overall press exposure, leading Labour figures either matched or exceeded coverage given to senior government figures. For example, Jeremy Corbyn and Boris Johnson were the joint most prominent politicians (appearing in 17.4% of all newspaper items) and John McDonnell, the shadow chancellor, gained more prominence than the actual chancellor, Sajid Javid (13.5% of all press items versus 9%). Overall, all Labour party sources accounted for 40% of all politicians featured, exceeding Conservative party appearances by 5%. 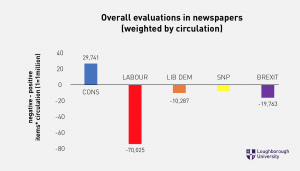 Moreover, a large proportion of newspaper items that featured Labour sources had a clearly negative slant. The extent of this is demonstrated in the chart above. For every item, we assessed whether the information or commentary contained within it had positive or negative implications for any political party. The results are calculated by subtracting the total number of negative stories from the total of positive stories for the five main parties. These scores are then weighted by press circulation (where 1 = 1 million).

The results show that Labour have already accumulated a substantial proportion of negative stories in the national press, with only the Conservative party showing a positive balance in the press ledger.

One frequent manifestation of newspaper ambivalence towards Blair was the criticism that his party was obsessed with presentation rather than substance. In 2019, “spin” appears to have disappeared from the electoral lexicon and it is the supposed evil of conviction politics rather than confection politics that is the basis of many press attacks on Labour.

Click here to subscribe to our newsletter if you believe this election should be all about the facts.