Between 19 and 26 November we closed the last stage of the journey. We arrived at Livorno and Bamboo heading to their base on the island of Elba.

November 19 – It ‘s raining as we said goodbye to our friends from the Naval League and the Canottieri Palermo and loosened the moorings.

A brief stop to refuel and then leave the port and put the bow toward the north-northwest, waiting 385 miles to reach the last stage: Livorno.

A joke on board: “There are only two meters waves, we can go,” laughed though the effort we begin to feel, especially for those who have done it all the time.

In Palermo there was another change of crew, Rosa and Giampietro Andrea got out and returned.

Alessandro will come this time and we will continue by plane. In five hours we are in Ustica, the island became famous in the 1980 air disaster: a civilian plane was shot down during a fight never clarified in the sky between NATO warplanes and Libyans. 81 civilian deaths.

A dark page in the history of the Mediterranean.

We headed straight to the port of Riva di Traiano (Civitavecchia) where we arrived at 1 of 21. We took a restful night.

November 21, surf the Giannutri and Giglio, then Elba.

November 21 – At 8 in the morning we left again with sirocco wind, sailed through the islands of Giannutri and Giglio, then Elba.

Here we caught a violent storm that accompanied us to the Gulf of Baratti where we dropped anchor 21 and in the calm of the Gulf we had a good hot dinner.

November 22, arrived at Livorno a little earlier than expected

November 22 – The sky is threatening rain but fortunately it was avoided. We cover the last 35 miles to Livorno with strong winds but finally calm sea, enjoying the boat sailing fast.

The last hours of sailing were perfect, it almost seems that the sea wants to reward us for our toughness. Bamboo is confirmed as a formidable boat.

We arrived at Livorno a little earlier than expected and 12.30 moored at the dock of the Naval League, received by President Fabrizio Monacci and Giovanna Wilf honorary president of Italy, the Association of Women for Peace organised this stage.

As always it happens when you get to the end of a trip all is a mixture of fatigue and satisfaction.

We got it, we got to the end of this long winter navigation, all safe and sound. It seems obvious, but in the sea nothing is obvious.

We have not broken anything, no one is hurt and apart from the stage of Tunisia recovery in February, have respected the calendar navigation.

We now expect the race tomorrow, promoted by the Anti-Violence Network and the Association hippogrifo is organised every two years by the Circle of Livorno and the Naval League.

This year is the turn of the LNI. The race is called Controvento and carries a water protest against all forms of violence against women, private but also politics and war, because women, with their children, have always been those who pay the highest price in armed conflict.

November 24 – We woke up with bad news: Livorno area has been declared a weather alert.

Tuscany and Liguria and Piedmont are plagued by torrential rains. Alerts are continuous, everywhere, overflowing rivers and landslides.

Nature presents us the bill. The race was canceled and the meeting with the Coro Garibaldi and puppet show scheduled for Claudio Fantozzi was later moved to a sheltered place inside the Old Fortress.

At 9.30 Giovanna with other friends we reached in the spring, there are the cars of Mercy who came to greet us with their sirens, local television and some journalists.

The sky is overcast and raining. We take it with joy. There is nothing more to do.

Giovanna organises a lunch at home and after a month at sea we were finally seated in a real house, with a beautiful view of the city, around the dining table in an apartment that speaks of peace in every corner: Books and documents scattered everywhere, posters and music.

At 15.00 hours we are in Fortaleza. The place is a bit menacing; The old fort overlooking the harbour itself sums up the whole history of the city and found ourselves in a huge vaulted room and wet indeed.

Among the guests is also Antonio Giannelli, president of the Colour Association for Peace, to whom we return the piece of blanket of Peace and 40 designs Colours exhibition of Peace, in total more than 5,000 who have traveled with us through the Mediterranean.

Antonio has the experience of his association, which is headquartered in Sant’Anna di Stazzema, where in 1944 the people were massacred by the Nazis 357 people, 65 were children.

Stazzema since 2000 has established the Peace Park. Association I colori della Pace has implemented a global project in which children from 111 countries that have expressed through their drawings hopes for peace are involved.

The meeting also remembers the 140 victims of the Moby Prince, the biggest crash of the Italian merchant navy.

An accident that has never been clarified, behind which there are military secrets.

The port of Livorno is one of the 11 nuclear Italian ports, is open to the transit of nuclear-powered vessels; in fact, it is the exit to the sea of Camp Darby, the American military base established in 1951, sacrificing 1,000 hectares of coastline.

Camp Darby is the largest arms depot outside the United States. And they are expanding: a new railway, a swing bridge and a new dock to receive men and weapons.

Where there are military, there are secrets. Livorno and around Camp Darby are no exception, as explained Tanzini Tiberio, of the anti-war committee Florence.

A motion to make public evacuation plans and protection of citizens in case of a nuclear accident has been presented and approved in the Tuscany region.

It’s been months and the plan has not been submitted or made public. Why? To inform citizens of the risk of a nuclear accident would mean admitting that risk, they prefer to hide and ignore there.

Italy is a country of paradoxes: we held two referendums to abolish civil nuclear energy and shutdown of nuclear plants, but we live with military nuclear energy. Really a schizophrenic country.

November 25, Pisa – Today we go by land to the University of Pisa. Pisa University offers a Bachelor of Science for Peace: International cooperation and conflict transformation, and now we are among the desks to have a lesson of peace.

Among the speakers are Angelo Baracca, professor of physics and the history of physics at the University of Florence, Professor Giorgio Gallo of the Interdepartmental Center for Peace and Sciences Ferrieri Luigi Caputi, one of the guys from Fridays for the Future.

Angelo Baracca deals with the subject of the connections between the scientific world and war, an ancient link never broken.

In fact, the scenario described is that of a scientific world subjugated to the military-industrial complex where tens of thousands of experts work, who seem to feel the weight of social responsibility even though the voices are beginning to rise against the current world: groups of teachers and students at Hopkins University oppose the participation of the University in research on military nuclear energy.

Luigi, the young student of the FFF movement begins with a question: what is the connection between war and climate?

And then explains the connections: the resource crisis caused by climate change, flooding from Southeast Asia to desertification in Africa, is the cause of conflict.

When there is a lack of water, food, or the land is irreversibly contaminated, there are only two options: fight or flight.

Climate, migration and war are elements of the same chain on behalf of the benefit for a few, mortgaging and destroying the lives of many.

The old teacher and young student have in common a vision of a future where governments invest in energy conversion and ecology rather than weapons, a future in which all see their responsibilities, citizens, politicians, scientists.

A future in which profit is not the only law that must be respected.

November 26 – Today we expect at the Museum of History of the Mediterranean very young children in some school classes in Livorno.

With the group of the March there will be a group of Piumani.

It is difficult to explain what the Piumano movement is, the name is a game of untranslatable words. Theirs is a non-violent action dealing with “soft” the deeper issues.

Our meeting brought their music and songs, the poetry of a Palestinian poet read by Ama, a Lebanese girl.

The music is interspersed with speeches by Alessandro Capuzzo, Giovanna Pagani, Angelo Baracca and Rocco Pompeo of the movement for non-violence, which explains how a world without armies is possible with a civil defense unarmed and non-violent. No war without armies.

Article 11 of the Italian Constitution says: “Italy repudiates war as an instrument offending the freedom of other peoples and as a means of resolving international conflicts …”.

Italy rejects war but not the business that revolves around it

And here’s another paradox: Italy rejects war but not the business that revolves around it.

Angelo Baracca reminds us there are four billion more military spending for 2020.

How many schools, how much territory, many utilities could be restored with the money allocated to war?

The meeting in the museum ends with a big circle: all students come back to us with a word the emotions and thoughts that spurred this meeting.

And then all marching through the streets of Livorno, with the flag, the flag of peace, music and joy.

We arrived at the Piazza della Republica and formed a human peace symbol for the watching eyes of Livorno.

In the afternoon the last meeting at Villa Marradi

And here we are in the final jokes. In the afternoon the last meeting in Villa Marradi with other associations working for peace. It’s 6 pm when we parted.

The trip has really reached the last stage. Meanwhile, Bamboo has returned to its base on the island of Elba.

In the chat wathsapp greetings intertwine among all those who participated in this trip.

Let’s go home. In our sailing bags we put so many meetings, so much new information, so many ideas.

And the realisation that there are still many kilometres to go to reach peace, but there are many people travelling to this destination. Good wind for everyone! 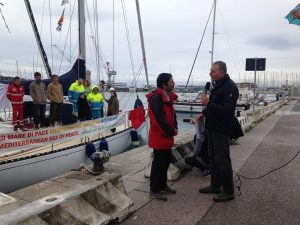 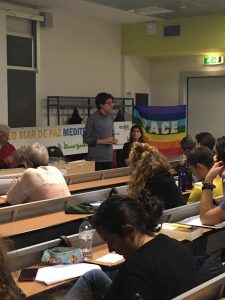 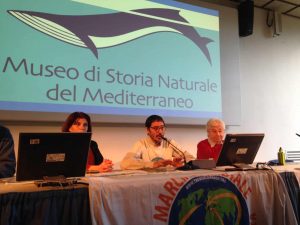 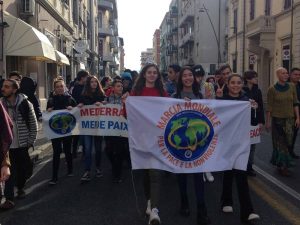