The ocean considered as a source of wealth for millennia, and conjoining to the economies around the world. There are many large cities and centers of commerce developed depends on access to the sea, and now some 38 percent (and growing) of the global population is expected to live within 100 kilometers of the coast. Submarine cables cross the ocean’s floor to carry 90 percent of the electronic traffic upon which global communications rely.

The ocean’s floor provided 30% of global consumption for oil & gas. The estimated 1 to 1.4 million different species that live in the ocean support a growing commercial interest in marine genetic resources that  is  leading  to  the  commercial  development  of  pharmaceuticals,  enzymes, and cosmetic products. The rate of patent applications related to marine genetic material increased at rates exceeding 12 percent per year from 1999 to 2008. Over 5,000 genes derived from marine organisms had been patented by 2010.

The newly demarcated area of the Bay of Bengal has opened a new economic frontier for Bangladesh. In order to utilize its unexplored marine resources, Bangladesh is already taking initiatives to flourish its Blue Economy. Since 2015, the GoB has undertaken a number of consultations and workshops on Blue Economy. Besides, Bangladesh’s Seventh Five Year Plan has called for twelve actions to be undertaken for maintaining a prosperous and sustainable Blue Economy, which include fisheries, renewable energy, human resources, transshipment, tourism and climate change among others.28 In 2017, the GoB has established the “Blue Economy Cell’ with the mandate to coordinate Blue Economy initiatives across sectoral ministries. According to a World Bank report, the gross value added to Bangladesh in 2014-15 from ocean economy was US$ 6,192.98 million which was around 3.33 per cent of the Bangladesh economy.29 However; Blue Economy has the prospect of contributing to Bangladesh’s economy on a much higher level. The Ministry of Foreign Affairs (MoFA) has identified 26 potential Blue Economy sectors.

Bangladesh has 710 km long coastline with 200 Nautical Miles of an exclusive economic zone inside the Bay of Bengal. Marine fisheries contribute 19.4% of the total fish production of the country. Besides, the western coastline of Cox’s Bazaar is the longest sea beach in the planet that is visited by on an average, 81% of the international tourists arrive in Bangladesh. By using sustainable marine resources Bangladesh can promote as a middle-income country (MIC). At present; the countries are becoming very much concerned about their marine resources to resolve many of the present and future challenges of their economies. Generally for Bangladesh, ocean is contributing a noteworthy role to its overall socio-economic growth through increasing up the economic activities across the country and especially to the coastal zone at southern part.

Bangladesh has settled maritime boundary disputes with Myanmar in 2012 and with India in 2014 through an arbitral method. Within the authority of Bangladesh, the sea is capable with huge and valuable natural resources, living and non-living. Experts claimed that fish alone has 500 varieties besides snails, shell-fish, crabs, sharks, octopuses and other animals. Bangladesh is estimated to catch only 0.70 million tons of fish every year out of the total 8 million tons of fish available in the Bay of Bengal. Besides fish and other living animals, Bangladesh could also have gas fields as it is reported that Myanmar has discovered a large gas field on its area of the sea. Experts are of the view that Bangladesh would be able to extract resources worth about $1.2 billion dollar. 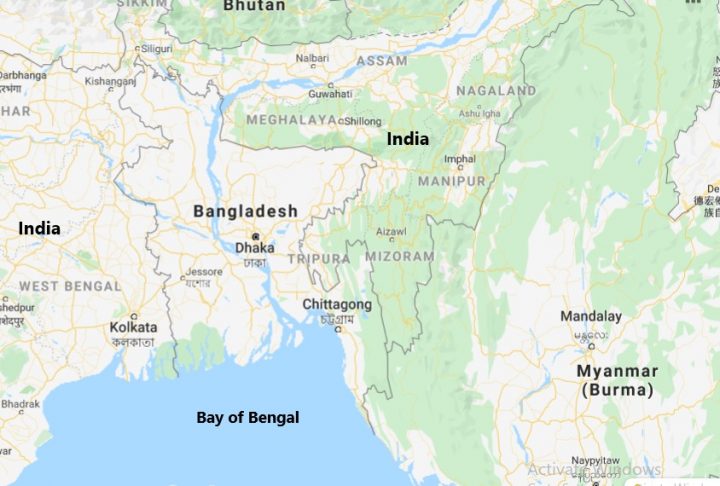 Bangladesh  formed  by  a  delta  plain  at  the  confluence  of  the  several  trans-boundary mighty rivers, in usually characterized by its typical geographical settings, the  Himalayan  range  in  the  North  and  the  Bay  of  Bengal  in  the  South.  These  two  unique  features  historically  shaped  formation  of  major  habitats  and  human  habitation,  social-economic  structures,  development  priorities  and,  of-ten, the basis of relationship and diplomacy with the neighbors and other south Asian countries. Country’s  710  km  long  coast  line  extending  from  the  tip  of  St. Martin’s  Island  in  the  southeast  to  the  west  coast  of  Satkhira  and  121,110 square k.m. sea area are characterized with uniquely differentiated ecosystems having significant  ecological  and  economic  importance  and  potential  [14].  There  will  be  a  human  flow  to  the  southern  part  of  Bangladesh  due  to  blue  economic  zone  development.  It  will  create  employment  opportunities  and  other  income-generating activities,  develop  other  social  services,  security  services  as  well  as  the  overall  standard  of  life  for  the  local  people  at  coastal  areas.

World Bank (2014) reported that middle-income economies are those with a Gross National Income (GNI) per capita of more than US$ 1045 but less than US$ 12,746. Bangladesh was found in lower-middle-income country category in the year 2014, as it achieved US$ 1080.00 which was only US$ 958 in the year 2013. Bangladesh Bureau of Statistics (BBS) published that the per capita income in Bangladesh rose from $ 1190 to $ 1314 on May 14, 2015. The vision 2021 plan and the associated perspective plan 2010-2021, adopted by the Government of Bangladesh lay out a series of development targets for 2021. Among the core targets identified to monitor the progress toward the vision 2021 objectives is that of attaining a poverty headcount of 14 percent by 2021. The rate of poverty headcount was about 28.5 percent by 2015, which significantly ahead of scheduled at Millennium development Goal (MDG).  Attaining  the  vision  2021  poverty  target  of  14  percent  by 2021,  however, is  less  certain  as  it  requires  a  Gross  Domestic  Product(GDP)  growth  of  at  least  8  percent,  or  more  than  2  percentage  points  higher  than  that  observed in recent years. According to the Bangladesh Bureau of Statistics (2016) records, GDP in Bangladesh was 7.11% in FY: 2015-2016 at Bangladesh and estimated to be increased at 7.20 in 2017 (BBS, 2016).  So,  the  trend  is  positive,  and  if  Bangladesh  cannot  utilize all the possible scopes as exporting sectors, marine resources, it may not be possible to become a Middle Income Country within the expected year by 2021. The  marine  resources  are  described,  while  emphasis  is  given  to  living  re-sources,  particularly  ecosystems  and  fisheries.  Of  the  intertidal  ecosystems, mangroves  are  the  most  diverse  and  highly  productive  and  very  important  regionally. Considering the major regional and global context, fisheries and aqua-culture are important,  particularly  for  penaeid  shrimp  (Penaeus  monodon)  and  also  for  pomfret,  hilsa  shed,  bombay  duck,  mackerel,  eel,  ribbon fish,  snapper, cat fish and Indian salmon.

It is reported that the country has 75 outer-islands which could be utilized for tourists both local and foreign. If Bangladesh can explore and exploit these resources through the use of appropriate technology, the economy of Bangladesh can grow rapidly into an advanced one. Although the government of Bangladesh has leased out some areas of Bay of Bengal to foreign companies, it is believed that they are not using expensive modern machinery to extract the resources.

There is one important factor to consider for Bangladesh: that is, with the increase of the population of the country, it would be gradually more dependable on sea resources than those in the landmass. The resources include endless renewable reserves in wind and solar energy.

It is worthwhile to mention that 15 percent of the protein is provided from sea resources for the people across the world. Natural gas and oil constitute 30 percent of the sea resources and over 50 percent of magnesium is extracted globally from the seas. Even life-saving medicines could also be obtainable from these resources.

Given the possibility of acquisition of wealth from sea, Bangladesh is required to develop policies and laws to strengthen national institutions which could deliver solutions to implement its Sustainable Development Goals, i.e. evaluation of goals must go beyond measurement, to consider whether progress is equitable, relevant and sustainable. It is significant to note that Bangladesh’s trade is carried out mainly through the sea and that a USD-45-billion trade is possible for Bangladesh.

It is estimated that 5 percent of the country’s GDP could be acquired by 2030 from the resources of the sea. Bangladesh could be a developed country by 2041 if the resources are properly extracted and adequately used. It is reported that Indonesia’s national economy depends largely on its sea resources and Australia is reported to have earned USD 44 billion from sea.

In 2015, a resolution proposed by Bangladesh was adopted by the General Assembly of the UN for sustainable development, and its purpose was directed at achieving 17-point economic growth by 2030, of which 14 points were contemplated from the perspective of blue economy. During the last few years, blue economy was the central topic of many international conferences.

The Rio+20 Conference on the seas, and the conference at Bali (Indonesia) for the food security and growth of blue economy could be cited as examples. The strategy of the international organizations such as the World Bank and the UN Environmental Organization is acquisition of sea resources. 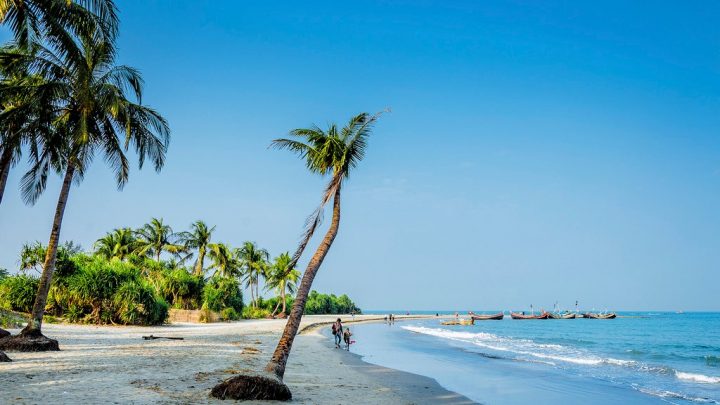 Sea resources offer a new window of opportunity for Bangladesh. An increasing knowledge of the seas including the impact of wind, waves, high tide and ebb tide, change of temperature of the living organisms, and increase of salinity on the surface of seas could lead to sources of renewable energy. Every year, the use of wind from the seas is increasing by 40 percent and Bangladesh could use wind power for various purposes to strengthen its economy.

To feed the people from the sea resources, Bangladesh is required to push policies in cooperation with other countries to protect the ocean from the effects of climate change, pollution and over-fishing. We need to preserve the ecosystems of the seas which are reportedly being degraded at an unprecedented rate, and this is not an issue only for Bangladesh. It should be addressed in cooperation with other countries.

It is now well recognized that oceans hold an incredible potential for meeting the world’s ever-growing economic demand. The concept of Blue Economy is becoming popular with policy makers globally, and countries are taking various initiatives to adopt it. There is no universally accepted definition of Blue Economy,

But it can be said that the Blue Economy is a way to maximize the economic value of marine resources in a manner that preserves sea’s overall health. The components of Blue Economy include different ocean related industries, economic activities as well as measures to protect the marine life and environment.

Bangladesh is also paying attention in advancing its Blue Economy and looking forward to embark this new frontier to utilize its vast sea region. Thus, the country has explored only a small number of Blue Economy sectors such as fisheries and aquaculture, shipbuilding, ship breaking, salt generation and port facilities. Nevertheless, most of these sectors are still operating in traditional methods and there are opportunities for introducing innovation and technology for further expansion. Moreover, there are a number of Blue Economy sectors with great economic potential, e.g., seafood processing, marine biotechnology, exploration of oil, gas and other minerals, desalination and blue carbon, where Bangladesh’s exposure is limited or absent. Therefore, exploring these sectors will be beneficial for the country.