On Friday, October 18, Andrew Yang answered livestream questions from the general public. At the beginning of the 10-hour marathon, Andrew Yang had 20,000 questions on the website and 10,000 more using the hashtag-Andrew crosstalk platform. He’s also answering questions on Quora. If you have a question, you can post it on Quora, and the Andrew Yang, himself, will answer it. We selected excerpts from this interchange between the candidate and the electorate concentrating on the Universal Basic Income.

So the backdrop to this, there’s I spent seven years running a nonprofit that I’d found, Venture for America…As part of that time I spent time, I was reading books about the future of work and I read a book by a guy named Andy Stern, called Raising the Floor. He was the most powerful prominent labor leader of his time. He was head of the SEIU—which I think is still may be the biggest union in the country and he said the future of labor is no labor [and] we’re kind of screwed and we need to have a foundation for all Americans at $1,000 a month. This someone who championed labor for decades…We need to do something bigger and more fundamental and more dramatic. At the end of the book, he said someone needs to run for president [with the platform] for the universal basic income.

I’ve been trying to figure out ways to translated it to every day experience. it’s and so the things i’ve been saying that thirty percent of malls and main street stores are closing in the next four years; self-serve kiosks in every McDonald’s by 2021; call center software like replacing more and more of the two and a half million calls center workers… For the things that I feel people can relate to their own experience with… [For example] I do get that software when I call it… so most people don’t realize the most common jobs in the economy are retail, administrative clerical which includes call center, foodservice…truck driving and manufacturing and those five job categories comprise about half of American jobs… these five are going to shrink a great deal. it’s already happening to manufacturing right [now]. It went from seventeen million to twelve. And if you look the other categories they are going to shrink too…

and formation rates in a multi-decade lows in mostly entrepreneurship levels among younger people historic lows rates; people who been moving across state lines in America multi decades  low. So all of the happy talk…find new things, start new business…

There are four ways you can think of getting the money but number one is right now we have the biggest companies in our country that they are paying zero or near zero in taxes.

Amazon [pays] no taxes. Netflix [pays] zero taxes.  Google lose a lot of earnings to Ireland. They don’t pay zero, but they pay a lot less that you think…How do we pay for it? You give us slice of every amazon sale, every google search, every Facebook ad, every robot truck mile. Hundred of billions in a new revenue… 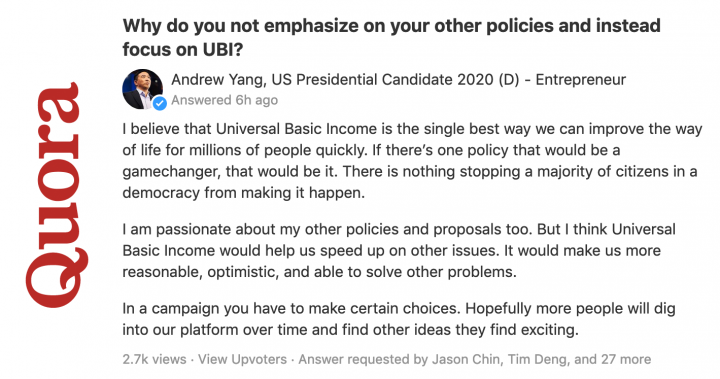 Finally and after listening Andrew Yang, I would like to invite everybody to participate in the Basic Income March on October 26. Here is the link. 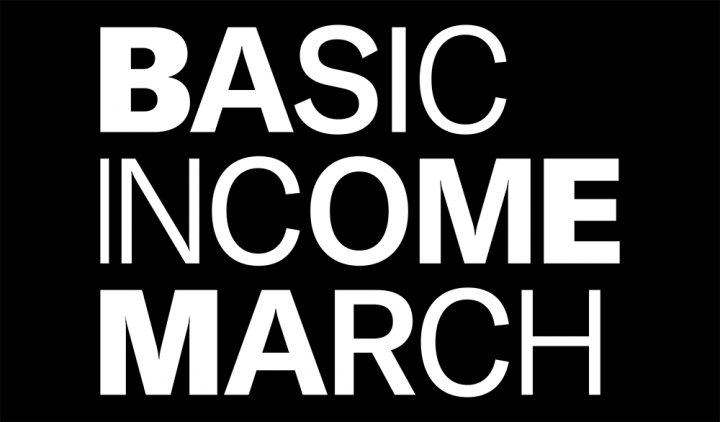