“There is no way to win an atomic war without eliminating human civilization as we know it today,” Tony Robinson, producer and coordinator of the documentary The Beginning of the End of Nuclear Weapons, told Sputnik on August 29, International Day Against Nuclear Tests.

It was chosen on 29 August to commemorate the closure of a nuclear test site on that date but in 1991, which operated on Kazakh territory, then integrated into the Union of Soviet Socialist Republics (USSR).

The existence of a nuclear bomb shocked and frightened the world when, on August 6, 1945, the United States used it for the first time against the Japanese city of Hiroshima, while three days later it threw another one on Nagasaki.

These attacks resulted in hundreds of thousands of direct casualties among the dead and wounded, including those who over time proved that the radiation released by the bomb continued to wreak havoc on future generations.

This demonstration of American power prompted the USSR, the United Kingdom, France and China to make their own nuclear bombs as a deterrent.

“Ten years ago in the forums where these UN things are worked on, normally the people who spoke were the powers that have nuclear weapons. They said, ‘we need them for our security,'” Robinson said, referring to the time when the U.N. anti-test date was passed.

“Starting in 2010 this changed, and instead of talking about the security needs of these powers began a process of talking about the effects and consequences for humanity,” said the London editor of the international agency Pressenza, which produced the documentary released May 29.

The film reviews the history of civil struggles in different parts of the world against the military use of nuclear energy and goes on until July 7, 2017, the day of the approval of the Treaty by 122 countries on the prohibition of Nuclear Weapons. 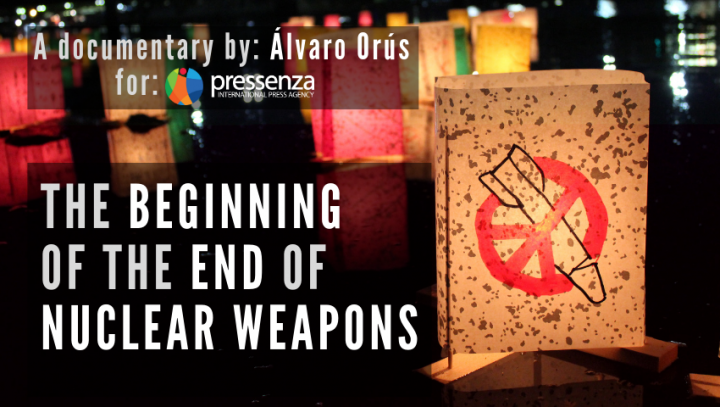 “Those who don’t have nuclear weapons, but live under their threat, voted in favour,” the film says.

“In one of the interviews [of the documentary], a doctor says, ‘we can do everything in our power to maintain the state of health of our patients, but if a nuclear bomb comes it will be in vain, it is the greatest danger to human health,” Illustrated Robinson.

If an atomic war were unleashed, there would be no winner because of the global consequences it would cause, since the bombs dropped on Hiroshima and Nagasaki have been widely surpassed at this point in terms of their destructive power.

“There is no way to win an atomic war without eliminating human civilization as we know it today,” Robinson said.

It is estimated that a possible atomic confrontation between India and Pakistan “could end the lives of up to two billion human beings, and not just in these two countries. So it is a very important and urgent problem for humanity,” he concluded.