Time is running out to prevent a Climate Change disaster. The signs are clear, the science is clear and it’s also clear who is attempting to deny them.

Glaciers are melting, the sea is warming up, coral reefs are dying, ice caps are shrinking, islands are sinking, hurricanes are stronger and governments continue to give licenses for fracking even if it produces earthquakes and contaminate drinking water.

Whilst not one individual event can be associated to Climate Change brought about by the burning of fossil fuels with absolute certainty, the combined effect of events and computer models are pretty convincing.

Fossil fuels are also killing people through cardiovascular, lung, kidney disease, and are affecting in particular children and pregnant women. But the industry refuses to switch to renewables because of profit.

These are forms of violence just as wars, inequality and nuclear weapons are.

Today the grownups joined the kids that inspired them to give those in power a clear message: it’s time to act, its time to change.

Here are some pictures from the London demo. 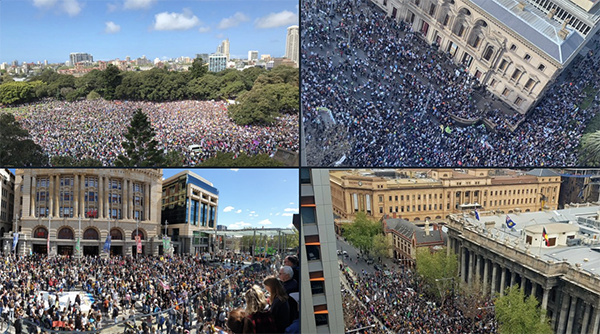