As fires rage across tens of thousands square km the Amazon forest, dubbed the Planet’s lungs, producing some 20 percent of the oxygen in the atmosphere, with some 72,843 fires in Brazil this year, where fires on such a scale are uncommon, as well as through Siberia, Alaska, Greenland,  southern Europe and elsewhere,they herald a world where increasing temperatures and droughts overwhelm original habitats, flora and fauna (Figure 1).

As the Antarctic and Greenland ice sheets progressively melt, at more than 6 times faster than during the Seventies, the tropics expand and arid deserts encroach into temperate Mediterranean-type climate zones at a rate of 56 – 111 kmper decade, the Earth’s fertile regions are progressively replaced by environments less suitable for farming.

According to reports “climate change itself is making dry seasons longer and forests more flammable. Increased temperatures are also resulting in more frequent tropical forest fires in non-drought years. And climate change may also be driving the increasing frequency and intensity of climate anomalies, such as El Niño events that affect fire season intensity across Amazonia.” 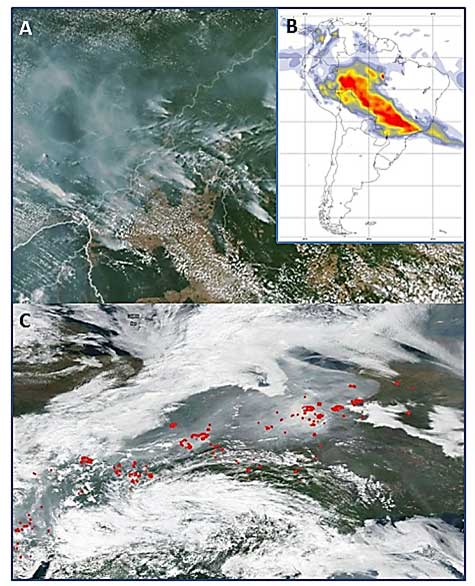 Figure 1 (A) Burning Amazon rainforest; (B) A warm smoke plume emanating from the Amazon fires; (C) The spate of Siberian wildfires from July 2019, reaching 6.4 million acres.

The pace of global warming is astounding climate scientists. Within the last 70 years or so major shifts in climate zones and an accelerating spate of extreme weather events—cyclones, floods, droughts, heat waves and fires (Figure 2)— is increasingly ravaging large tracts of Earth. 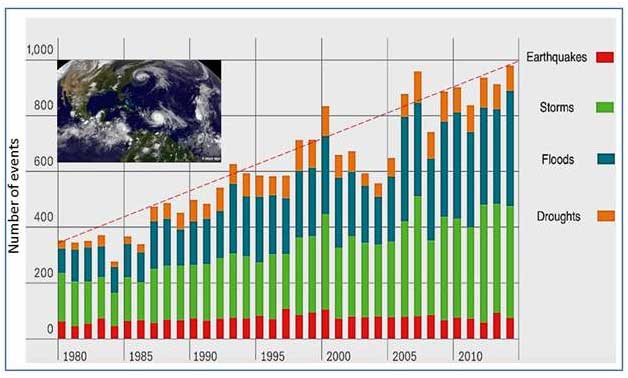 However, despite  its foundation in the basic laws of physics (the black body radiation laws of Planck, Kirchhoff’ and Stefan Boltzmann), as well as empirical observations around the world by major climate research bodies (NOAA, NASA, NSIDC, IPCC, World Meteorological Organization, Hadley-Met, Tindale, Potsdam, BOM, CSIRO and others), the anthropogenic origin, scale and pace of climate change remain underestimated and the subject to extensively propagated denial and untruths. Extreme climate change remains counter intuitive to many, let alone where potential mitigation could affect vested economic interests.

Climate scientists find themselves in a quandary similar to medical doctors,committed to help the ill and facing situations where they need to communicate a grave diagnosis. How do they tell people that the current spate of cyclones, devastating islands from the Caribbean to the Philippine, or floods devastating coastal regions and river valleys from Mozambique to Kerala, Pakistan and Townsville, can only intensify in a rapidly warming world?How do scientists tell the people that children are growing into a world where survival under a mean temperatures higher than +2 degrees Celsius (above pre-industrial temperatures) may be painful, and in some parts of the world impossible, let aloneunder +4 degrees Celsius projected by the IPCC?

The Cassandra syndrome is alive and well. Throughout history messengers of bad news have been rebuked or worse, nowadays facing reluctance on the part of the mainstream media to publish the dire climate change projections. Given the daunting scenarios climate scientists are looking at, many find it difficult to talk about the issue, even among friends and family.

As atmospheric levels of CO2, methane and nitrous oxide have reached a combined level of near 500 parts per million, intersecting the melting threshold of the Greenland and west Antarctic ice sheets and heralding a fundamental shift in state of the terrestrial climate, fires consume large parts of the land.

It would appear parliaments preoccupied as they are with economics, legal issues and international conflicts, hardly regard the future of nature and civilization as a priority.