While the rise of methane in the Earth’s atmosphere over the past decade has been “globally significant,” quick action to end fracking would have a rapid, positive impact on the environment

by Julia Conley, staff writer for Common Dreams
New research by a scientist at Cornell University warns that the fracking boom in the U.S. and Canada over the past decade is largely to blame for a large rise in methane in the Earth’s atmosphere—and that reducing emissions of the extremely potent greenhouse gas is crucial to help stem the international climate crisis.

Professor Robert Howarth examined hydraulic fracturing, or fracking, over the past several decades, noting the fracking boom that has taken place since the first years of the 21st century. Between 2005 and 2015, fracking went from producing 31 billion cubic meters of shale gas per year to producing 435 billion cubic meters.

Nearly 90 percent of that fracking took place in the U.S., while about 10 percent was done in Canada.

The fracking method was first used by oil and gas companies in 1949, but Howarth concluded that fracking done in the past decade has particularly contributed to the amount of methane in the atmosphere. As Kashmira Gander wrote at Newsweek:

While methane released in the late 20th century was enriched with the carbon isotope 13C, Howarth highlights methane released in recent years features lower levels. That’s because the methane in shale gas has depleted levels of the isotope when compared with conventional natural gas or fossil fuels such as coal, he explained.

“The methane in shale gas is somewhat depleted in 13C relative to conventional natural gas,” Howarth wrote in the study, published Wednesday in the journal Biogeosciences. “Correcting earlier analyses for this difference, we conclude that shale-gas production in North America over the past decade may have contributed more than half of all of the increased emissions from fossil fuels globally and approximately one-third of the total increased emissions from all sources globally over the past decade.”

“The commercialization of shale gas and oil in the 21st century has dramatically increased global methane emissions,” he added. 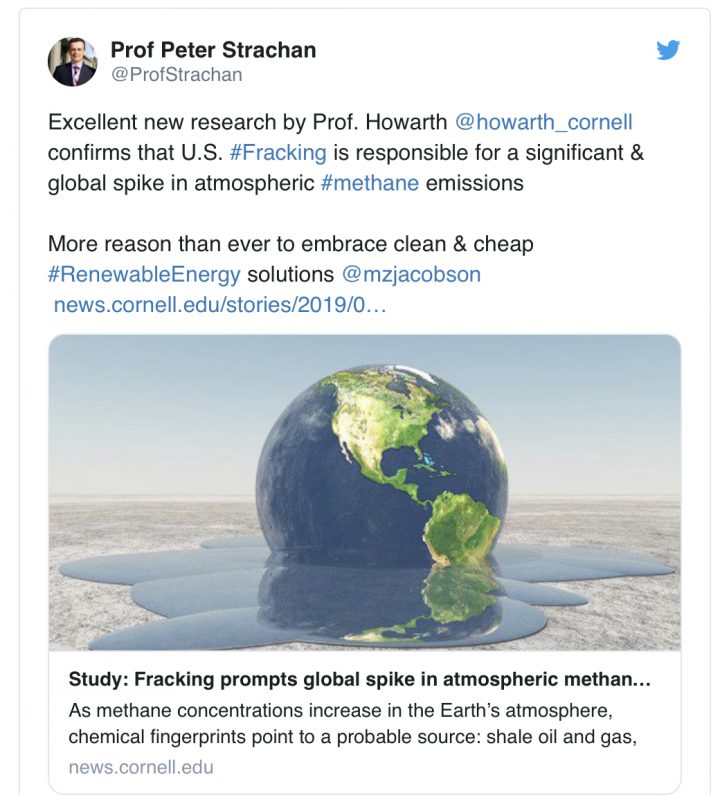 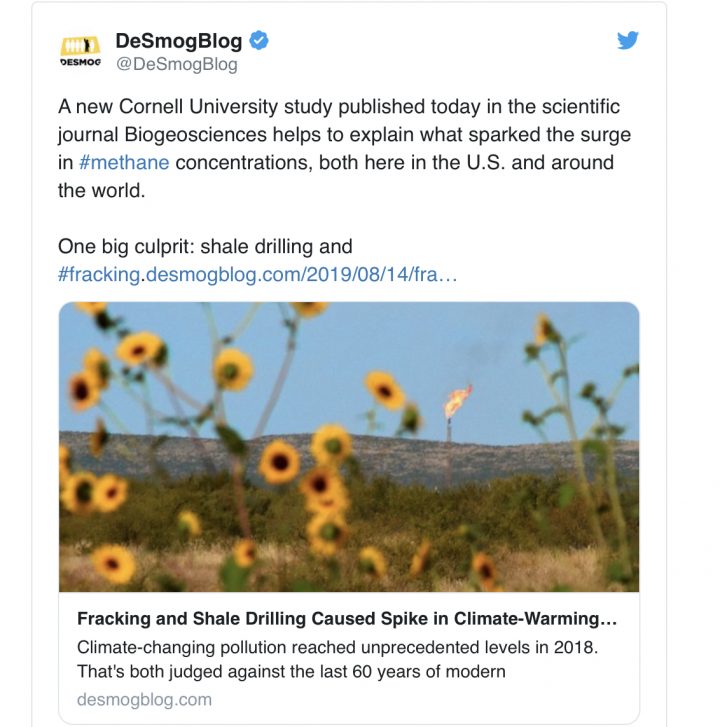 In addition to being the second-biggest contributor to the climate crisis after carbon dioxide, methane has been known to cause and exacerbate health issues for people who live in areas where large amounts of the gas is present in the environment.

Chest pains, bronchitis, emphysema, and asthma can all be caused or worsened by high levels of methane. The process of fracking has also been linked to pollution in drinking water.

The Trump administration has no plans to reduce the amount of fracking that is taking place in the U.S.—rather, President Donald Trump has moved to open up public lands to gas and oil companies looking to purchase leases for fracking.

Cutting emissions of methane promptly would have a positive impact on the atmosphere and could help to slow the climate crisis, because the atmosphere reacts quickly to the addition and subtraction of the gas.

“This recent increase in methane is massive. It’s globally significant. It’s contributed to some of the increase in global warming we’ve seen and shale gas is a major player,” Howarth said in a statement.

“If we can stop pouring methane into the atmosphere, it will dissipate,” he added. “It goes away pretty quickly, compared to carbon dioxide. It’s the low-hanging fruit to slow global warming.”