Bayard Rustin, the chief organizer of the 1963 March on Washington, DC at which Dr. Martin Luther King, Jr gave his Dream speech, traveled in the 1950’s with pacifist A.J. Muste to the Soviet Union to build the bridges that would help save the world from our mutually assured nuclear weapon annihilation.  Later on Bayard often had to work behind the political scenes because of threats about his sexual preferences, his love, his great, beautiful and gay heart.  He would go on to organize NYC’s first anti-Vietnam war protest in 1964, purposely held on Hiroshima day.

Not many people knew that earlier, in 1957, Bayard and the late David McReynolds (both leaders in the War Resisters League), two time U.S. Presidential candidate on the Socialist ticket, the first openly gay candidate for President whose platform prioritized nuclear disarmament, joined together in an actions down at NY’s City Hall with the famed activist Dorothy Day during her sit ins and arrests each year, protesting the insanity of compulsory air raid drills for nuclear attack.  She with others were arrested. 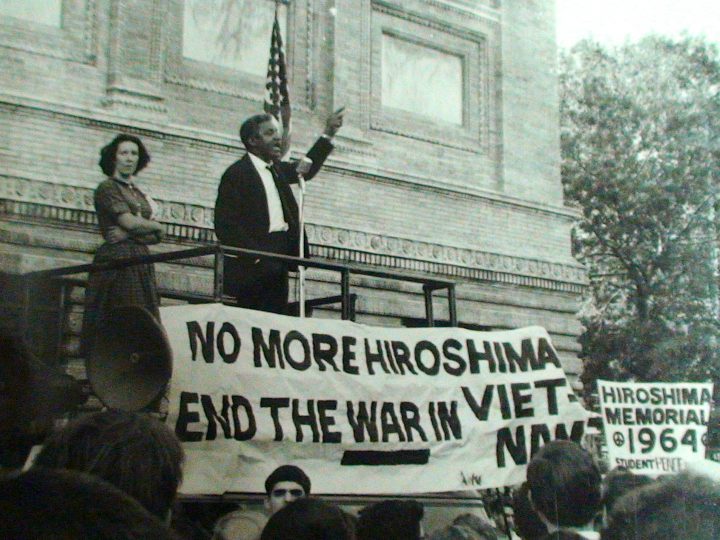 Dorothy Day, co-founder of the Catholic Worker in 1933, stood up against the nuclear bomb from the day of Hiroshima (Aug. 6th, 1945), asking us to feel that these, our brothers and sisters of Japan, had just been vaporized, and there was no reason to celebrate this new level of human atrocity and killing.

Brendan Fay made it to America from the Emerald Isle and found welcome, acceptance for himself as is, and solidarity with the causes lived out in Dorothy Day’s Maryhouse on E 3rd St in downtown Manhattan.   Twenty years ago Brendan then formed and founded the courageous and most joyful alternative to the once closed NYC’s St. Patrick’s Day parade, the “St. Pats For All” parade in Queens.   He had also made a beautiful documentary on the life of Fr. John McNeill borrowing the title from his breakthrough book, “Taking A Chance On God: Liberating Theology for Gays, Lesbians, and Their Lovers, Families, and Friends”.

In NYC at the United Nations on July 7th, 2017, after years of hard work, 122 nations stood up and adopted The Treaty on the Prohibition of Nuclear Weapons:  one wise, brave act taking on the nuclear weapon states bent on incomprehensibly endangering us all each hour of each day, in the false name of their own security.  For its combined efforts ICAN was awarded the Nobel Peace Prize that year.

Brendan Fay picked up on this clear call to action, and while visiting Maryhouse, speaking with longtime friend Joanne Kennedy in particular, he began to find the way to share this triumph of positive accomplishment toward protecting all life and future generations.

Seven people from the Catholic Worker were about to risk their lives in nonviolent action, entering in prayer our most deadly nuclear-weapon-laden submarine base in Kings Bay, Georgia, holding an MLK, Jr. banner, taking on the current catastrophic nuclear policy, and sounding the prophetic call to awaken us from the slumber of the status quo.  (www.kingsbayplowshares7.org)

Brendan had decided that the next “St. Pats For All” parade (in 2018) was to have as its theme and focus; support for the world’s Nuclear Ban Treaty, and divestment from this lethal industry, from this, the very town of Wall Street, the conduit for this incalculably costly business.   He chose for the parade’s Grand Marshal, a local champion in teaching about nuclear abolition, Kathleen Sullivan.   The NYC Divest team marched with its Lavender & Green banner, and heavily leafleted all those attending with an inspired nuclear weapon disarmament and divestment fact sheet.

Center stage that day in Queens, leading the parade’s front banner was long-time supporter and friend of Brendan’s, Council Member Danny Dromm.  Moved by this nuclear activist spirit and the passionate common sense of protecting both city and world, Danny, as Finance Chair of NY’s City Council, wrote, within days, a most inspired letter to NYC’s Comptroller Scott Stringer requesting NYC to divest its many billions in pension funds from the industry.  Within weeks a clear majority, 27 fellow Council Members had signed on.  The discussion and inquiry on how this moral duty will combine with fiduciary responsibility had begun.

At the “St. Pats For All” parade this year (2019), CM Danny Dromm, called out to Brendan and team, “Let’s do a resolution to support this!”   Work began immediately. 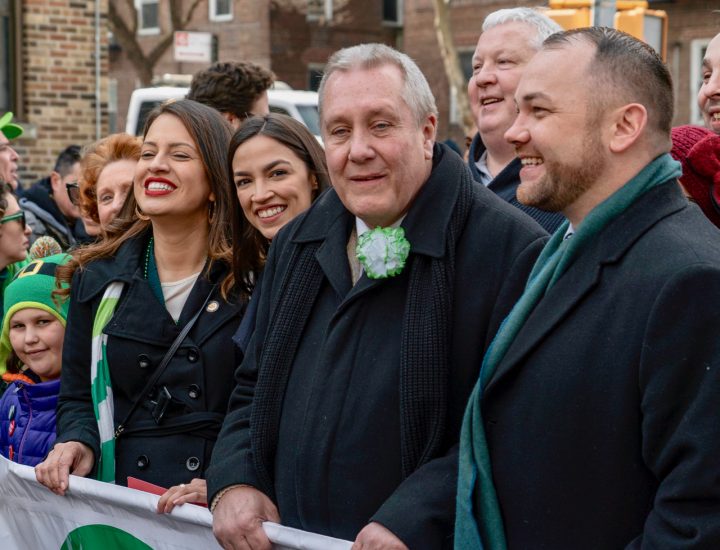 This week, Pride week celebrating Stonewall and the movement, on June 26th, 2019, with Brendan and the NYC Divest team present in the rafters of City Hall, Danny read out and introduced two bills: Resolution 0976-2019 on nuclear disarmament and INT1621-2019 to create a nuclear disarmament and nuclear weapons-free zone advisory committee.

Indeed, in a long line of activist leaders, including many thousands here unmentioned and long working behind the scenes, Gay Pride can tip its hat toward these astoundingly brave, dedicated, wise front runners, trail blazers, leaders for a survivable world, a world to not only live in, but to joyously celebrate together.

The work is not done.   We need each and every one of us to raise awareness and action in our cities, towns and nations.   For those living in NYC, please contact your councilperson (https://council.nyc.gov/districts/) and ask them to support these two bills.

Please thank them for signing on if they have done so.   We are hoping for passage this September, 2019.   If we “can make it here, we can make it anywhere”, and everywhere.

Indeed two of the greatest dangers to all life and especially future generations are climate change and nuclear weapons.   Their urgently needed solutions are both possible and intimately intertwined, as a recent report details, released last week with U.S. Rep. Barbara Lee and Rep. Jim McGovern in DC at the U.S. Congress and given to Rep. Alexandria Ocasio-Cortez and others supporting the Green New Deal.

Pride is often that which occurs just before one falls on one’s face, but here we all can feel a positive genuine Pride in loving, caring and standing tall for not only every gender and sexual orientation, but all humanity and this most rare, precious ecosphere.   Lead onward, together, for a world free of nuclear weapons, now!

By Anthony Donovan, Director of the documentary ​”Good Thinking​: Those Who’ve Tried to Halt Nuclear Weapons“

Anthony Donovan
A political campaigner and activist from the age of 12, ending up in jail three times for Vietnam War nonviolent civil disobedience. Donovan is the producer of several documentaries, including: “Dialogues: A more effective path to deal with global terrorism" (2004), and “Good Thinking, Those Who’ve Tried To Halt Nuclear Weapons” (2015). His long time passion remains the abolition of nuclear weapons.