The East Siberian Arctic Shelf (“ESAS”) is the epicenter of a methane-rich zone that could turn the world upside down.

Still, the ESAS is not on the radar of mainstream science, and not included in calculations by the IPCC (Intergovernmental Panel on Climate Change), and generally not well understood. It is one of the biggest mysteries of the world’s climate puzzle, and it is highly controversial, which creates an enhanced level of uncertainty and casts shadows of doubt.

The ESAS is the most extensive continental shelf in the world, inclusive of the Laptev Sea, the East Siberian Sea, and the Russian portion of the Chukchi Sea, all-in equivalent to the combined landmasses of Germany, France, Great Britain, Italy and Japan.

The region hosts massive quantities of methane (“CH4”) in frozen subsea permafrost in extremely shallow waters, enough CH4 to transform the “global warming” cycle into a “life-ending” cycle. As absurd as it sounds, it is not inconceivable. 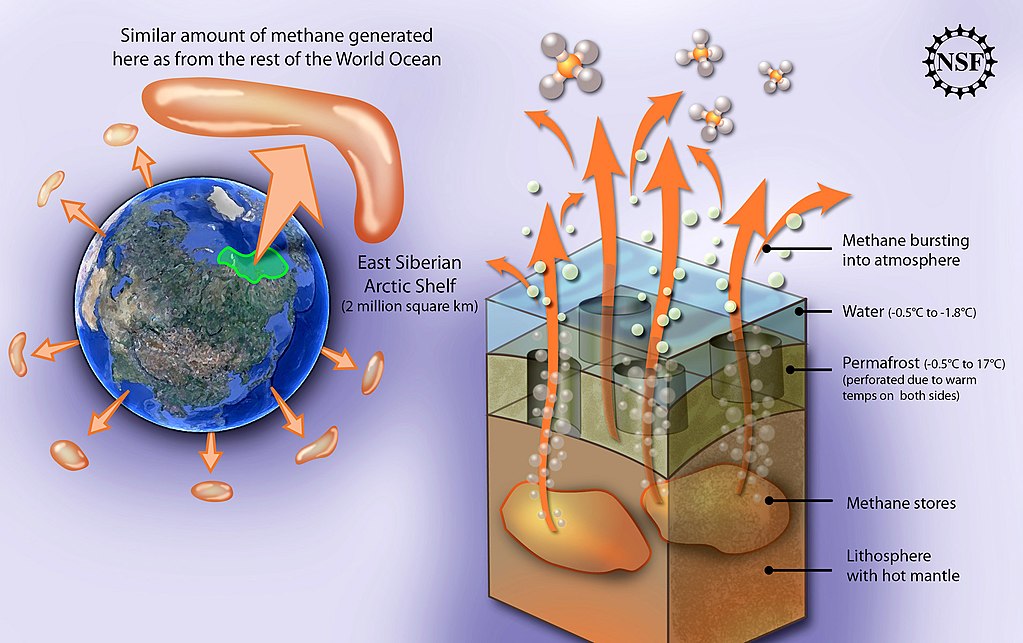 The permafrost of the East Siberian Arctic Shelf (an area of about 2 million kilometers squared) is more porous than previously thought. The ocean on top of it and the heat from the mantle below it warm it and make it perforated like Swiss cheese. This allows methane gas stored under it under pressure to burst into the atmosphere. The amount leaking from this locale is comparable to all the methane from the rest of the world’s oceans put together. Methane is a greenhouse gas more than 30 times more potent than carbon dioxide. Credit: Zina Deretsky, National Science Foundation

Ongoing research to unravel the ESAS mystery is found in very few studies, almost none, except by Natalia Shakhova (International Arctic Research Center, University of Alaska/Fairbanks) a leading authority, for example: “It has been suggested that destabilization of shelf Arctic hydrates could lead to large-scale enhancement of aqueous CH4, but this process was hypothesized to be negligible on a decadal–century time scale. Consequently, the continental shelf of the Arctic Ocean (AO) has not been considered as a possible source of CH4 to the atmosphere until very recently.” (Source: Natalia Shakhova, et al, Understanding the Permafrost–Hydrate System and Associated Methane Releases in the East Siberian Arctic Shelf, Geosciences, 2019: https://www.mdpi.com/2076-3263/9/6/251/htm)

Shakhova’s “until very recently” comment explains, in part, why the IPCC does not include ESAS methane destabilization in its calculations. Meanwhile, Shakhova’s research has unearthed a monster in hiding, but thankfully, mostly in repose… for the moment. Still, early-stage warning signals are clearly noticeable; ESAS is rumbling, increasingly emitting more and more CH4, possibly in anticipation of a “Big Burp,” which could put the world’s lights out, hopefully in another century, or beyond, but based upon a reading of her latest report in Geosciences, don’t count on it taking so long.

Shakhova’s research is highlighted in a recent article in Arctic News: “When Will We Die?” d/d June 10, 2019, which states: “Imagine a burst of methane erupting from the seafloor of the Arctic Ocean that would add an amount of methane to the atmosphere equal to twice the methane that is already there.”

Horror of horrors, the resulting equation is disturbing, to say the least, to wit: Twice the amount of CH4 that is already in the atmosphere equals a CO2e (carbon dioxide equivalent) of 560 ppm, assuming CH4 is 150xs the potency of CO2 in its initial years. And, adding that new number to current CH4/CO2e of 280 ppm to current CO2 levels of 415.7 ppm, according to readings at Mauna Loa, Hawaii, equals total atmospheric CO2 of 1256 ppm.

In other words, if ESAS springs a big fat leak, the Big Burp, which would only be <5% of the existing frozen methane deposit; it is possible that atmospheric CO2e would zoom up go as high as 1256 ppm.

A recent third-party study, also referenced in the aforementioned Arctic News article d/d June 10th, concluded that at 1200 ppm atmospheric CO2 global heating cranks up by 8°C, or 14.4°F, within a decade. (Source: Arctic News d/d June 10, 2019). Truth be known, that scenario is not problematic, it’s catastrophic and too far along to be classified as a problem. After all, problems can be fixed; catastrophes are fatal.

According to Shakhova’s research, as referenced in Geosciences/ 2019: “Releases could potentially increase by 3–5 orders of magnitude, considering the sheer amount of CH4 preserved within the shallow ESAS seabed deposits and the documented thawing rates of subsea permafrost reported recently. The purpose of this paper is to introduce the ESAS permafrost–hydrates system, which is largely unfamiliar to scientists,” Ibid. (Side note: 3 orders of magnitude is equivalent to 1,000, i.e., a large methane release.)

More from Shakhova: “Here we present results of the first comprehensive scientific re-drilling to show that subsea permafrost in the near-shore zone of the ESAS has a downward movement of the ice-bonded permafrost table of ~14 cm (6 inches) year over the past 31–32 years… However, recent studies show that in some areas very recently submerged permafrost is close to or has already reached the thaw point,” Ibid.

Shakhova’s studies are based upon marine expeditions, including drill campaigns that investigate the thermal regime, geomorphology, lithology, and geocryology of sediment cores extracted from boreholes drilled from marine vessels and not based solely upon climate models calculated on desktop computers.

In conclusion, as the world community continues to accept the reality of climate change as an existential threat, which fact is emphatically spotlighted by the likes of the Children’s Crusade, originating out of Sweden, and the Extinction Rebellion, originating out of the UK, it is important to emphasize the timing factor. Nobody knows 100% for certain how the climate crisis will turn out, but there is pretty solid evidence that the issue, meaning several ecosystems which are starting to collapse in unison, is accelerating, by a lot. So, there is not much time left to do something constructive, assuming it’s not already too late. Speaking of which, a small faction of climate scientists has already “tossed in the towel.”

After all, it’s not that hard to understand their point of view as many ecosystems have already hit tipping points, which means no turning back, no fixes possible, but still, (and, here’s the great hope) nobody really knows 100% for sure how all of this will play out.

Nevertheless, in a perfect world that really/truly “follows the science” a Worldwide All-In Coordinated Marshall Plan to do “whatever it takes” would already be in a full-blastoff mode.

Robert Hunziker
MA, economic history DePaul University, awarded membership in Pi Gamma Mu International Academic Honor Society in Social Sciences is a freelance writer and environmental journalist who has over 200 articles published, including several translated into foreign languages, appearing in over 50 journals, magazines, and sites worldwide. He has been interviewed on numerous FM radio programs, as well as television.