“So I’m curious, given how daunting the issue is, why aren’t you so filled with despair that you’re staying on your couch every day, and just waiting for the apocalypse?”

That was one of the questions Rep. Alexandria Ocasio-Cortez put to 16-year-old Swedish activist Greta Thunberg when the two progressive leaders met via video link for a conversation on the climate crisis, what it will take to create a sustainable and equitable future for all, and reasons for hope in the midst of so much darkness.

“What I find encouraging is having all these people who are fighting on different sides in different ways, to create a better future and to make us avoid catastrophic climate breakdown.”
—Greta Thunberg

Thunberg—who helped spark a global movement of youth climate activism with her lonely sit-down strike outside of the Swedish Parliament building last year—has never shied away from the seemingly endless reports of environmental devastation, the grim and urgent warnings from scientists, and the alarming graphics showing that carbon emissions continue to climb at an unsustainable pace.

Rather, she has argued, it is more important than ever to fearlessly confront these facts—and act accordingly.

Thunberg echoed this sentiment in her conversation with Ocasio-Cortez, an abridged version of which was published by The Guardian on Saturday.

“It’s already here and it’s going to get worse,” Thunberg said of the climate emergency that she has tirelessly called attention to in weekly youth-led “Friday for Future” protests, which have gone global since they kicked off last year.

“Before I started school striking,” said Thunberg, “I was so depressed and I didn’t want to do anything, basically. But what I find encouraging is having all these people who are fighting on different sides in different ways, to create a better future and to make us avoid catastrophic climate breakdown.”

The reason young people have been leading the push for bold solutions to the climate crisis, Thunberg said, is because “it is our future that is at risk. Most of us know that this is going to affect us in our lifetimes—it’s not just something that might happen in the future.” 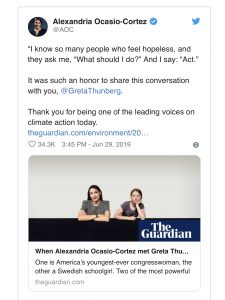 Ocasio-Cortez, the Democratic congresswoman from New York who helped push the Green New Deal into the national political conversation within weeks of taking office, said she too felt despair when honestly confronting systemic crises in the United States, such as the growing income gap between the rich and everyone else.

“I felt so powerless, and as though there was nothing I could do that could effectively counter the enormous number of societal structures that are designed in the U.S. to keep the working class poor, and to keep the rich, richer,” said Ocasio-Cortez.

But like Thunberg, Ocasio-Cortez said she found hope in joining the fight for climate justice.

“I think what was profoundly liberating,” she said, “was engaging in my first action—when I went to Standing Rock, in the Dakotas, to fight against a fracking pipeline. It seemed impossible at the time. It was just normal people, showing up, just standing on the land to prevent this pipeline from going through. And it made me feel extremely powerful, even though we had nothing, materially—just the act of standing up to some of the most powerful corporations in the world.”

Read the abridged conversation between Thunberg and Ocasio-Cortez at The Guardian.