In Show of Demand for Climate Action, Green Parties Surge in EU Elections

“A substantial share of the world has finally decided climate action is necessary now.”

Underscoring the growing demand for bold climate action that has found expression in global youth-led strikes, marches, and civil disobedience over the past year, Green parties across Europe had their strongest-everEU parliamentary election performance after running on a platform of transformative environmental change.

“It’s time the European Union puts all its efforts into a sustainable future and starts caring for its citizens.”
—Bas Eickhout, European Greens

“The Green Wave has swept across Europe. We want to thank everyone who has voted for change and climate action,” Ska Keller, a German MEP and one of the Greens’ leading candidates for European Commission president, said in a statement Sunday following four days of continent-wide voting.

“This trust given to us by voters is both a task and a responsibility to put green polices into action,” said Keller.

As The Guardian reported, the “Greens’ surge was strongest in Germany, where Die Grünen finished second behind Angela Merkel’s center-right CDU with almost 21 percent of the vote, according to provisional estimates—nearly double their 2014 total.”

Greens also had strong showings in Finland, France, and Ireland on the back of higher-than-usual voter turnout.

“Finland’s Greens… came second with 16 percent of the vote, while in a major upset, Europe Écologie-Les Verts, led by a former senior Greenpeace figure, came third in France with 13.3 percent, up from 8.9 percent,” according to The Guardian. “Against all expectations, a Portuguese Green Party won its first European parliamentary seat.”

Projections Sunday indicated that, overall, Greens secured 71 seats in the European Parliament—up from 52 seats five years ago. According to exit polling, the Greens’ surge was bolstered by strong support from young voters.

Bas Eickhout, vice president of the European Greens, said the election outcome gives the party a “mandate and duty to drive change in Europe.”

“Any new Commission should take this into account, as our program of climate protection, social justice, and defense of rule of law and democracy gave the Greens this important win,” Eickhout said in a statement. “It’s time the European Union puts all its efforts into a sustainable future and starts caring for its citizens.” 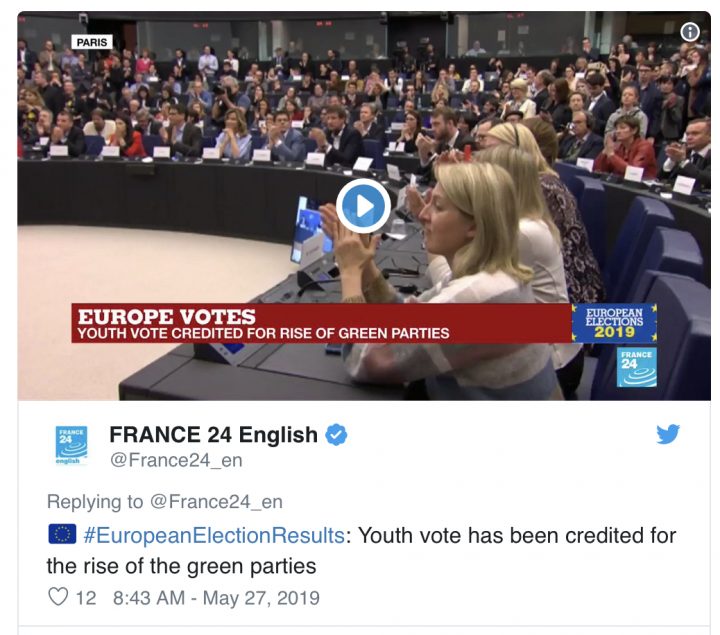 With much of the media’s attention centered on electoral gains by far-right parties amid Brexit chaos, observers argued that gains by the Greens—particularly as the climate science becomes more grim by the day—should be the focus of headlines across the globe.

“The best news of the night is Green parties winning more seats than ever in EU elections,” tweeted environmentalist Madalina Preda. “The people know we need climate action now.” 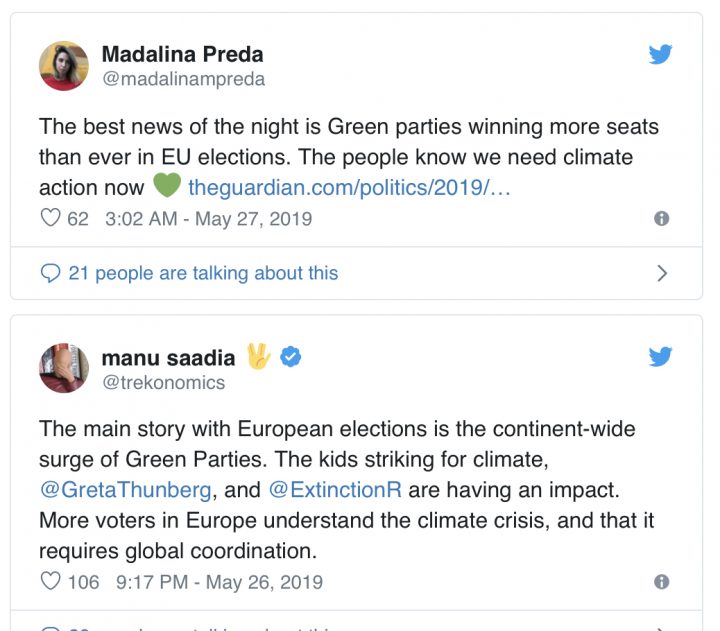 “A substantial share of the world has finally decided climate action is necessary now,” McKibben tweeted.