Today, Quito woke up as cold as usual, but that was not the first thing that Ecuadorians noticed when their alarms went off. At 5 a.m., Ecuadorian time, President Lenín Moreno announced to everyone that the country was to stop providing asylum to Julian Assange, of course, asserting Ecuador’s sovereign right. This decision was later reaffirmed by the foreign minister, José Valencia, who also revealed 9 reasons for terminating Assange’s diplomatic asylum. Among the nine reasons, the following stand out: Assange’s interference in the external affairs of other states, his bad behaviour, the Ecuadorian government’s concern for Assange’s health, and even inconsistencies in his naturalization.

The reactions to this first news were not long in coming, and of course, they sounded to the rhythm of the mass media who were pointing out that these mobilizations were organized by “Correaism,” (supporters of previous president Rafael Correa) a label which unconsciously causes reason to be clouded by thoughts of retribution in the opinion of Ecuadorian society. We were no longer talking about someone whose rights had been stripped away. Now, it was all about Correa’s mistake, the so-called “lost decade” that the current president is trying so hard to demonstrate.

But the memory is fragile, and Julian is no exception to this principle. In 2010 he was almost a star, the man of the moment, the activist of the moment, a world hero, the face of rebellion and an anti-imperialist. All this because of the uproar caused by the WikiLeaks site that published news that the general public should not be aware of, such as the Baghdad attack orchestrated by the U.S. government. Julian Assange is and was the most visible face of the site and for that reason great machinery moved into action. Months after his leaks, he was accused of raping two women and his arrest was called for in Sweden. Time passed and he sought asylum at the Ecuadorian embassy in London, which he was granted immediately. Later, Julian Assange would even be listed as a naturalized Ecuadorian. But those days are long gone.

Today, in response, a sit-in was held in front of Ecuador’s Ministry of Foreign Affairs located in the centre of the capital. The afternoon was almost over and people arrived little by little, in one moment there were more press than protesters, all were expectant to show the discontent of the people because of this decision regarding diplomatic asylum. TeleSur was ready, HispanTV too, several journalists and photographers. But there was someone else getting ready minute by minute, the national police. You don’t see such a display of police unless the president is present. The shouts began, denouncing Lenín as a traitor and Valencia as a murderer, but not a single shout was heard in front of the Foreign Ministry until the rain started half an hour later.

Cyclists, green handkerchiefs, foreigners, mothers, fathers, academics, students and others could be seen in the shouting, but there were too few. We did not reach 50 demonstrators, which makes it easier to understand the true state of social consciousness. If in 2010 he was a hero, today it seems that people see him as a forgettable mistake. Ignoring the fact that Assange’s work on WikiLeaks is of great historical, social, political and technological importance, he is a human being and has just been sent to the slaughterhouse. That’s why 50 people will never be enough for issues like these where life is at stake. As I circled the march and with the police still nervous, I heard comments from the protesters like: “the police think we’re stupid” “they come to beat us and they think we don’t know”. But at one point everyone started taking pictures, videos, and wanting selfies; it seemed that only the “old guard” understands the importance of a march and of calling out an injustice that has happened. And as if we were taking the pulse of society, every shout started and stopped with a longer and longer pause in which the silence became more eternal. Have we lost our conscience and our memory?

And as a last detail, after the termination of diplomatic asylum, the foreign minister informed the authorities in London in order for them to go in and get Julian. And almost like a Swiss watch, the United States requested the United Kingdom to extradite Julian Assange, alleging the crime of computer piracy. An almost prophetic coincidence and yet no surprise. 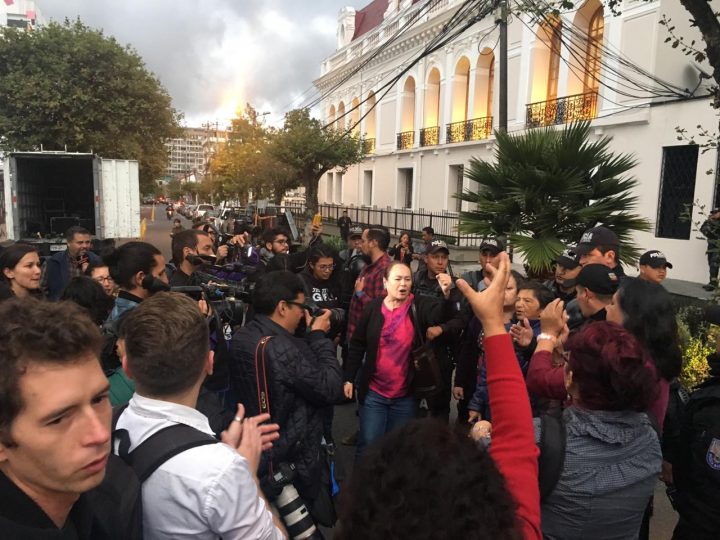 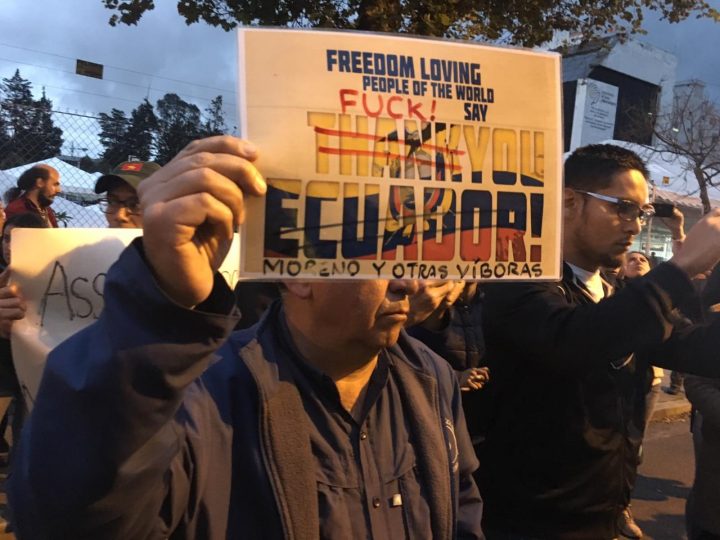