“The jury resoundingly held Monsanto accountable for its 40 years of corporate malfeasance.”

In a victory for consumers and yet another massive blow to Monsanto, a federal jury on Wednesday found the company liable for causing a California man’s cancer and ordered it to pay $80 million in damages.

“Bayer-Monsanto has known for decades the cancer-causing properties of Roundup, and I applaud the jury for holding the company accountable for failing to warn consumers of the known danger.”
—Ken Cook, Environmental Working Group

“The jury resoundingly held Monsanto accountable for its 40 years of corporate malfeasance and sent a message to Monsanto that it needs to change the way it does business,” said the legal team of 70-year-old Edwin Hardeman, who was diagnosed with non-Hodgkin’s lymphoma (NHL) in 2015 after using Roundup on his property for more than two decades.

“It is clear from Monsanto’s actions that it does not care whether Roundup causes cancer, focusing instead on manipulating public opinion and undermining anyone who raises genuine and legitimate concerns about Roundup,” Hardeman’s lawyers added.

Earlier this month, the San Francisco jury ruled that Roundup was a “substantial factor” in the development of Hardeman’s cancer.

In its Wednesday ruling, the jury said Monsanto—which was acquired by German pharmaceutical giant Bayer last year—should be held liable for failing to give sufficient warnings about Roundup’s cancer risks.

“Clearly, the testimony that informed the jury’s decision was Bayer-Monsanto hiding Roundup’s carcinogenic properties, manipulating the science, and cozying up with EPA so it would not have to warn consumers of its dangerous product,” Ken Cook, president of the Environmental Working Group, said in a statement.

“Bayer-Monsanto has known for decades the cancer-causing properties of Roundup, and I applaud the jury for holding the company accountable for failing to warn consumers of the known danger,” Cook added. “This verdict puts Bayer’s back firmly up against the wall as the cost of litigation mounts and its stock price gets pummeled once again.” 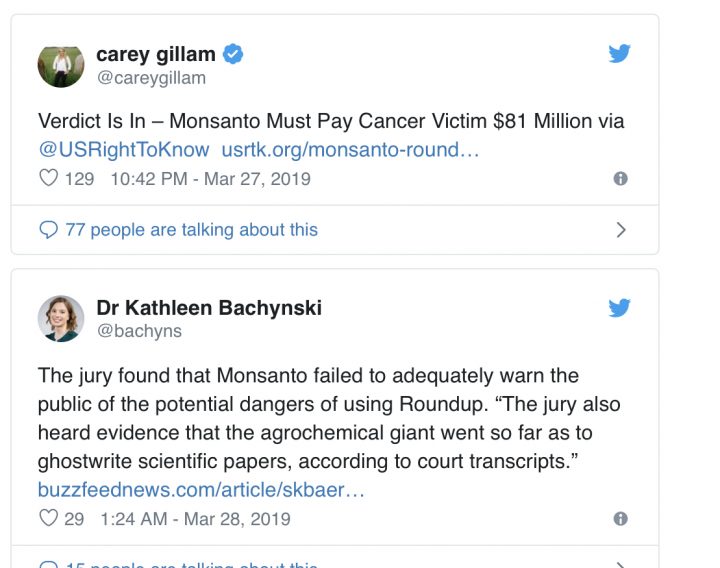 Bayer said it is “disappointed” in the jury’s decision and plans to appeal.

The latest ruling against Monsanto comes as the company is facing thousands of similar lawsuits nationwide.