The United States has been working with oligarchs in Venezuela to remove President Maduro since he came to office in 2013 after the death of Hugo Chavez and was re-elected that year. After he won re-election to another six-year term in 2018, the regime change planners sought new strategies to remove Maduro, including an assassination attempt last August. The coup campaign escalated recently with the self-appointment of president Juan Guaido, who President Trump and US allies have recognized. Now, the ongoing coup attempt is escalating through a strategy of humanitarian intervention.

Trump has been talking openly about war to take control of Venezuela’s vast oil reserves since mid-2017. Pentagon and former administration officials, who have since been removed from office, opposed the action. Now, Trump is surrounded by neocons who share his goal of removing Maduro and taking control of the country’s natural resources. War is an option being openly considered.

The US has no excuse to legally attack Venezuela. As Defense One reports,“International law forbids ‘the threat or use of force against the territorial integrity or political independence of any state.’” There are two exceptions mentioned in the UN Charter: self-defense and authorization by the U.N. Security Council, neither of which have been met in Venezuela. Domestically, Trump would also need the US Congress to authorize an attack, which is unlikely with a Democratic-controlled House not because Democrats oppose war but because they oppose Trump.

This weekend, the humanitarian intervention began to unfold when the coup president, Juan Guaido, announced the imminent distribution of humanitarian aid. Guaido announced the aid would be gathered at three points, and Venezuela’s army would be pressured to allow it into the country. The collection centers will be in Colombia, Brazil and on an island in the Caribbean. He announced aid will begin to be distributed in the coming days. He claimed the Venezuela military will have to make a decision whether or not to let this aid in to Venezuela. Guaido said he wants the people to play a supportive role by staying in the streets with demonstrations that will be announced soon.

Also over the weekend, National Security Adviser John Bolton said the US will send “critical supplies” requested by Guaido. Previously, Bolton has openly called for a military coup and sanctions to starve millions of Venezuelans into submission. On Twitter, USAID administrator Mark Green shared images of boxes embossed with the US flag en route to Venezuela. 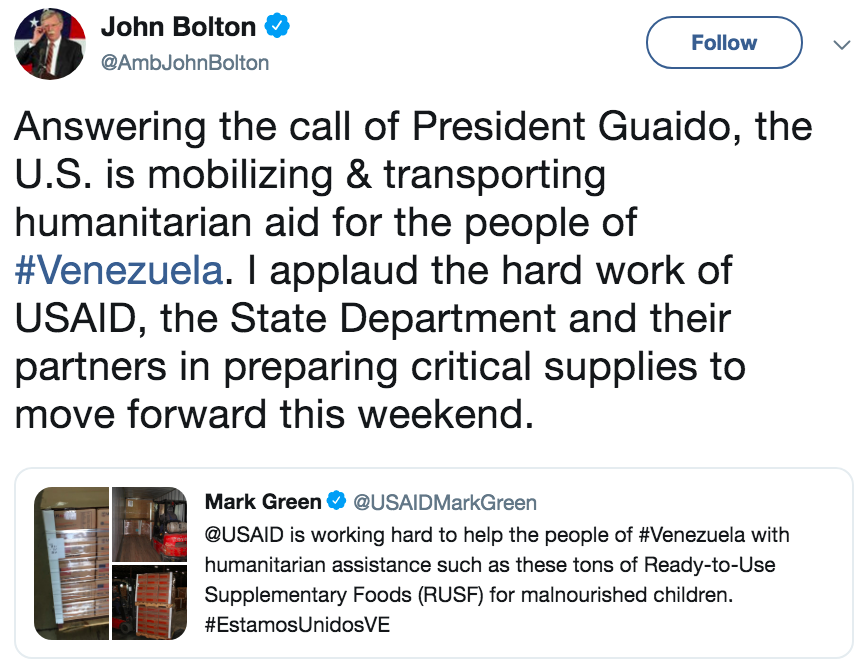 Elliot Abrams, who has a long history of war crimes and was convicted in the Iran-Contra scandal, said the US government is considering opening a “humanitarian corridor” and has maintained contacts with Brazil and Colombia on the issue. He acknowledged that Maduro’s “cooperation” would be necessary to transport the aid to the country. El Pais reported, “The opening of this supply channel could require the participation of troops, whether Americans or from another country in the region, something that Chavism interprets as a clear threat.”

Vice President Mike Pence spoke this week about the deployment of humanitarian assistance with Carlos Vecchio, Guaidó’s ambassador to the United States, as well as Julio Borges, appointed as representative to the Lima Group. Borges will ask the Lima Group, which meets in Canada this week, for the “urgent” opening of a humanitarian corridor. Canada has played a junior role in the ongoing coup. Trudeau, who also levied economic sanctions against Venezuela, promised $53 million in humanitarian aid. Media critical of the coup have been denied access to these meetings

The United States launched this major operation in coordination with the right-wing governments of Colombia and Brazil, the most belligerent anti-Maduro allies of Guaido. The US National Security Council confirmed on Saturday that the deployment of aid has already begun.  The initial aid will contain medicines, surgical supplies, and nutritional supplements. It was scheduled to come from USAID to Bogota on Monday and then be moved for storage in a collection center in the border city of Cúcuta, the main entrance route for Venezuelans migrating to Colombia. Cúcuta has a high presence of Colombian paramilitaries and smuggling mafias and is where those who attempted to assassinate Nicolas Maduro last year were trained.

One of the goals of the humanitarian aid is to divide the Venezuela militarywhich has refused to recognize Guaido. They seek to deepen the pressure on the military in order to break the solidarity of the Maduro government. TIME Magazine reports, “The aid has become something of a litmus test for the military’s backing of Maduro.” Sen. Marco Rubio (R-FL), said on Twitter that, “Military & police leaders in #Venezuela must now decide to either help food & medicine reach people, or help #Maduro instead.”

UN Secretary-General, Antonio Guterres, who has not recognized Guaido, said the United Nations “will not be part of” distributing the aid, as it wants to maintain “credibility” in order to help “find a political solution to the crisis.”

El Pais reports that “Diplomats from several Latin American countries and from the more moderate sectors of the opposition fear that this will serve as a pretext to drag the conflict into the military.” President Maduro has repeatedly rejected the entry of humanitarian aid because he knew it would provide justification for foreign intervention. He knows the US seeks Venezuela’s oil and other resources,“gold, gas, iron, diamonds, other material riches.”

Maduro called on the international community to stop the US threats of war against Venezuela. He said a war would be a blood bath, a David and Goliath struggle that would “leave Trump bloodstained.” Maduro said the Venezuelan people were prepared to defend their “sacred“ land from a US military invasion, but emphasized that he “prayed to God” such a conflict will never occur. Trump’s “military aggression” must be rejected so that “peace prevails.”

This article was originally published here