The political system in the United States is a plutocracy, one that works for the benefit of the wealthy, not the people. Although we face growing crises on multiple fronts – economic insecurity, a violent and racist state, environmental devastation, never-ending wars and more – neither of the Wall Street-funded political parties will take action to respond. Instead, they are helping the rich get richer.

The wealth divide has gotten so severe that three people have more wealththan the bottom 50% of people in the country. Without the support of the rich, it is nearly impossible to compete in elections. In 2016, more than $6.5 billion was spent on the federal elections, a record that will surely be broken in 2020. More than half that money came from less than 400 people, from fewer than 150 families.

People are aware of this corruption and are leaving the two Wall Street parties. According to the census, 21.4% of people do not register to vote, and in 2018, less than a majority of registered voters voted. According to Pew Research, independents (40% of voters) outnumber Democrats (30%) and Republicans (24%). The largest category of registered voters is non-voters. Yet, the media primarily covers those who run within the two parties, or billionaire independent candidates who do not represent the views of most people.

This raises a question for social movements: What can be done to advance our agenda over the next two years when attention will be devoted mostly to two parties and the presidential race? 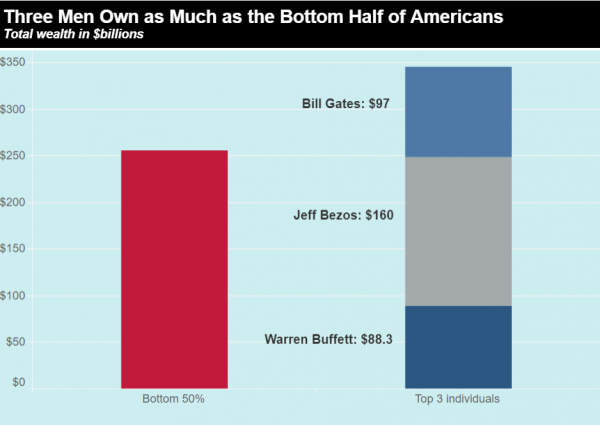 Progressives Failed to Make the Democratic Party a Left-Progressive Party

People in the United States are trapped in an electoral system of two parties. Some progressives have tried — once again — to remake the Democratic Party into a people’s party.

We interviewed Nick Brana, a former top political organizer for the Sanders presidential campaign, on the Popular Resistance podcast, which will be aired Monday, about his analysis of the Democratic Party. Brana describes the efforts of progressives to push the party to the left over the past three years and how they were stopped at every turn. They tried to:

Further cementing their power, Democrats added a “loyalty oath” which allows the DNC chair to unilaterally deny candidates access to the ballot if he deems the candidate has been insufficiently “faithful” to the Party during their life. And the DNC did nothing to remove corporate and billionaire money from the primary or the Party, ensuring Wall Street can continue purchasing its politicians.

The results of the 2018 election show the Blue Wave was really a Corporate Wave. Brana describes how only two progressives out of 435 members of Congress unseated House Democrats in all of 2018: Alexandria Ocasio-Cortez and Ayanna Pressley. When Pelosi was challenged as leader of the House Democrats, she was challenged from a right-wing Blue Dog Democrat, not a progressive Democrat, with many “progressives” including AOC and Rep. Jayapal speaking up for Pelosi’s progressive credentials.

In contrast to the failure of progressives, the militarists had a banner 2018 election. The 11 former intelligence officials and veterans were the largest groups of victorious Democratic challengers in Republican districts. Throughout the 2018 election cycle, Democratic Party leaders worked against progressive candidates, for instance pushing them to oppose Medicare for all.

This is an old story that each generation learns for itself: the Democratic Party cannot be remade into a people’s party. It has been a big business party from its founding as a slaveholders party in the early 1800s, when slaves were the most valuable “property” in the country, to its Wall Street funding today. Lance Selfa, in “The Democrats: A Critical History,” shows how the Democratic Party has consistently betrayed the needs of ordinary people while pursuing an agenda favorable to Wall Street and US imperialism. He shows how political movements from the union and workers movements to the civil rights movement to the antiwar movement, among others, have been betrayed and undermined by the Democratic Party.

Social Movements Must Be Independent of the Corporate Parties

The lesson is mass movements need to build their own party. The movement should not be distracted by the media and bi-partisan politicos who urge us to vote against what is necessary for the people and planet. At this time of crisis, we cannot settle for false non-solutions.

Howie Hawkins, one of the founders of the Green Party and the first candidate to campaign on a Green New Deal, describes, in From The Bottom Up: The Case For An Independent Left Party, how Trumpism is weakening as its rhetoric of economic populism has turned into extreme reactionary Republicanism for the millionaires and billionaires. He explains that Democrats are not the answer either, as “they won’t replace austerity capitalism and militaristic imperialism to which the Democratic Party is committed.”

The result, writes Hawkins, is we must commit ourselves “to build an independent, membership-based working-class party.” Even the New Deal-type reforms of Bernie Sanders “do not end the oppression, alienation, and disempowerment of working people” and do not stop “capitalism’s competitive drive for mindless growth that is devouring the environment and roasting the planet.”

Hawkins urges an ecosocialist party that creates economic democracy, i.e. social ownership of the means of production for democratic planning and allocation of economic surpluses as well as confronting the climate crisis. He explains socialism is a “movement of the working class acting for itself, independently, for its own freedom.”

He urges membership-based parties building from the local level that are independent of the two corporate-funded parties.  Local branches would educate people on issues to support a mass movement for transformational change. Hawkins is a long-time anti-racism activist. He became politically active as a teenager when he saw the mistreatment of the Mississippi Freedom Democrats, who elected sharecropper Fannie Lou Hamer as their co-chair. He believes a left party must confront racial and ethnic tensions that have divided the working class throughout its history.

Hawkins points out the reasons why the time is ripe for this. Two-thirds of people are from the working class compared to one-third in 1900. The middle class (e.g. teachers, nurses, doctors, lawyers, technicians) holds progressive positions on policy issues creating super-majority support for critical issues on our agenda. The working and middle classes are better educated than ever. Over the last forty years, their living standards have declined, especially the younger cohort that is starting life in debt like no other generation. Finally, the environmental crisis is upon us and can no longer be ignored creating a decisive need for radical remaking of the economy. 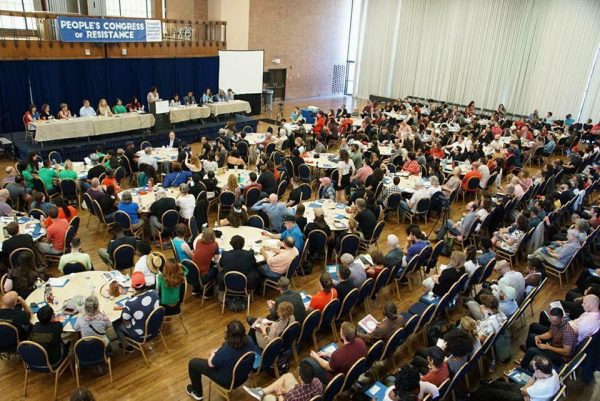 Critical Issues To Educate And Mobilize Around

Popular Resistance identified a 16 point People’s Agenda for economic, racial and environmental justice as well as peace.  Three issues on which we should focus our organizing over the next few years include:

National Improved Medicare For All: The transformation of healthcare in the US from an insurance-based market system to a national public health system is an urgent need with over 100,000 deaths annually that would not occur if we had a system like the UK or France, two-thirds of bankruptcies (more than 500,000 per year) are due to medical illness even though most of those who were bankrupted had insurance, 29 million people do not have health insurance and 87 million people are underinsured.

While many Democrats are supporting expanded and improved Medicare for all, including presidential candidates, the movement needs to push them to truly mean it and not to support fake solutions that use our language, e.g. Medicare for some (public options, Medicare buy-ins and reducing the age of Medicare). Winning Medicare for all will not only improve the health of everyone, it will be a great economic equalizer for the poor, elderly and communities of color. This is an issue we can win if we continue to educate and organize around it.

Join our Health Over Profit for Everyone campaign.

Enacting a Green New Deal. The Green New deal has been advocated for since 2006, first by Global Greens, then by Green Party candidates at the state leveland then by Jill Stein in her two presidential runs. The issue is now part of the political agenda thanks to Alexandria Ocasio-Cortez. She and Senator Ed Markey led the introduction of a framework for a Green New Deal, which is supported by more than 50 Democrats including many presidential candidates.

Their resolution is a framework that the movement needs to educate and organize to make into real legislation to urgently confront the climate crisis, which has been mishandled by successive US presidents. The movement must unite for a real Green New Deal.

The Green New Deal has the potential to not only confront the climate crisis by shifting to a carbon-free/nuclear-free energy economy but to also shift to a new economy that is fairer and provides economic security. Remaking energy so it serves the people, including socializing energy systems, e.g. public utilities, could also provide living wage jobs and strengthen worker’s rights. It will require the remaking of housing, which could include social housing for millions of people, a shift from agribusiness to regenerative agriculture and remaking finance to include public banks to pay for a Green New Deal. The Democratic leadership is already seeking to kill the Green New Deal, so the movement has its work cut out for it.

Stopping Wars and Ending US Empire: US empire is in decline but is still causing great destruction and chaos around the world. US militarism is expensive. The empire economy does not serve people, causing destabilization, death and mass migration abroad as well as austerity measures at home. Over the next decade, the movement has an opportunity to define how we end empire in the least destructive way possible.

As US dominance wanes, the US is escalating conflicts with other great powers. The US needs to end 15 years of failed wars in the Middle East and 18 years in Afghanistan. In Latin America, US continues to be regime change against governments that seek to represent the interests of their people especially in Venezuela where the threat of militarism is escalating, but also in Nicaragua, Bolivia, and Cuba. The migrant issue being used by Trump to build a wall along the US-Mexican border is created by US policies in Central America. And, the US needs to stop the militarization of Africa and its neocolonial occupation by Africom.

Take action: Participate in the Feb. 23, 2019, international day of action against the US intervention in Venezuela and the “Hands-Off” national protest in Washington, DC on March 16, 2019.

There will also be actions around April 4, when NATO holds its 70th-anniversary meeting in Washington, DC, on the same day as the anniversary of Martin Luther King, Jr.’s death and his Beyond Vietnam speech.

Join the Spring Actions against NATO in Washington, DC.

While the US lives in a mirage democracy with manipulated elections, there is a lot of work we can do to build a mass movement that changes the direction of the country. This includes building independent political parties to represent that movement in elections.