In communiqués from their respective foreign ministries, Mexico and Uruguay have called for an international conference to create the conditions for dialogue between the different political forces in Venezuela.

“The purpose of the conference is to lay the foundations for establishing a new mechanism for dialogue that, with the inclusion of all Venezuelan forces, will contribute to restoring stability and peace in that country,” the text states.

The conveners emphasize their position of neutrality and indicate that those countries and organizations that agree with this vision will be invited to the conclave.

Governments of both countries estimate that more than ten delegations from countries and international organizations will attend the conference in Uruguay.  The conference is scheduled for February 7 in Montevideo, the country’s capital.

Governments have indicated that the decision responds to the call for dialogue made by the Secretary General of the United Nations, António Guterres.

Moreover, the president of Venezuela, Nicolás Maduro, has also reiterated on several occasions his willingness to dialogue with sectors of the opposition and thus guarantee peace in the South American nation.

This gathering aims to be “an inclusive and credible dialogue that once and for all solves the delicate situation that our Venezuelan brothers are going through,” the text continues.

Uruguay, Mexico and the UN are ready to work with members of the international community who “want to back diplomacy.” 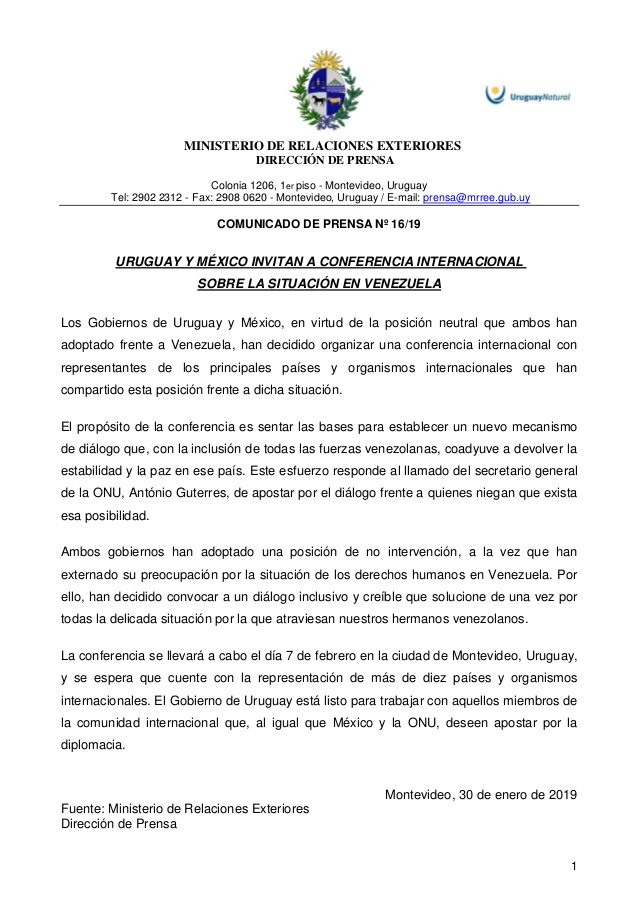 (Report prepared with information from Telesur)