“The United States has a very bad record of intervening in Latin American countries and that must not happen again,” said Sanders. “The future of Venezuela must be left to the Venezuelan people.”

Progressive voices opposed to war, meddling in the complex political conflicts of foreign nations, and concerned about the very likely negative results of yet another U.S. foreign intervention are siding with Sen. Bernie Sanders (I-Vt.) after he drew fire from pro-interventionist forces within the Democratic Party for his stance against regime change in Venezuela.

In an interview with Univision on Thursday, Sanders said that while he doesn’t believe it is his place to say whether or not opposition leader Juan Guaido—who last month, in coordination with the Trump administration, declared himself the “interim president”—should be considered be the legitimate leader of Venezuela, he does back pro-democracy efforts in the country even while opposing anything that resembles a U.S.-backed overthrow of President Nicolas Maduro.

“I think the United States has got to work with the international community to make sure that there is a free and fair election in Venezuela,” Sanders said. However, he added, the U.S. “must not use military force and intervene again as it has done in the past in Latin America… whether it was Chile or Brazil or the Dominican Republic or Guatemala. The United States has a very bad record of intervening in Latin American countries and that must not happen again. The future of Venezuela must be left to the Venezuelan people.”

Sanders’ remarks come as political pressure continues to build inside Venezuela, with opposition forces led by Guaido joining forces with the Trump administration to orchestrate a conflict at the Colombia border this weekend with a showdown over supplies and foreign aid. 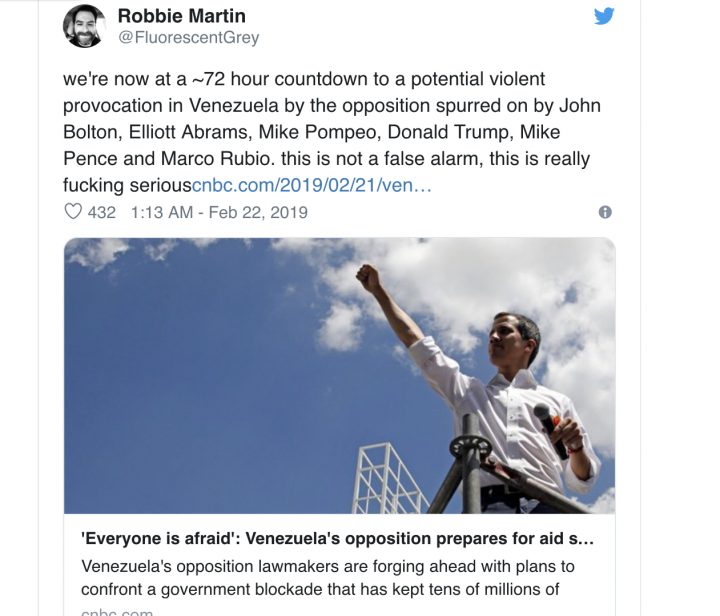 While the editorial pages of newspapers like the Washington Postcontinue to treat what’s happening near the border as a legitimate effortto bring humanitarian aid to struggling Venezuelans, critics say there is no reason whatsoever to treat members of Trump’s foreign policy team—including Secretary of State Mike Pompeo, national security advisor John Bolton, and the State Department’s special representative to Venezuela Elliott Abrams—as having anything but ulterior and nefarious motives. As journalist and media critic Adam Johnson wrote for TruthDig on Friday:

No one actually thinks the same Donald Trump who kicked off his run for the White House by calling Mexicans rapists, and subsequently, as president, left Puerto Rico for dead after Hurricane Maria, cares at all about the Venezuelan poor. No one actually thinks the murderers row of Cold Warriors—led by two of the most extreme right-wingers in American politics, Venezuela envoy Elliott Abrams and national security adviser John Bolton—cares at all about the starving people in Venezuela or their plight. No one reading this, be they right, left, center, libertarian, or communist, actually buys the prevailing narrative that the U.S. is sending “aid” to Venezuela as a humanitarian gesture.

So why is everyone pretending otherwise?

In a recent video at The Intercept produced for his “Intercepted” podcast, journalist Jeremy Scahill and his guests laid out some of the key background on the current situation in Venezuela alongside historical context:

According to Scahill, the Trump administration has been “openly plotting to bring down the government of Nicolas Maduro in Caracas. It is being openly promoted as a campaign to steal Venezuelan oil for the benefit of U.S. corporations, and some powerful Democrats are cheering Trump on and joining the conspiracy.”

But as the crisis contines to snowball, human rights lawyer Alfred de Zayas, former U.N. Independent Expert on the Promotion of a Democratic and Equitable International Order, has been among those criticizing the Trump admininstration, lawmakers from both parties, and members of the corporate media in the U.S. for their ongoing push for regime change in Venezuela:

Meanwhile, in response to Sanders standing firmly against a new regime change effort by the U.S. government—this time in Venezuela—Rep. Donna Shalala (D-Fla.) told Politico that because of such a position, “He is not going to be the nominee of the Democratic Party.” While Shalala represents a district where many Venezuelan-Americans and Venezuelan ex-patriots opposed to Maduro live, she charged that Sanders “has demonstrated again that he does not understand this situation” and said, “I absolutely disagree with his imprecision in not saying Maduro must go.”

As Sophie Weiner put it in her Friday morning headline for Splinter News: “Bernie Sanders Isn’t Pro-Coup Enough for Florida Democrats.” According to Weiner:

Venezuelan President Nicolas Maduro is a dangerous dictator who needs to be ousted from power immediately! All good and honest politicians in America, left or right, should completely support any and all intervention in this matter, and should recognize the opposition party leader, Juan Guaidó, as the rightful ruler of the country!

This is the U.S. foreign policy blob’s line. And god help you if you even stray from it even a little bit, as 2020 Democratic candidate Sen. Bernie Sanders has.

In his response to comments by Shalala and others, Sanders’ deputy chief of staff Ari Rabin-Havt said that such arguments for intervention—without taking into account the consequences—represent “the long and horrific history of American politicians imposing their will on the people of Latin America.” His boss, Robin-Havt reiterated, “stands with the Venezuelan people to demand free and fair elections and for self-determination for all people around the world.”

Ben Rhodes, meanwhile, who served as deputy national security advisor under former President Barack Obama and no dove when it comes to U.S. foreign policy, appeared to agree with those calling Shalala’s remarks a “bit of an overreaction” and warned that it remains very possible to be critical of the Maduro government—as Sanders has been—while still warning against another U.S.-backed overthrow of a foreign government.

“It is possible to think that a) Venezuelans would be much better off without Maduro, and b) Trump’s policy (and bluster) is creating the impression of U.S.-imposed regime change which raises lots of risks, including military intervention,” Rhodes said in a four-part thread on Twitter on Friday morning.

“It doesn’t help that Trump is obviously disingenuous,” Rhodes continued. “He embraces dictators around the world while talking up democracy in Venezuela and Cuba. And he unsubtly—in his SOTU and in Miami—views Venezuela as a domestic political issue tied to his 2020 reelection campaign.”

He concluded by saying that “the political-media consensus that Dems should have no daylight with Trump on Venezuela adds to a tradition: it is seen as politically damaging to oppose U.S.-imposed or supported regime change, despite the results of those efforts (which often get worse after regime change). This mindset leads to repeated mistakes and the removal of any nuance from hugely impactful policy debates.”

While others made clear their skepticism of Rhodes as a reliable voice of anti-interventionist wisdom, journalist Glenn Greenwald gave credit to the comments even as he noted their “(pleasantly) surprising source”: 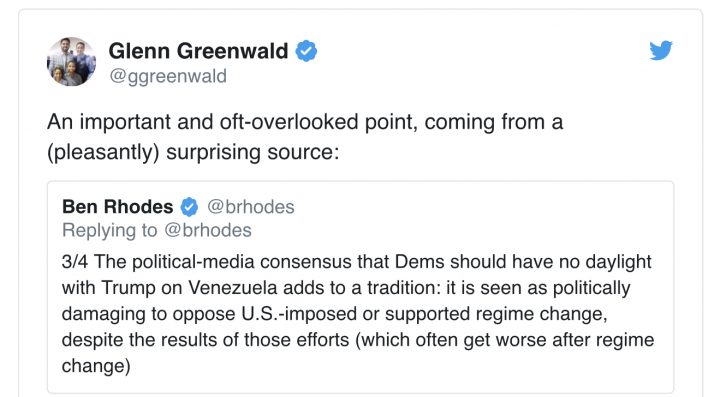 According to Greenwald, Shalala’s objections to Sanders’ position of non-intervention—especially given the people with whom she is aligning—create a troubling indictment of her foreign policy thinking, not his: 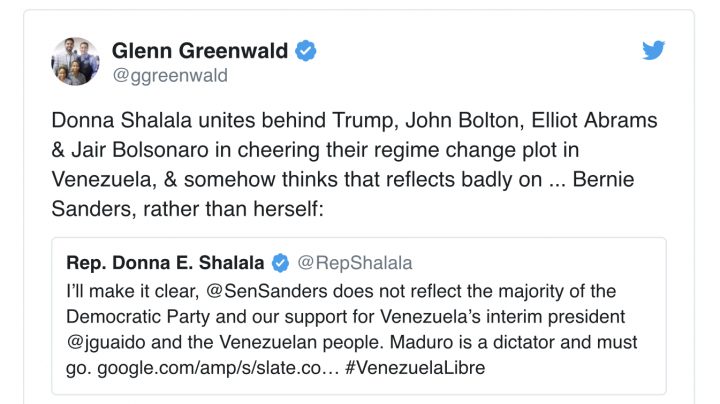