On Wednesday morning, as commuters in Washington D.C. made their way to work, the front page of what appeared to be the Washington Post had people stopping in their tracks. The headline read: “UNPRESIDENTED: Trump hastily departs White House, ending crisis.”

Upon closer inspection, a few things about this free “special edition” didn’t seem quite right. For starters, the paper was dated May 1, 2019, and the tagline read “Democracy awakens in action” instead of the Post’s usual “Democracy dies in darkness.” Meanwhile, the paper itself was filled with stories about a tidal wave of creative resistance — led mainly by women — that had ousted Donald Trump from office.

“Can I get some more copies?” asked one man passing by distributors near the White House. “I’m a federal employee, and my colleagues will love this.”

From a colorful quinceañera dress blockade opposing the border wall to parents and young children engaging in “sippy cup sit-ins” at Sen. Chuck Schumer’s office to protests of Twitter forcing the deactivation of Trump’s account, the stories paint a picture of a potential future without Trump — and the strategic, creative ways to make that happen. 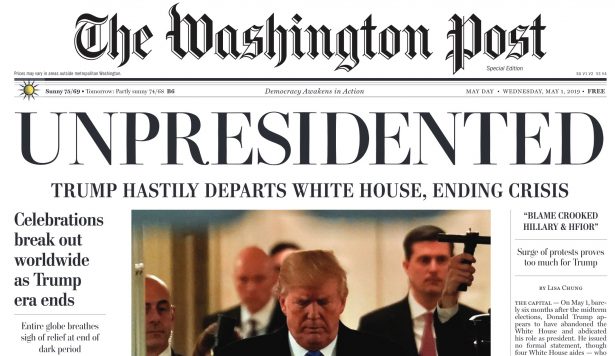 The front page of a “special edition” of the Washington Post put out by the Yes Men.

Two of the masterminds behind this creative stunt are none other than the Yes Men, a pair of high-profile pranksters famous for culture-jamming, impersonation and hoaxes. But this time they weren’t alone. Their action grew out of a nine-month-long collaboration with two female authors and activists: L.A. Kauffman and Onnesha Roychoudhuri.

“The Yes Men — now with women!” Roychoudhuri jokes. “It’s one of those funny things — it’s a Yes Men project, and it’s been spearheaded by two women.”

This was not the first time the Yes Men were involved in producing a fake newspaperwith positive, hopeful stories, allowing people to imagine the future they want to see. They released a fake New York Times in 2008 and a fake New York Post the following year. But this time, they took things a step further: 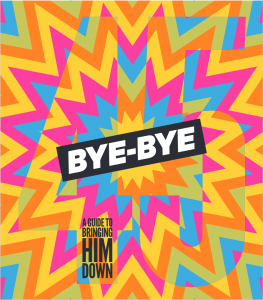 An action guide accompanied each copy of the unauthorized Washington Post.

Each of the 25,000 copies distributed in Washington D.C. includes an action guidepacked with tools and resources to help make these stories become reality. [Editor’s note: Waging Nonviolence will be publishing stories from the action guide in the coming days.]

“It’s a fantasy of the future we want to create, bundled with the tools to create that future,” said Kauffman, who developed the action guide in tandem with Roychoudhuri.

Drawing from a vast body of academic research and activist manuals — by the likes of political scholar Gene Sharp, Serbian resistance group OTPOR, the “Beautiful Trouble” toolbox and others — the action guide distills organizing knowledge down into clear, easily-digestible takeaways for the general public. The stories inside the newspaper apply these principles in realistic scenarios, showing what it all looks like when put into practice.

One example of this dynamic at work can be seen in the paper’s story of a mounting protest movement that culminates with 11 million Americans in the streets opposing the Trump presidency. This example draws on political scientist Erica Chenoweth’s research, which found that active resistance by only 3.5 percent of the population — 11 million in the case of the United States —  is needed to bring down a dictator.

Similarly, the story about a “bundle” of 64 progressive bills — advancing Medicare for all, student loan forgiveness, voting rights protection and a Green New Deal — embodies an important organizing principle: the importance of having a transformative vision. Longtime organizer, author and Waging Nonviolence columnist George Lakey has written extensively about this principle, and — fittingly — the action guide features an excerpt from his new book “How We Win,” which makes the case for proposing alternatives and building new institutions.

The “bundle” was developed to showcase the broad support many progressive policies have across the political spectrum. After the election, Roychoudhuri explained, she was frustrated by the pervasive narrative that the country was more divided than ever. “If you look at the majority, there’s a lot of agreement there,” she said. “So the divide is actually between the majority and a handful of extremists in power.”

Another key principle detailed in the action guide is the “pillars of support” — the idea that people and institutions are what give any regime its power, and therefore should be the targets of protest. The newspaper showcased this principle in action with a story about protesters deciding to target key Congressional leaders instead of Trump himself. Another article followed up on the “pillars of support” principle in a sillier way — describing acts of everyday resistance that created constant inconveniences for Trump administration officials, from being refused restaurant service to matches on dating apps.

Many of the fictional actions featured in the newspaper resemble real acts of resistance that have taken place against the Trump administration, from queer dance protests to the historic numbers of women who have engaged in protests and resistance since Trump’s inauguration.

“These stories show a reality adjacent to what has been in motion already since Trump took office,” Kauffman said. “[Then we tie these to] what has worked in other contexts, both in the United States and around the world.”

The paper took a conscious approach to centering the crucial, often-overlooked role that women — particularly women of color — have played in shaping the creative, coordinated resistance to the Trump agenda. This can be seen not only in the newspaper articles and action guide themselves, but also in the collaborative process that made it all possible.

“Resistance to Trump has been led and shaped by women, and it’s important to keep naming that, celebrating that and finding the joy and humor in that,” Kauffman said.

Another goal of the project, according to Andy Bichlbaum of the Yes Men, is to raise the issue of impeachment and dispel the main arguments against it. “There are a couple of things that come up when you talk about Trump’s impeachment or getting rid of him that we wanted to diffuse,” he said. “One is that Pence is worse and the other is that it could lead to civil war, that he’s not going to go quickly.”

Two stories address these points. The one regarding Pence suggests he would have a “clipped duck” presidency due to a Democratic majority in the House, the taint of Trump’s failed legacy behind him and a greatly weakened base of support. The other story — titled “The civil war that never was” — describes the concern after Trump issues a tweet telling his supporters to defend the presidency and “vote with your trigger finger.” But fears are allayed when a massive turnout of creative, peaceful protesters scares off any die-hard followers. Like many of these stories, this one mirrors a real example of how nonviolent protest overshadowed white supremacist rallies in the wake of the 2017 protests in Charlottesville.

It’s this kind of embedded history and knowledge that the team behind the newspaper and action guide want to impart — so that the millions of newly or recently activated people across the country can learn from the collective wisdom of movements that came before them. That’s why more copies of the newspaper will be handed out at various actions in New York City over the coming weekend, like the Non-March for Disabled Women, to share these tools with a new wave of activists mobilizing for progressive change.

“The resistance to Trump is far from the first movement in American history to face tough times and challenging odds,” Kauffman said. “Movements of the past have learned through experience how slow change can be at times, how much persistence is required, and how much tenacity you need in the face of a powerful opponent.” That being said, the Post hoax doesn’t ignore the exceptionalism of the civil resistance that has become so widespread since Trump was elected.

“People don’t feel in their bones how extraordinary the scale of what is happening now,” Kauffman said. “We are more active in numbers than at any point in U.S. history.”

Roychoudhuri refers to the paper’s vision as “reality adjacent” by portraying existing resistance through a fictional, futuristic lens. “[These stories are] rooted in what has been happening on the ground.”

Instead of seeing the Trump administration as an unprecedented, insurmountable threat to democracy, the action guide contextualizes this presidency within a history of dictatorship and authoritarianism, and shows how nonviolent movements have faced and overcome these regimes for generations.

An action like this does not always have clear outcomes or successes, but plants ideas to foster people’s creativity and allow them to imagine the future they want to see.

“The effects of organizing can rarely be seen in the moment,” Kauffman said. “There’s a faith you have to have.”

Bichlbaum also echoed that this action won’t be judged by a tangible outcome, but by the way it inspires people to renew their resolve to shape the headlines of the future.